Producing a Workforce One Mariner at a Time 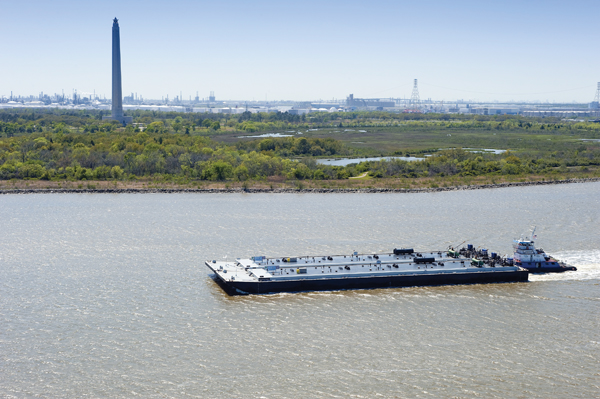 Texas leads the nation in exports, and with marine freight estimated to increase by 43 percent domestically and 67 percent internationally by 2020, the Gulf Coast region braces for what is anticipated in the coming years.

Local companies like Buffalo Marine are not waiting to react; instead they are sending more crews in for the training that is required to move employees up and move new mariners into positions to face the results of rapid global developments.

“I am extremely bullish when it comes to marine transportation,” said Pat Studdert, president of Buffalo Marine. “The Panama Canal’s third set of locks, which can handle much larger container ships, will be fully operational in 2015. Texas ports will benefit from those larger ships calling upon our region. Asian shippers realize that the business friendly and regulatory unencumbered environment in this part of the country, as compared to the west coast states such as California, ensure that the intermodal goods can be moved less expensively through the Gulf Coast.”

M/V SAN TOMAS transporting a “bunker barge” to fuel one of the many ships that call upon the Port of Houston.

“There is a need to replace those who are retiring and train additional mariners for the new equipment,” said Studdert. “Experienced captains, professionally-trained tankerman, and a training system to educate and mentor motivated mariners to transition to the wheelhouse are paramount.” 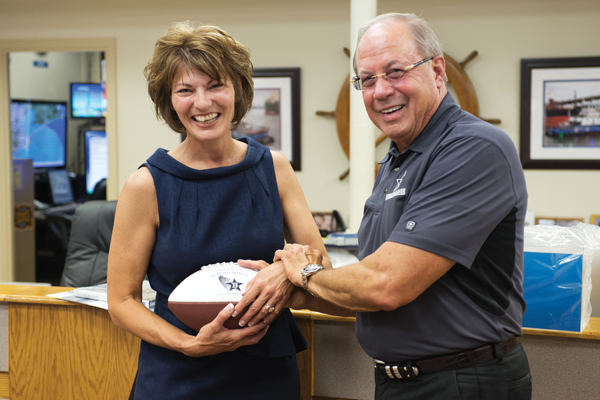 With demand comes the questions of who will come aboard for work and where will he or she receive the highly specialized mariner training that is needed. Elaine Lauzon, assistant director of personnel for G&H Towing, is always on the look out for qualified mariners to work in one of the country’s largest ports.

“We need more people for these great paying jobs,” said Lauzon. “For the size of our port, we need qualified individuals with the level of training that the government requires for these positions. To move mariners up, they need training.”

Lauzon would send employees to Louisiana for the training required for workers to keep their licenses and certifications through the U.S. Coast Guard. However, a local program is now available to save maritime companies time and money when sending their crews to train.

The San Jacinto College maritime program was established in 2010 to provide mariners with the courses required by the U.S. Coast Guard to keep their certifications, while also providing new mariners with entry-level training to acquire work. It is guided and supported by an advisory committee of industry leaders with classroom and simulator instruction by some of the nation’s most experienced professional mariners.

“A person can get his or her start in maritime here locally, thanks to this program,” said Lauzon, whose company has sent approximately 50 mariners to San Jacinto College to train in such courses as medical care provider, vessel security, proficiency in survival craft, basic safety training, and RADAR. “Once we hire someone, he or she can move up quickly by taking their courses at San Jacinto College. It benefits us because we have a more highly-skilled workforce, and it helps our employees by helping them earn more money.”

Since it began, the San Jacinto College maritime program has awarded more than 1,800 certificates for USCG-approved training to members of the maritime industry. Due to increased demand for training, San Jacinto College recently purchased 13 acres along the ship channel to construct a new facility to increase the number of simulators and courses offered.

The college has also been joined by Rear Adm. William Pickavance, who is serving as a consultant, assisting with the development of the maritime facility.  Pickavance holds more than three decades of experience as a commissioned officer with the U.S. Navy.

“The San Jacinto College maritime program is developing and expanding to support the needs of the local maritime industry and motivated women and men, who want a well-paying job, and prestigious future in a great growth industry,” said Pickavance. “It’s a win-win for everyone.”

The college has also answered industry’s call for “more well-rounded, advanced entry-level mariners” with the development of an Associate of Applied Science in Maritime Technology.

In addition to maritime technology, the college introduced an Associate of Applied Science in International Business, Maritime and Logistics, with partnerships with Texas Southern University and the University of Houston.

Students also now have the option to pursue maritime administration through an articulation agreement with Texas A&M University at Galveston, following completion of a ships and shipping course and associate degree in business administration.

The College’s Maritime Center is equipped with the latest in simulation technology.

“Up until this time, industry had only one of two choices in hiring – the recent high school graduate and the federal maritime academy graduate,” said Capt. Mitch Schacter, San Jacinto College maritime program director. “Local maritime companies have been looking for a solution to this situation for years. “With the development of these maritime programs, with input and guidance from the companies, we are producing the workforce they need.”

Last year, Buffalo Marine sent about two dozen mariners to train with San Jacinto College. Studdert said the benefit of having a local training program not only saves time and money but also enhances the overall training experience.

“You train where you work,” said Studdert. “Given the nature of our operations and the environment in which we work, Buffalo Marine crews are better equipped to deal with the Houston Ship Channel and adjacent waterways when they train in a setting that is intimately familiar with our operational needs.”