The Zen of Sushi 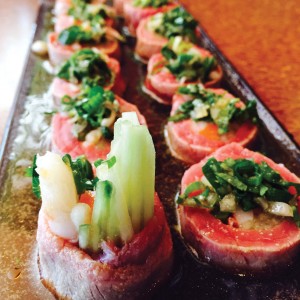 It’s hard to imagine, but not too long ago, one of the Bay Area’s premier sushi chefs didn’t know a California roll from a dinner roll.

When Michael Zhou, owner and head chef of Masa Sushi, first came to the U.S. from his native China 30 years ago he was already an accomplished sushi chef, but he faced a steep learning curve in mastering how to prepare American style sushi.

“A Japanese restaurant opened in my hometown in 1985 and I became a chef there,” Zhou recalls. “They made traditional Japanese food and didn’t even have California rolls. When I came to the U.S., I didn’t speak English and didn’t know anything about American style Japanese food. I didn’t even know how to make a California roll, so I had to learn quickly how to make all of the rolls.”

Zhou’s on-the-job training paid dividends as he progressed quickly from being a chef to part-owner of a restaurant. Zhou came to the U.S. in 1994 and went to work at a Japanese restaurant in Tampa Bay, Fla. He moved to Houston in 1995 and went on to become head chef and part owner in the popular Mikado restaurant located on Woodway. After building a reputation as one of the area’s top sushi chefs, Zhou and his partners closed Mikado and Zhou opened Masa Sushi in Clear Lake in 2004.

With the original Masa Sushi, located at 977 NASA Parkway, and the Dickinson location, which opened in 2007, Zhou continues to dazzle diners with his creativity and passion for sushi. He has earned praise for his uncanny ability to make eating sushi and sashimi, an amazing experience by blending cultures to produce food that is a “fusion” of flavors and textures. Masa—which means “graceful” or “elegant”—is unique among sushi restaurants because it intertwines traditional Japanese recipes with dashes of French culinary flourishes.

“We combine traditional Japanese sashimi with Texas style sushi, and because my wife is a French chef, we also incorporate French cooking into many items. That’s why we call ours a fusion restaurant,” Zhou says.

The French influence can be experienced in several menu offerings, including the grilled lamb chops appetizer and numerous sushi and sashimi entrees featuring baked salmon. As for the “Texas style” of sushi, Zhou says the term refers to more than just the taste of the entrée.

“With some traditional Japanese items, Americans cannot eat them because they are not used to those tastes, so we try to change the taste a little bit, but the big difference from traditional Japanese sushi and Texas style is the portion size,” Zhou says. “In Japan, the portions are very small. If you go to Japan and eat sushi, you could put the whole thing in your mouth. But our sushi is cut into very big pieces because Texas style uses big fish.

Americans like center cut meats; big pieces of steak and big pieces of fish, so we give our customers big portions and charge reasonable prices. That’s our style.”

Of course, good tasting, fresh fish is the key ingredient to making good sushi, and a family connection helps Zhou secure some of the finest tuna. His cousin owns a fish company in Honolulu, Hawaii and provides Zhou with a steady stream of yellow fin and the rarer blue fin variety.

“Yellow fin tuna is very plentiful almost everywhere, but blue fin is not. The best blue fin comes from Hawaii and isn’t sold in very many restaurants in the U.S. In Japan, people pay high dollar for blue fin tuna. My cousin keeps one for me every week,” he says.

In addition to getting fish from Hawaii, Zhou sources seafood from a variety of locations. He gets salmon, snapper, flounder and sea urchins from California. Super white tuna from Australia and eel from Korea are menu favorites, while squid, octopus and yellow tail are shipped in from Japan.

Fish sometimes weighing in excess of 100 pounds are cut up fresh each day by Zhou and his team of chefs.

While sushi is the restaurant’s calling card, one look at the Masa Sushi menu reveals just how skilled Zhou is in creating delectable sashimi. The thinly sliced fish is served in a variety of fashions ranging from traditional Japanese to Texas and fusion style.

“We create lots of our sashimi fusion style. In the traditional Japanese style, sashimi is only fish, but an attractive presentation on the plate is very important, but I create fusion style with things like our black pepper sashimi and we add our special soy and wasabi sauce as well. We also have a Texas style jalapeno yellow tail sashimi and our Costa Rica style sashimi that’s lightly seared and includes garlic and green and white onions,” he said.
Zhou has not only taken extraordinary care to produce outstanding food, but he’s also put meticulous thought into the décor of both restaurants. Both locations feature expansive bar areas that are ideal for solo diners, along with warm, intimate booths and art and lighting fixtures that combine old world Japanese themes with modern touches.

“When we opened our restaurant, we wanted it to have an atmosphere that’s warm and welcoming to everyone,” Zhou says. “We thought about every detail, including even which direction the doors face and used feng shui concepts throughout.”

Zhou says he chose to open his restaurants in the Bay Area because of the diverse population that includes many people who know what good Japanese food tastes like.

“Lots of our customers have been to Japan and know Japanese food. When I first came here, there weren’t too many sushi restaurants. Now, they’re everywhere, but we keep getting more busy because people try other restaurants and the ones that know what good sushi is always come back,” he says.

One thing Zhou hasn’t had to be concerned about is hiring new chefs. He says many of the chefs at Masa Sushi’s original location have been there since it opened and the staff of the Dickinson restaurant has remained unchanged since it opened. Such stability, Zhou says, results in unmatched consistency in food preparation and service. Likewise, Zhou’s philosophy on the key to making great sushi hasn’t changed over the years.

“You have to put your heart inside the food,” he stresses. “It doesn’t matter what kind of restaurant it is, if you want to make good food, you have to use your heart.”