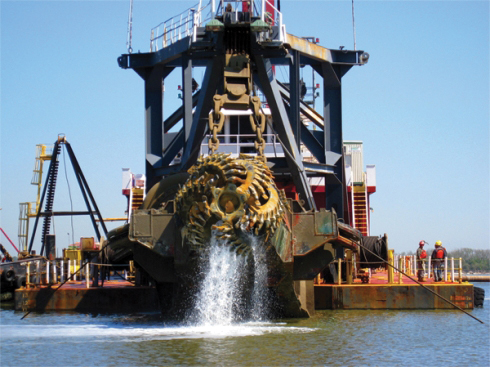 The number of issues debated in Congress is dizzying to say the least. With thousands of bills being filed and discussed, it can be difficult for local citizens to weed through the mire and learn about legislation that will immediately impact the economic development and job prospects of their region.

One such bill is the Water Resources Reform and Development Act (WRDAA), a bill aimed at ensuring that the maintenance and needed upgrades of the inland waterways system, ports, channels, locks, levees, and dams are achieved in a timely and cost efficient manner. The current inefficiencies and aging infrastructure impacts transportation, the flow of goods, and could leave communities vulnerable.

H.R. 3050 was introduced by Representative Bill Shuster (R-PA), Chairman, Committee on Transportation and Infrastructure and Representative Bob Gibbs (R-OH), Chairman, Subcommittee on Water Resources and Environment and has strong support from both Republicans and Democrats. The authors of the bill have stressed that maintaining our waterways is not a regional issue, but a national one. Nearly one-third of the nation’s Gross Domestic Product (GDP) is derived from international trade and 99 percent of the goods created, sold, imported and exported pass through a United States port. Furthermore, many do not realize that 30 million jobs in the U.S. are related to international trade.

Trade volumes are expected to double in the next decade and again in the following decade. Yet, due to deferred maintenance and a dearth of improvements, the infrastructure is already sagging under the weight of its current load. The U.S. faces slowdowns and in some cases shutdowns unless processes are streamlined, project timelines accelerated, and costs are controlled.  Rep. Gibbs recently stated, “If the river system is shutting down or there are slowdowns and stuff is not moving through like it should, there is a ripple effect through the whole economy.” In other words, everyone will bear the cost of an obsolete infrastructure in the form of slower job growth and an increase in the cost of goods. When projects are delayed due to inefficiency, it costs everyone money.

There are two types of waterways, the first, often referred to as “Brown Water,” refers to our inland waterways which has been described by the American Society of Civil Engineers as “the hidden backbone of our freight networks.” Often, it is more efficient to send crops from the heartland of America to market by barge or ship rather than deliver by truck. This system is threatened by an average of 52 service interruptions per day.

The second type of waterway is the “Deep Water” or “Blue Water” system comprised in part by ports, harbors, and some channels. Many navigation channels are filling up with sediment and debris. 97 percent of the Houston Ship Channel no longer meets its authorized depth and width, which means that cargo vessels must lighten their loads and are unable to carry to capacity. Cargo that could have been loaded into these vessels is left behind in order to reduce the draft. Consumers wind up paying at the cash register for the waste that results from inadequate dredging. H.R. 3050 proposes to change all of that. Rep. Shuster said the legislation is about international competitiveness and job creation. “It’s also about putting products on the shelf at the lowest possible price.”

So what does all this mean for our region? Maintaining and upgrading our infrastructure is critical for:

Along with these challenges come opportunities and leaders often arise. The Houston region’s congressional delegation are not only aware of these challenges, but are actively engaged in finding solutions and supporting the passage of WRRDA, along with H.R. 335 the Realize America’s Maritime Promise or RAMP Act, which ensures that future annual revenue captured by the Harbor Maintenance Trust Fund will be used to maintain the nation’s waterways.  Both these bills have bipartisan support and our congressional delegation continue to “fight the good fight.”

If you would like to support these efforts, contact your Congressional member.  If you’re not sure who it is, you can find that information and more at www.fyi.legis.state.tx.us/Home.aspx

For more information about the Water Resources Reform and Development Act, visit www.transportation.house.gov/wr