West Mansion Getting a New Lease on Life 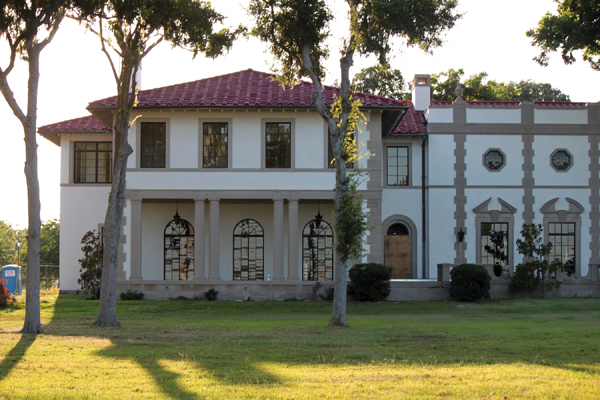 The West Mansion is beginning a new chapter in its long, elegant life overlooking Clear Lake – reportedly as a upscale retail establishment.

Owned by Hall of Fame basketball star Hakeem Olajuwon, the historic mansion on NASA Parkway has been undergoing a renovation over the past several months, giving it a fashionable new look — accented with a red roof — as it enters a new era.

Olajuwon Farms, which owns the property, applied for a building permit with the City of Pasadena to open a flagship store for a clothing line. Shortly thereafter, Olajuwon said on his website, “We are designing a new line of clothing, collaborating on a collection of leather bags and accessories and sourcing modern furniture.”

Since then, nothing. No one is allowed on the grounds of the mansion, and the website has not been updated. We will know when we know. In the meantime, it’s a secret.

The 17,000-square-foot Italian renaissance villa was built in 1930 by oil and cattle tycoon James Marion West, who came to Houston in 1905 after making his fortune in lumber, and purchased the 30,000-acre property that extended from Todville Road on Galveston Bay all the way to Ellington Field and South Houston.

Described at the time as “the most pretentious home in Harris County,” it was built at a cost of $500,000. Today the property is listed on the tax rolls at $3.4 million.

“No money will be spared to make this one of the showplaces of the country,” West said as he hired famed Houston architect Joseph S. Finger to design the 45-room summer home, according to historical accounts, which listed some of the lavish details in the plans – “marble floors, fountains, golf-leaf bathroom fixtures and door knobs and mahogany and walnut paneling made by West’s own cabinet makers in his lumber yard.

“Fifty-two box cars full of materials were used to construct the mansion, which had 16 bedrooms, 12 bathrooms and featured a sleeping porch, solarium a two-story living room and a room for a private barber. The home was built of hollow tile, stucco and steel beams with a Spanish tile roof built with handmade tiles, which has withstood almost a century of hurricanes with only minimal damage.”

The home site included a two-story cottage for a caretaker, clay tennis courts, a heated swimming pool, barns, garages and servants’ quarters and was a spectacular party location and gathering place for Houston socialites until oil was discovered on the property and the house was sold to Humble Oil for $8.5 million plus royalties.

West later purchased newspapers in Dallas and Austin before his death at age 57 while on a business trip to Kansas City. His son, James M. West Jr., was known as Silver Dollar Jim for his habit of driving around town tossing silver dollars out the window of one of his 40 Cadillacs.

For nearly a dozen years, the mansion stood vacant and a target of vandals until Humble Oil deeded it to Rice University in 1957. Part of the giant ranch then was given by Rice to NASA and became what is now the Johnson Space Center.

From 1970 until 1990, the mansion became the home of the Lunar Planetary Institute in association with NASA. But the institute found new quarters in 1990, leaving the home vacant once again until it was purchased in 1994 by the Pappas Restaurant family and put back on the market in 2003.

Again, the property sat vacant, except for an occasional charity gala held on the grounds, until Olajuwon bought the property in October 2006 for an undisclosed sum and quickly sold it to developer Opus West that wanted to turn the property into a senior living center.

That was not to be as Opus West declared bankruptcy in July 2009, and the mansion reverted back to the former Houston Rocket star.

Meanwhile, the Greater Houston Preservation Alliance placed the property on its Endangered Buildings List and was able to have it named one of Texas’ Most Endangered Historic Places in February 2007. GHPA members also found an amendment to the West Mansion deed that prevented demolition of the historic house for at least five years (July 2012).

8 Commentss to “West Mansion Getting a New Lease on Life”