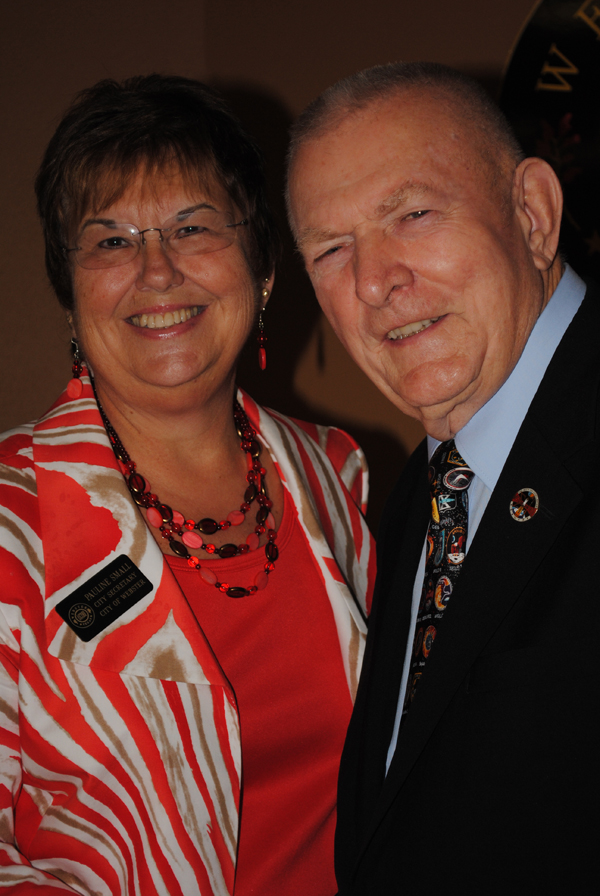 Nothing quite excites a Bay Area crowd as much as taking a journey into space – either real or imagined.

Former NASA Flight Controller Gene Kranz found that out when he addressed the Webster Business Alliance and took them along on the ill-fated Apollo 13, giving them a step-by-step description of the work in Mission Control.

You could hear a pin drop as the crowd of several hundred hung on to his every word. While some were too young to remember how America held its collective breath back in mid-April, 1970 for six days until Mission Control got the three-man crew home, many thought back and wondered how JSC did it.

Kranz told them how, describing those days of terror, and how he told his crew that “Failure is not an option.” Despite overwhelming odds, he felt that somehow they could save the three astronauts, and, of course, as we know, they did.

But, despite the fact everyone knew the outcome, you would not have known they did if you watched the crowd watch Kranz. It was just that gripping.

And, he was wearing the white vest he always wore in Mission Control.

He illustrated his talk with vintage photos of himself and others who played key roles in the mission such as Flight Controller Glynn Lunney, whose team came on duty an hour after the Apollo 13 explosion; and Chris Kraft, who was by then the Johnson Space Center director.

And, of course photos of the Apollo 13 crew. The flight was commanded by James A. Lovell with John L. “Jack” Swigert as command module pilot and Fred W. Haise as lunar module pilot. Swigert was a late replacement for the original CM pilot Ken Mattingly, who was grounded by the flight surgeon after exposure to German measles.

What is most amazing is this was back in the days of slide rules when computers were just beginning to be used.  “Most everything was done with pen and paper.” IBM was developing computers at the time, but, Kranz said, the company “did not trust us to operate these computers.”

There were other problems, too, he continued. “Back then, our rocket engineers spoke in German, and our egos were bigger than this room. But we knew we needed to work together.”

He had the entire room on the edge of their seats as he told how Mission Control realized that Apollo 13 was about to miss Earth as it returned ­– until corrections were made — and how tense things were at JSC as they worked to save the crew.

In fact, he said, “it was so intense when the spacecraft finally landed in the South Pacific, we bought 700 or the finest cigars we could find and passed them out to those who had helped save Apollo 13. That was some of the sweetest smoke any of us has ever had in our lives.”

Before and after the luncheon the former fighter pilot and father of six autographed copies of his book, Failure Is Not An Option, for Webster Mayor Floyd Myers, other city officials and the many who sat spellbound after enjoying a Chicken Marsala lunch provided by Carrabba’s  Italian Grill in Webster.

America certainly owes a debt of gratitude to Gene Kranz, Glynn Lunney and all the others who spent countless hours and with help from above got the crew safely home. Thank you from all of us who watched this drama unfold and come to a successful end.