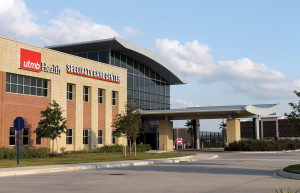 Say goodbye to part of the UTMB sign on its League City facility on the Gulf Freeway. The name has been changed to UTMB Health League City Campus, where its new addition is to open this fall.

The University of Texas Medical Branch at Galveston is changing the name of its biggest Mainland facility to UTMB Health League City Campus.

The facility, which is being expanded to add a hospital, emergency department and a wider range of inpatient and outpatient services, had previously been the Specialty Care Center at Victory Lakes.

“This renaming reflects both the changes at the facility and also acknowledges the rapid growth of League City,” said Donna S. Sollenberger, executive vice president and CEO of UTMB’s Health System.

“The name change also brings uniformity to naming that aligns with the UTMB AngletonDanbury campus.” In addition, she noted that the use of “campus” better reflects the broader scope of services that will be available.

The League City location opened to patients in May 2010, representing a major expansion of services for patients in Galveston County and southern Harris County. The original 110,000 square-foot, two-story building included advanced imaging, outpatient surgery, breast health, orthopedics and rehabilitation, pelvic health and vascular lab. The new space brought many services together under one roof using the latest technology.

With the expansion, the complex will have a hospital with 11 Labor Delivery Recovery Postpartum rooms and 10 medical/surgery rooms with plans to grow to 37 rooms. The LDRP rooms will have oversized windows, Wi-Fi, sofa beds and will offer couplet care for mother and infant in the same room and a neonatologist.

The Emergency Department will include 24-hour care and a child-friendly waiting room; eight treatment rooms, a full diagnostics lab and CT/MRI capabilities.

“We are delighted to have the opportunity to support the health care needs of the League City community,” said Dr. Danny O. Jacobs, executive vice president, Provost and Dean of the School of Medicine.

Construction of the center’s expansion is expected to be completed in August and the name change will occur over the next few months as signage is updated to reflect the new hospital and emergency department, which will be adjacent.

“What will not change is the high level of service that has characterized the center since it opened,” said Dr. David L. Callender, president of UTMB. “UTMB’s ongoing growth is possible because we have built a reputation for providing quality, patient-focused care.”