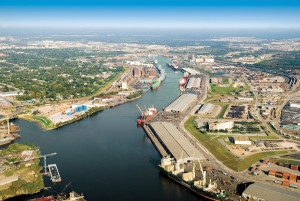 A partnership between the Port of Houston Authority, the Greater Houston Partnership and the city of Houston has resulted in Houston’s inclusion in the prestigious Global Cities Initiative economic development network.

The GCI is a five-year joint project of the Brookings Institution and JPMorgan Chase and was launched in 2012 to help business and civic leaders grow their metropolitan economies by strengthening international connections and competitiveness. The Port of Houston Authority joined with city of Houston leaders and the Greater Houston Partnership to submit the application for entry into the GCI Exchange last year. Houston becomes one of eight metro areas accepted into the Exchange’s 2015 group, the final piece in the network’s 28-metro area group.

“For the Exchange, we selected metro areas that are committed to expanding their global economic reach by working together to identify regional competitive strengths and increase exports,” said Marek Gootman, director of Strategic Partnerships and Global Initiatives at Brookings.

The goal of the network is to assist metropolitan areas as they develop plans to achieve sustainable growth, and addresses exports and foreign direct investment. Houston will start its involvement in the GCI Exchange by developing a metropolitan export plan later this year. The Brookings Institution, a non-profit public policy organization based in Washington, D.C., selected metro areas through a competitive process based upon their readiness and commitment to pursue the Exchange’s global competitiveness principles.  As the fourth largest city in the nation, Houston is expected benefit from the program through data production and research that will help to guide decisions and foster practice and policy innovations, as well as facilitating a peer learning network.

“The Global Cities Exchange provides another level of depth for our efforts to secure Houston’s long-term economic success,” said Gina Luna, chairman of JPMorgan Chase in Houston and chair of the Partnership’s Board of Directors. “This innovative public-private initiative will produce trade and investment strategies that create jobs and grow our economy through greater global engagement.”

According to a recent report, the PHA posted a banner year in 2014, with records set for both steel and container cargo.

PHA Executive Director Roger Guenther announced that the PHA’s terminals handled more than 37 million tons of cargo last year, representing an increase of five percent compared to the previous year and setting a record for tonnage.

“The unified and collective effort of all of our stakeholders is the key to what continues to make the Port of Houston a great economic engine for not only our region, but for the state of Texas and the nation,” Guenther said. “Cargo volumes continue to be strong as we begin a new year and new century for the Houston Ship Channel.”

Plans call for a significant capital investment program over the next five years that will include new and redevelopment projects totaling in excess of $1 billion. Additionally, the PHA is accommodating new alliances with container carriers, including one between the world’s two largest container lines, Maersk and MSC, which will allow for their future growth through PHA facilities.

A key Port Authority priority this year, according to Guenther, is to explore and develop an even more diverse range of cargo, including opportunities for the shipment of refrigerated goods through the port. PHA also is preparing to handle an increase in plastic resin exports that is expected during the next several years.

The Port Commission has also approved a 30-year lease agreement with the Houston Maritime Museum for property on the southwest side of the M/V Sam Houston Pavilion to serve as the site for constructing a new museum facility.

The PHA is now accepting applications for its summer intern program through the month of April.

The Port Authority’s Summer Internship Program offers graduate and undergraduate students the opportunity to work side by side with knowledgeable and experienced experts in their field. Interns can expect to be challenged by hands-on work assignments related to their major, and develop skills that will help them in almost any career.

During the 10- to 12-week summer experience, interns will have a variety of opportunities to interact with senior management, as well as with other interns, to broaden their understanding of agency operations. Interns receive an hourly compensation that is reviewed and adjusted annually, to ensure that it remains competitive and continues to attract and retain quality candidates.

The program provides an outstanding educational and work experience for a select group of candidates in a wide range of disciplines, including communications and community relations, construction management, engineering, government affairs, human resources, trade development, maritime transportation and many more.

The intern program welcomes applications from current graduate and undergraduate students in a variety of majors, such as accounting, architecture, business administration, computer science, construction management, economics and engineering. To qualify, candidates must be currently enrolled in a two- or four-year college or university or a recent graduate of a four-year college with plans to earn a master’s or higher degree in the work area of the internship.

A resume and a letter of recommendation from an advisor or professor/teacher is required for all applicants, and all applications must be submitted via the on-line application system. Visit  Portofhouston.com for program details.

Posted on Sunday, March 1st, 2015 at 7:46 am | Category Business, News | Tags: A partnership between the Port of Houston Authority, the Greater Houston Partnership and the city of Houston has resulted in Houston’s inclusion in the prestigious Global Cities Initiative economic development network.| Comment |