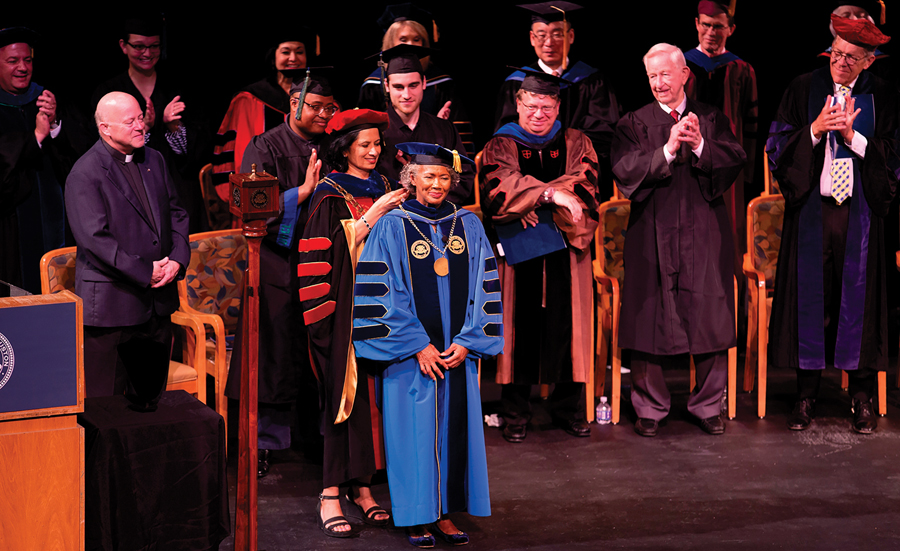 University of Houston System Chancellor Renu Khator presents the presidential medallion to University of Houston-Clear Lake President Ira K. Blake during the university’s investiture ceremony – an event that marks the official moment when the torch is symbolically passed to a new leader. UH-Clear Lake faculty, staff and students joined other UH System administrators, regents and city leaders on stage. The medallion was worn by UH-Clear Lake’s first chancellor, Alfred R. Neumann, 44 years ago.

University of Houston-Clear Lake President Ira K. Blake celebrated her formal investiture Sept. 20 as the university’s fifth president. As the first woman and African-American president at the university, she said she is living proof of the American Dream.

“I am the daughter of cotton sharecroppers with elementary school educations, who believed that, despite their own lived hardships, this nation could provide opportunity for better outcomes for their children,” she told students, faculty, staff, UH System regents and other honored guests – including her mother and eponym, Ira Kincade.

She said her parents valued “the promise of education, and encouraged all of us children to go as far as our potential and interests would take us – believing simply that education is the key to a better future.”

For the trust and encouragement from all those who invested in her, she is impelled to do the same for others, she said. She shared advice she often heard from her late husband, Vaughn Richard Downey Blake, Sr., “who reminded me that I had a responsibility to help change the lives of regular, everyday people in order to make the world a better place for everyone. In essence, I also had a responsibility – to – the American Dream.”

A university investiture traditionally takes place within the first year of a new president’s appointment. It formally marks the transference of authority and symbols of the office to the new president.  The investiture capped a week of UHCL events surrounding the ceremony. The cities of Houston and Pearland declared Sept. 20 “Ira K. Blake Day,” commemorated in mayoral proclamations. U.S. Rep. Pete Olson and State Reps. Greg Bonnen and Dennis Paul sent their congratulatory greetings. Olson’s greeting included a congressional resolution. Kemah Mayor Carl Joiner was among the guests.

Pearland Mayor Tom Reid spoke in behalf of invited government representatives, and cited his city’s partnership with the university in opening UHCL Pearland Campus and its past president. But, as Reid said referencing President Blake after the past president’s retirement, “we were so, so fortunate to gain a rock star. She is something very special.”

“I knew she would fly high and fast as your new president,” said Bloomsburg University President Emeritus David L. Soltz. “She has studied and learned so much about the university and community, and the many challenges and opportunities that face UH-Clear Lake and all of public higher education.”

UH System Chancellor Renu Khator congratulated President Blake on the accomplishments of her first year, “made possible because of her leadership, but most definitely because of your support. Yours. Yes. Faculty, students, staff, alumni and community partners. It takes a village.”