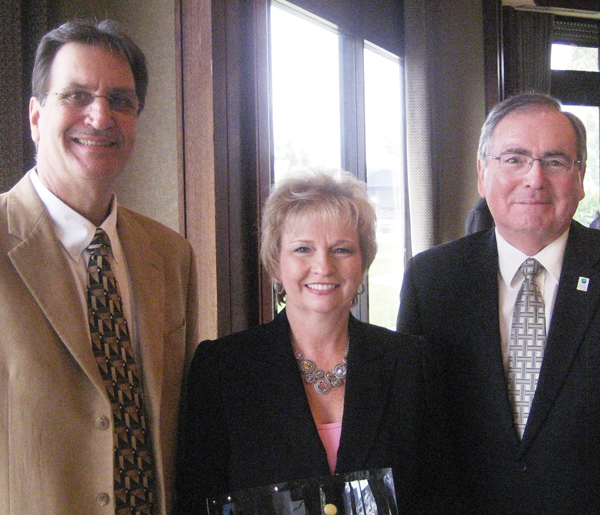 It was a time for both looking back and peering into the future when UH-Clear Lake hosted its 2013 Report to the Community Breakfast at Lakewood Yacht Club.

Besides updating the audience on achievements of the past year and its future goals, the university honored the Clear Lake Area Chamber as its Community Partner of the Year.

Topping the university’s agenda for the next few months will be preparations for the transition from an upper-level to a four-year university, UHCL President Bill Staples told the crowd of community leaders, adding that with the goal of admitting freshmen and sophomores for the Fall 2014 semester, the application process will begin this fall.

“During the past year, we have had a steering committee plus six special purpose committees doing extensive planning in key areas including curriculum, enrollment management, student services, learning resources, facilities and financial resources,” he said.

“Our legislative agenda for the current 2013 legislative session includes (1) an increase in formula funding, (2) start-up funding for our Four Year Initiative, and (3) Tuition Revenue Bonds for new facilities with our top priority being a Science and Academic Support Building.”

Noting that the transition “will be the second most significant development in UHCL’s history—second only to the opening of UHCL in Fall 1974,” Dr. Staples said the university owed many of its successes to partnerships it has developed with corporations, individuals, alumni, cities, foundations and its own employees.

“The University of Houston-Clear Lake has positioned itself as a partnership-oriented and community-minded university.  This is a role for UHCL that we take very seriously.  One of the many ways we implement this philosophy is to recognize our community partners with the UHCL Community Partnership Award which was first awarded in 2001.

“This year we are very pleased to present the UHCL Community Partnership Award for 2013 to an organization that has made significant contributions to the success of both UHCL and our entire community . . . the Clear Lake Area Chamber,” which just recently celebrated its 50th anniversary.

The chamber’s support of UHCL’s efforts to get legislation passed in the 2011 session of the Texas Legislature for its transition from an upper-level to a four-year university was very important and impactful and the end result was the passage of Senate Bill 324, he pointed out as hr presented the award to Chamber President Cindy Harreld and Chairman Mike Furin.

“We are so fortunate to have a university the caliber of University of Houston-Clear Lake in our area –which makes us the envy of many communities across the state and nation,” Harreld responded.

“Our chamber’s vision is to have a dynamic business organization providing leadership and service to a prosperous and vibrant community. A major component to a prosperous and vibrant community is the ability to offer quality education.  I’ve heard Dr. Staples say on many occasions that educated communities succeed, and having the University of Houston-Clear Lake connected with our business community adds to the economic dimension and diversification helping us achieve our vision for the Clear Lake Bay Area Houston region.”