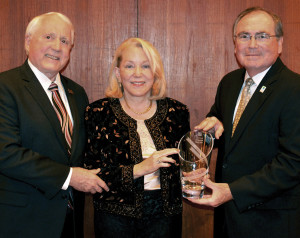 “Your support of UHCL makes a real difference in the success of UHCL,” said Associate Vice President for University Advancement Rhonda Thompson.

Thompson, who joined UHCL in summer 2014, welcomed attendees to the dinner program, with Staples also offering thanks to the guests. He then updated the group on university activities during the past year before inviting others to the lectern to speak.“This has been a very historic academic year for us,” said Staples. “We welcomed 8,665 students including our first freshman and sophomore students.”

“When I think about the Wilsons,” said Staples. “Two things come to mind: (1) They are highly devoted to education; and (2) Their dedication and service is remarkable.” 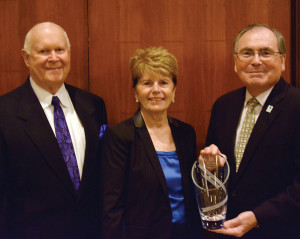 In addition to their extensive volunteer service throughout the community, the Wilsons have been staunch supporters of UHCL students through the creation of the Dr. Patricia Potter Wilson School of Education Outstanding Students Scholarship Endowment and through contributions to many other scholarship programs. They were previously honored for their support with the 2009 President’s Cabinet Philanthropy Award.

In 2014, the Wilsons showed their patriotic spirit by supporting UHCL’s Liberty Bell project, which led to Pat being named a “Belle of the Bell” and Wendell being recognized as a “Man of Honor.” Later that year, UHCL’s Office of Veteran Services honored Wendell’s time in the U.S. Air Force by renaming the department the Capt. Wendell M. Wilson Office of Veteran Services.

Over the last two years, the Wilsons graciously began funding the development of park space on campus that was commonly known as the Duck Pond. The space will be enhanced and UHCL will celebrate the Wilsons’ contributions that have been used to create a new garden and more. The Pat and Wendell Wilson Park will be introduced to the community later this year.

At the dinner, UHCL education student Nam Dinh thanked the Wilsons for their scholarship.

“It is an honor to speak here tonight,” said Dinh. “I’m in the second phase of my internship, and this scholarship made a difference to me. I want to thank you from the bottom of my heart.”

“What happens is that we hold on to you for life,” said Pat Wilson to Dinh referring to the recipients of the Wilson scholarship. “We are so excited about what is happening at UHCL, and it has been a pleasure working with everyone in University Advancement who has helped us from the beginning.”

“Pat and I are really pleased to be a part of this vibrant community,” Wendell Wilson added. “We are pleased about the garden, which will highlight an already existing beautiful area. We are also pleased to have a fountain that will help with the pond. The legacy gift keeps funding the garden for future generations.”

“Just as we presented the Leadership Award to Team Wilson, we are presenting the Philanthropy Award to Team Mossman,” said Staples. “It’s a team effort and has been throughout their lives.”

“What the Mossmans have done at UHCL is create the Dr. Sandra Mossman Endowed Professorship in Educational Leadership, which will provide a professor selected by the university with support for travel, research, outreach and more.”

Superintendent of schools for CCISD 2003-2008, Sandra Mossman worked in several positions before becoming superintendent including as a counselor, principal, associate superintendent and deputy superintendent. Gary Mossman refined his engineering skills by beginning his career as president and co-founder of Southwest Specialty Chemical Co. and retiring as president of Dixie Chemical Co. He currently serves as chief operating officer and director of PLxPharma.

Mossmans for their kind gift in creating the professorship.”

“We have had the pleasure of living here for almost 40 years and watching UHCL grow,” said Gary Mossman.

“We’ve also had the pleasure of watching as Dr. Staples’ vision has come true,” added Sandra Mossman, who also mentioned several of the partnerships between the university and CCISD. “UHCL is quite a university and unlike any other,” she added. “We salute the university. Go Hawks!”