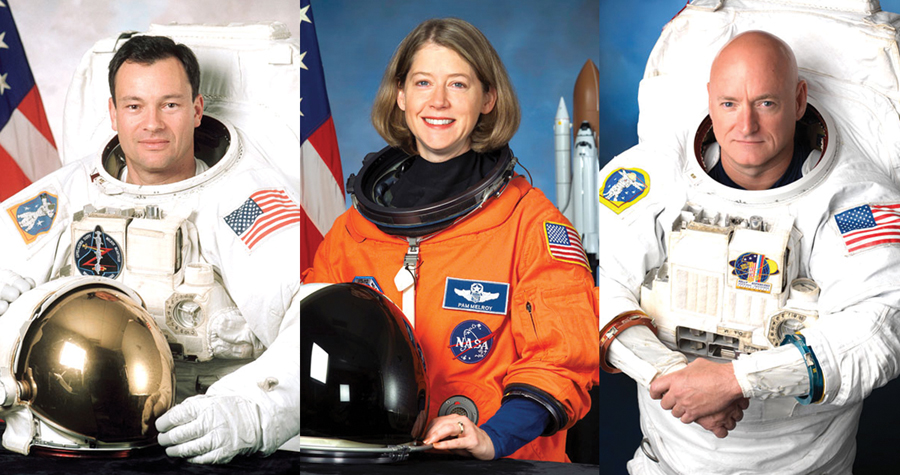 A record-setting spacewalker, one of only two women who commanded the space shuttle and the American who logged the longest U.S. spaceflight to date will be inducted into the Astronaut Hall of Fame this spring.

Michael Lopez-Alegria, Pamela Melroy and Scott Kelly, who between them flew on 10 missions to the Hubble Space Telescope and International Space Station, will be honored for their careers as veteran NASA astronauts. Their enshrinement, at a public ceremony to be held at Kennedy Space Center Visitor Complex in Florida on May 16, will raise the Astronaut Hall of Fame’s ranks to 102 members out of the almost 350 men and women who have been part of NASA’s corps since 1959.

“As we enter the year 2020, we are particularly excited to welcome these accomplished astronauts into the United States Astronaut Hall of Fame,” Curt Brown, a 2013 inductee and the board chairman of the Astronaut Scholarship Foundation, which oversees the selection process, said in a statement. “They exemplify bravery, dedication and passion and their hard work has paved the way for what promises to be an unprecedented new decade of space exploration and interplanetary travel.”

Reacting to their selection, Lopez-Alegria, Melroy and Kelly each said they were honored in interviews conducted individually with collectSPACE.com. “I really had no idea what the odds were, but I am very, very proud of having been picked,” said Lopez-Alegria. “I am humbled that my peers and the distinguished people who made this decision were even considering me,” Melroy said. “I am also very excited, it is going to be a wonderful thing.” “It is an honor,” said Kelly. “It is a career that I put 20 years of my life into, so it is great to be recognized and appreciated.”

Chosen to be astronauts as members of consecutive NASA classes in 1992, 1994 and 1996 respectively, Lopez-Alegria, Melroy and Kelly had overlapping careers.

Michael Lopez-Alegria
Michael Lopez-Alegria flew four times to space, logging more than 257 days off the planet. A retired U.S. Navy captain, naval aviator and one-time aquanaut as a member of a NASA NEEMO mission aboard the Aquarius undersea laboratory in 2001, Lopez-Alegria helped to assemble the International Space Station on shuttle missions STS-73 in 1995, STS-92 in 2000 and STS-113 in 2002.

Lopez-Alegria then commanded Expedition 14, the space station’s 14th resident crew, from September 2006 through April 2007, during which he set records while working outside the orbiting laboratory. He retains the title as the American with the most cumulative time on spacewalks at 67 hours and 40 minutes, and is tied with former NASA astronaut Peggy Whitson for the most extravehicular activities (EVAs) by an American at ten.

Beyond his spacewalking feats, Lopez-Alegria said his personal history also sets his astronaut experience apart from many others.
“If you look at my 23andMe [DNA profile], I am not American in any way, shape or form,” he said with a laugh, referring to his being born in Spain. “That might be an inspiration for kids in a similar situation.”

“It doesn’t necessarily have to do with the human factors of space, but it is spaceflight done by someone who doesn’t look or feel like everyone else,” he said.

Since leaving NASA in 2012, Lopez-Alegria has served as the president of the Commercial Spaceflight Federation and as a consultant to traditional and commercial space companies. He also is the past president of the Association of Space Explorers, an international professional and educational organization of current and former astronauts, including Melroy and Kelly.

Pamela Melroy
Pamela Melroy flew the first of her three space shuttle missions with Lopez-Alegria as a crewmate.

“She was the only rookie on the crew and she was drinking from a fire hose the whole time but never spilled a drop,” said Lopez-Alegria of his fellow inductee. “It was so amazing to watch her transform from ‘the rookie’ throughout training and even on launch day to the time we were ready to deorbit to the seasoned veteran.”

“Her metamorphosis was brilliant to watch,” he said.

“Mike has always been a fantastic friend,” Melroy told collectSPACE. “And to carry on that relationship from flying together as crewmates to now being colleagues in a different place in our careers, as well as friends, is terrific.”

A retired U.S. Air Force pilot with over 5,000 hours of flight time in over 50 different aircraft, Melroy was only the second U.S. woman to pilot and then command a space mission. (The first, Eileen Collins, was inducted into the U.S. Astronaut Hall of Fame in 2013.) Melroy was pilot on STS-92 and STS-112 in 2002, before she led the STS-120 crew in 2007. All three of her flights contributed to the assembly of the International Space Station.

“When I talk about my career as an astronaut, you have to talk about building the station. For my generation of astronauts, that was our contribution,” Melroy said.

After retiring from the astronaut office in 2009, Melroy became the acting deputy associate administrator for commercial space transportation at the Federal Aviation Administration and held positions with the Defense Advanced Research Projects Agency. She is now CEO of Melroy & Hollett Technology Partners and the director of space technology and policy at Nova Systems in Australia, as well as serves on the User Advisory Group for the National Space Council and advisory group to the Australian Space Agency.

SCOTT KELLY
Scott Kelly holds the title for the longest single space mission by a U.S. astronaut, a record that was once held by Lopez-Alegria.

“The record represents a lot of hard work by a lot of people, not just me, but also my colleagues who have spent progressively, increasingly longer lengths of time in space,” said Kelly. “I look at it as a continuation of our spaceflight experience. I expect that within the next few years, an American will have stayed in space longer than I,” he said.

A retired U.S. Navy captain, test pilot and also a NEEMO aquanaut, Kelly shares the distinction with his brother, Mark, of being the first identical twins to both become astronauts. Kelly flew four times to space, including serving as pilot on the third mission to service the Hubble Space Telescope, STS-103 in 1999. His next flights were to the International Space Station, including a 12-day shuttle mission, STS-118 in 2007, and five-month stay, Expedition 25/26, in 2011.

Kelly’s fourth flight marked the first “one-year” mission on board the International Space Station, 340 days long, bringing his total time in space to over 520 days.

“I got to do some incredible things and I feel like I’ve been very privileged with the opportunities I had at NASA,” he said.

Since leaving the U.S. space agency in 2016, Kelly was appointed United Nations Champion for Space and has become a best-selling author.

Following their induction ceremony, which will take place under the display of the retired space shuttle Atlantis at the Kennedy Space Center Visitor Complex, Lopez-Alegria, Melroy and Kelly will be celebrated at a black-tie gala hosted by the Astronaut Scholarship Foundation.

Lopez-Alegria, Melroy and Kelly were selected for enshrinement by a panel of Astronaut Hall of Fame members, flight controllers, historians and journalists. To be eligible, astronauts need to be U.S. citizens trained by NASA who first orbited Earth at least 17 years prior to their induction.

Founded in 1990 on the suggestion of the then-surviving Mercury astronauts, the U.S. Astronaut Hall of Fame is a featured part of Heroes & Legends, an attraction at the Kennedy Space Center Visitor Complex.