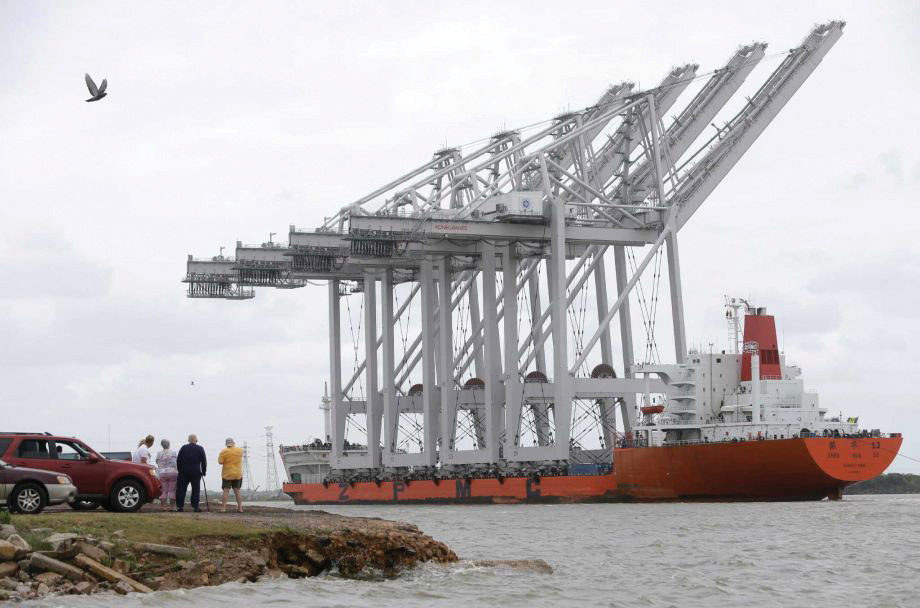 Massive Port cranes are scheduled to go into service this summer

After a 73-day ocean journey and an arduous off-loading process at the Barbours Cut Terminal, the four new Super Post-Panamax cranes that arrived at the port on May 5 will go into operation later this summer.

The electric cranes, manufactured by Konecranes and built in the tiny South Korean town of Mokpo, represent a huge upgrade over the existing cranes and will allow the Port of Houston to service the larger vessels that will begin calling on the port after the project to expand the locks at the Panama Canal, which began in 2007, is completed. That project is scheduled to be complete in the first quarter of 2016, according to Paulo Soares, the Port of Houston Authority’s managing director of operations.

“The cranes are not in service yet, as we have not completed the off-loading process,” Soares said. “It’s going to take until the latter part of July and into August before they are ready to go into operation. We have quite a few things to do with the cranes before they’re ready to go to work.”

The $50 million contract for the 30-story cranes was approved by the Port Authority in 2013 and is part of a larger $700 million renovation of the Barbours Cut and Bayport terminals. The new arrivals will greatly increase the cargo handling capability at the terminal.

By the way, one long ton is approximately equal to 2,240 pounds. At 1,505 tons, the new cranes are more than twice as heavy as the old ones (635 tons each), and at 289 feet tall and with a lift height of 204 feet, they are the largest cranes ever built by Konecranes. They will be able to lift and lower a loaded container in about twice the speed—approximately 295 feet per minute—as the current cranes.

“As part of a significant upgrade of our Barbours Cut Container Terminal, these new Super Post-Panamax cranes will accommodate the significantly larger vessels that will be calling on our container terminals after the expansion of the Panama Canal,” Port Commission Chairman Janiece Longoria said in a statement. “International trade, primarily containerized cargo, continues to expand rapidly at our facilities. More trade means more jobs and economic activity for our region and state in support of our mission.”

Soares said only one of the existing cranes at Barbours Cut will be demolished and it went into service in 1975. By way of comparison, it has a capacity of 37 long tons and a height above the deck of 80 feet, while the new cranes measure 144 feet above the dock.

Getting the cranes here from South Korea and off-loading them from the massive cargo ship that brought them were both engineering feats of the highest order. The trip began on Feb. 23 from Mokpo, located on the southern tip of the Korean peninsula.

“The cranes were transported fully erected by a Chinese company called ZPNC on a vessel called the Zhen Zhn Hua #13,” Soares said.

Soares said the process of getting the cranes off the vessel and onto the dock took about 10 to 12 hours for each crane. He says the ship had to position itself alongside the dock so crews could cut off all of the extensive sea fasteners, bracings and lashings that were required to keep the cranes in place during the ocean voyage. With the fasteners removed, the ship then had to be aligned with a set of temporary rails on the dock, then hydraulic cylinders were used to push the cranes off the vessel and eventually onto the permanent rails on the dock.

“It took about four hours just to get the first portion of the process—getting the cranes off-loaded and onto the temporary rails—completed before we could move on to putting them on the permanent rails,” Soares said.

Training on the new cranes for workers at Barbours Cut was included in the contract, Soares said, and the manufacturer will provide electrical and mechanical training. Additionally, representatives from Konecranes will be present when the cranes go into service.

“Before they go into service, they must pass what’s called endurance testing. Once they pass that, we take possession of the cranes,” Soares said.

The crane operators will test the cranes by using test weights before the Ok is given to put them into service. Once they are operational, they can be operated by just one person as the current cranes are.

Meanwhile, dredging continues on pace at both the Barbours Cut and Bayport container terminals. The work was needed in order to handle the larger vessels that will be passing through the Panama Canal’s wider locks. Officials say the dredging projects are scheduled to be completed this year as well.

Container Business Buzzing
Through the first quarter of 2015, loaded container units handled at the Barbours Cut and Bayport container terminals increased by 24 percent over 2014. According to Port Commissioner Roger Guenther, import steel continues to outpace projections and is up by more than 66 percent for the year.

Contract Awarded
Port commissioners recently awarded a professional services contract to TCB/GBA Joint Venture for professional engineering and planning services to support the U.S. Army Corps of Engineers’ feasibility study. The Corps is studying modifications that could improve the Houston Ship Channel system, including the Barbours Cut and Bayport terminals. The $3 million contract covers a minimum three-year study period and the Port of Houston is one of just three ports in the nation selected for the congressional study.