The Admiral’s Log – The Three Trout on the Third Coast 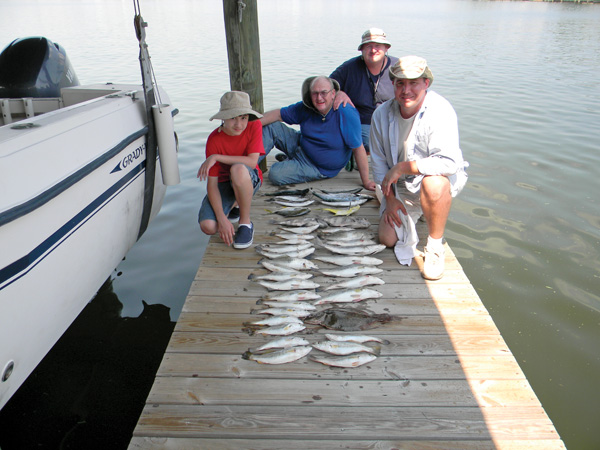 Reverend Mike Kent of San Antonio and his family with a catch of Gulf Trout, along with a few other inshore species.

Trout are probably the most popular fish sought after in the Galveston Bay Complex and for good reason.  They offer a good fight as well as excellent table fare. Now, which of the three fish called trout are we talking about?  Actually, we are describing all three.

Speckled trout or spotted sea trout, as they are officially called, are the most popular of the three fish.  Why? Mainly because of their overall larger size and the fact that a speckled trout is a game fish, while its cousins, the silver sea trout and sand trout, are considered pan fish.  At the table, when freshly cooked, hardly anyone can tell the difference in taste.

There are no bag and size limits on silver sea trout and sand trout, while their cousin has a bag limit of 10 per day and a slot limit of 15 to 25 inches.  Yes, one speck over 25 inches may be retained.

When I first started fishing, anglers recognized only two trout in Texas waters.  As far as fishermen were concerned, there were the speckled trout and the speck’s less regal cousin, the sand trout.  Marine biologists, however, were persistent enough to finally get Texas and other Gulf Coast Fishermen to accept the fact that the so-called sand trout could be either of two species, silver sea trout or sand trout.

Early on, Gulf coast anglers eventually adopted the name Gulf trout for the other specie and some say that party boat operators were responsible for the name as Gulf trout sounds more sophisticated than silver sea trout.  Others say that the name came from sports fishermen who found so many in the offshore Gulf of Mexico.

Today, most coastal fishermen use the names sand trout and Gulf trout interchangeably, with one or the other referring to both species.

Now, for the hard part for most fishermen and that is identifying which of the two fish you have caught.  Even when both are caught on the same trip it is often difficult for the average angler to distinguish between the two.

The dark spots on the upper body, fins and tail immediately set the speckled trout apart from the Gulf and sand trout.  An easy distinction does not exist for laymen to separate the other two.

The Gulf trout is noted as the heavier of the two species. When looking at the State of Texas Fish Records, the record Gulf trout weighed 6.91 pounds and 6.25 pounds for the sand trout.

Other distinguishing factors include a more rounded tail for the Gulf trout while the sand trout has a square tail. A couple of canine teeth in the front of the top jaw of the Gulf trout also set it apart.  The mouths of large female Gulf trout are yellowish-orange and the sides are bright silver.

Both fish are common in the bays during the warm months while sand trout tend to gather along the beachfront and jetties during cold weather and Gulf trout find refuge around structure farther offshore at the same time.

Gulf trout and sand trout are much easier to catch than specks and are as easily taken on dead bait as live.

Wintertime is one of the better times to catch both species.  Sand trout especially will be hovering around deep holes close to the passes and often Gulf trout are mixed in with them.

Now, the next time you land one or the other hopefully you will be able to identify what you have.  Whichever you catch, enjoy a good, tasty meal from it.