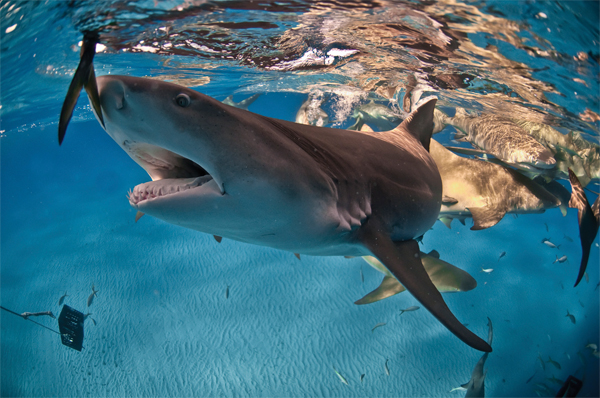 While we do not want to lead you to believe that this aggressive fish is harmless, we do want to emphasize that respect and common sense are the keys to enjoying their surroundings with them.

Following the 1970’s movie “Jaws”, recreational shark fishing took off.  Shark tournaments became popular and the goal of many visitors to the Galveston Bay Complex was to catch a shark, especially a big one.

Today, I get many e-mails and calls from vacationers to our area asking about where to fish for sharks, how to fish for them and what baits to use.  So, if you are interested in hooking up with one of the feared creatures of the sea, let’s take a look at some pointers on where to go, when and how to fish for them.

Sharks of all sizes roam the Galveston Bay Complex and small sand sharks and bonnet heads are common all over Galveston Bay.  Most of the small sharks are caught by anglers targeting other fish such as reds and trout and are considered a nuisance.

If your goal is a large shark, one four feet long or larger, then several tips can increase your odds of accomplishing that objective.

While large sharks are caught in the bays, the odds increase significantly as you get closer to the Gulf.

Several areas are known for producing large bull sharks, blacktips, sharpnose and others.  The passes into the Gulf are full of sharks during the warm months.  April through November, the channel side of Bolivar’s North Jetty is one of the more popular spots.  San Luis Pass and the Gulf side of Rollover Pass are top spots as well.

Several fishing guides, who offer special shark fishing trips, say that the beachfront from Crystal Beach to San Luis Pass from close to shore up to about eight miles out is prime territory for large sharks.  Often huge sharks are landed within sight of swimmers and wade fishermen.

John Sabo, a long-time shark fisherman, told me that his favorite spot is approximately three to five miles out of San Luis Pass.  Sabo and others find that the best times to find large sharks is from dusk to dawn with the time frame from approximately three hours prior to dawn to just after sunrise being the best.

The top baits are bloody baits with large pieces of cut bonito being at the head of the list.  Stingrays are excellent for the really big sharks.  Other baits that work well are the same as those used by recreational offshore anglers targeting other pelagic fish.

Wire or coated wire leaders along with a strong hook are a must if you want to land your fish.

Sharks have to continuously be moving in order to pass oxygen into their systems. As a result sharks are caught at all depths.  Suspended baits, those drifted behind a boat with little or no weight, will attract the larger sharks.  The smaller ones tend to be caught at lower depths around structure.

According to data from the fisheries management groups, sharks are being over-fished.  Today, there are a large number of species of sharks that are prohibited to retain while those that can be kept have a stingy bag limit of one fish per person per day.

Sportsmen today are practicing CPR when it comes to sharks.  That is Catch, Photo and Release.

Before embarking on your first shark-fishing trip, it is imperative you check out the regulations.  The Texas Parks and Wildlife Department website offers a complete set under “Bag and Size Limits for Saltwater Fish.”