The Admiral’s Log – December, a Potentially Dangerous Month for Fish, Fishing and Boating 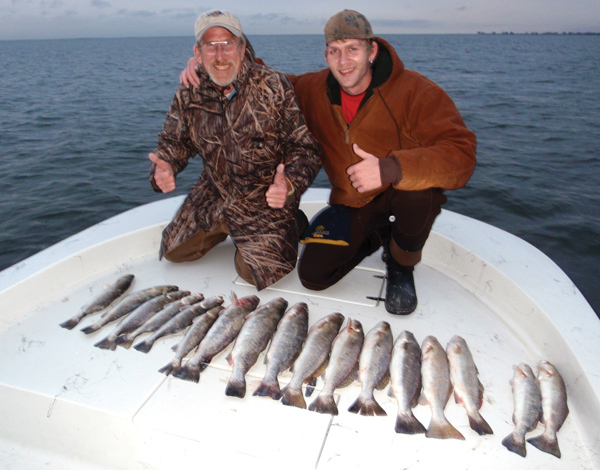 Steve and Sloan Tuttle with a fine December catch of speckled trout.

December is a month that usually begins with moderate weather and fishing continues to follow the fall patterns and is excellent. The time frame from Thanksgiving to mid-December often offers some of the best wade fishing of the year all around the Galveston Bay Complex.

It is a time when Burnett Bay and the smaller bays around Baytown offer their best fishing of the year and, barring a severe freeze, that pattern continues well into the new year.  Some of the most pleasant weather of the year falls during December and for that reason fishermen and boaters take to the waters when Christmas activities and sporting events allow.

Unfortunately, December, especially the second half of the month, often offers the coldest temperatures of the season.  Sudden and dramatic changes in the weather are commonplace and the worst events are associated with sudden freezes.

Boaters, including both fishing and recreational, often are lured into the open waters by calm conditions and before the day ends, a severe cold front has caught them off guard.  Each season, lives are lost to those conditions, as the captain waits too late to heed the warnings on the horizon.  Blasts of cold air pushed by gale force winds are common and often are too much for smaller boats to handle.

The other devastating event that takes place is major fish kills involving speckled trout and other game fish.  The big freeze event of 1983 took place just before Christmas and caught tens of thousands of speckled trout trapped in shallow water that eventually took their lives as the water temperatures dropped 20 to 30 degrees overnight.  Once water readings fall below 50 degrees, trout are in trouble.  That freeze was particularly lethal, as the fish had not had time to acclimate to the cold weather as they do later in the season. 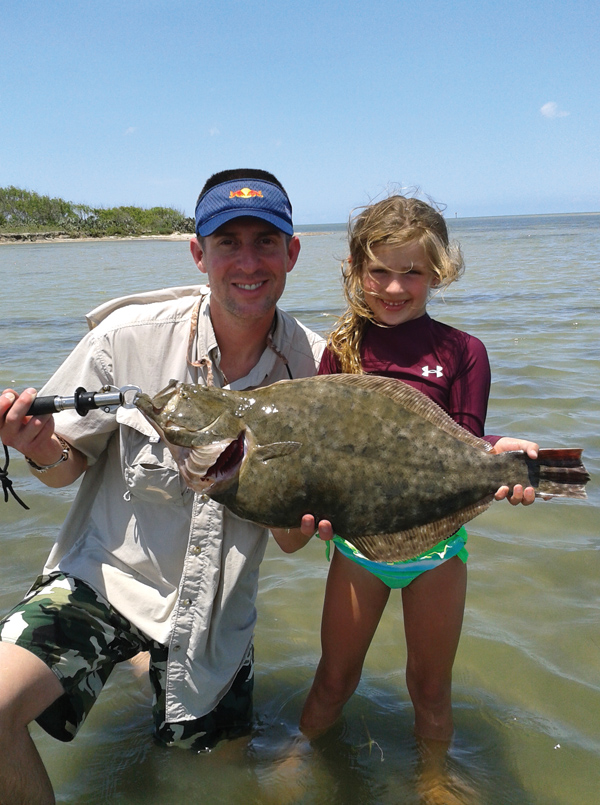 Rotarian John Nugent’s granddaughter Briley Eason recently won a $50,000 scholarship for catching the biggest flounder in the STAR tournament’s kids division. She is pictured holding the 6lb 12oz fish with her father Mike.

Each December, anglers anxiously watch the weather forecasts hoping that no major Artic Front pushes through.  The best scenario for fish is to have early cold fronts cool the water down to levels that push trout and reds to deeper water.  This occurred in December 2010 and during late December when a severe freeze hit the coast, there was limited damage to the fish stocks.

Why? Because the fish were used to the colder water and had changed their habitat from the shallow shorelines to deeper channels and other pockets of deep water.  During the day they would roam the shallower waters while returning to their refuge in the evening.

If the same cold front had arrived two to three weeks earlier, the damage would have been devastating.  Still, there were some isolated fish kills; however, nothing like what it could have been.

Not much could have been done to avoid the fish kills; however, there are many steps that can be taken to prevent the loss of human life.

During the big freeze event of 1983, several boats capsized as that system suddenly hit the Galveston Bay Complex and lives were lost trying to run across the bay to the boat ramp.

Here are a few pointers that can save your life and boat during the winter months.  First of all, carry Type 1 Life Jackets (PFD’s), as they will keep your head above water.  When water temperatures are in the 50’s, it does not take long to go into shock.  A Type 1 PFD could be the difference between surviving and not.

If you are caught in a sudden blast of high winds and are miles from your boat ramp, don’t try to cross the bay.  Instead, find the closest point where you can moor your boat and call someone to either bring your trailer to you or take you to your boat ramp.

Watch the weather forecasts before launching and the skies after launching.  While our forecasts are quite sophisticated, they still cannot pinpoint the exact time of a frontal system’s arrival.

If in doubt, don’t launch or if you are already in the water, head back.  While we may not be able to save the fish, we can save ourselves.