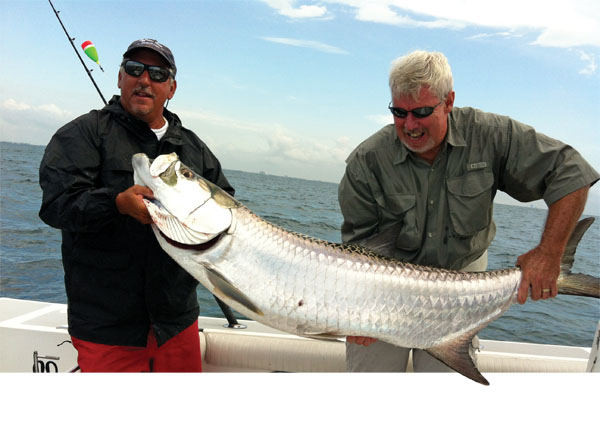 Captain Shannon LaBauve and Donny Moore proudly display a tarpon caught off the Galveston beach front. The fish was hooked up using shad under a popping cork.

September is one of the most challenging months of the year for fishermen and fishing guides.

It is a month that usually starts with a continuation of our summertime fishing patterns and, by mid to late September, the first cold front blows through.

The shorter days send a signal to fish that they should start moving, and that applies to both the offshore pelagic species and the inshore varieties.

Soon after Labor Day, king mackerel, ling and Dorado start scattering and, following the first cold (should say cool) front, the concentrations that hovered in the near-shore waters all summer begin to move south.

The hot action on trout at the jetties usually comes to a halt, as specks that spent the summer in the surf and around the rocks begin heading back into the bays.

September often is one of the best months for tarpon action; however, after a couple of frontal systems pass through, they will join the other fish heading south. From Rollover Pass to San Luis Pass, tarpon will be rolling on calm days, chasing pods of mullet and shad.

Anglers fish for tarpon within sight of the beach and usually find a variety of fish competing with the silver kings for bait.  Bull reds and sharks are the most common competitors; however, occasionally king mackerel and ling will be in the near shore waters.

The jetties and surf are usually filled with both slot reds (20 to 28 inches) and bull reds (over 28 inches).  The big reds like to spawn along the beachfront during turbulent conditions, such as those generated by storm tides and tropical events in the Gulf of Mexico.

Reds of all sizes are more active in the bays and, toward the end of September, flounder begin stirring. Although the annual flounder runs does not get well under way until mid-October, the same senses that drive other fish to move affect the flatfish the same way.

September often is frustrating to fishing guides, as the patterns, especially for trout, tend to change often.  While certain reefs and shell pads tend to be constant producers from Memorial Day until Labor Day, during September fish may be here one day and gone the next.

Still, fishing is generally good during September; it is just determining where the fish are that is the challenge.

Now, let’s take a look at where the action likely will take place.  Dividing the month in half is the best way to pinpoint where and what fish may be biting.

During the first half of the month, continue with the summertime patterns, as fish are slow to move as long as the water is warm and no tropical systems or cold fronts have hit the upper Texas Coast.

As mentioned earlier, tarpon fishing tends to be at its peak and bull reds are more numerous in the areas where tarpon roam during September.  Trout action likely will shift to the bays, especially East Bay, where deep reefs exist and Trinity Bay begins to turn on.

Offshore, kings and other pelagic fish will continue to be around, just not in the concentrations as during the middle of summer.  Productive trips likely will require more distant runs than during July and August, and this is the month sailfish start schooling in the Gulf.

The second half or latter part of the month tends to be the hardest to predict, as transitions are in full swing.  This is particularly true in the bays as fish are preparing for fall and winter.  The transition period usually lasts until sometime in early to mid October, depending on how quick the water temperature drops.

Knowing the changing habits of fish during September will give you a big edge over others in bringing back a cooler full of fish this month.