Texas Superintendent of the Year is humbled by signal state honor 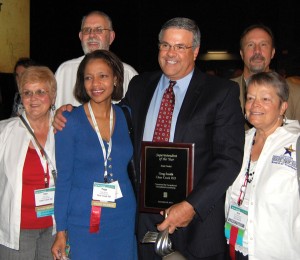 Clear Creek ISD Superintendent Dr. Greg Smith found himself the toast of the town after his selection by the Texas Association of School Boards as Texas Superintendent of the Year.

Everywhere he goes, people stop and congratulate him.

Each of the 44 schools in the district posted congratulations on the CCISD website and teachers and staff decorated CCISD headquarters in League City.

When he arrived for his Space Center Rotary meeting, his fellow Rotarians gave him a rousing standing ovation.

When he and his wife, Cathy, attended the Bay Area Houston Ballet & Theatre’s Serendipity Ball at Space Center Houston, the crowd gave him another standing ovation.

Yes, he gets a little embarrassed over it all.

Dozens and dozens of community leaders and educators gathered in Kemah to honor him at a buffet dinner and reception hosted by the Kemah Boardwalk at its Aquarium Restaurant Oct. 16, along with new TASB President Dr. Viola Garcia, who came down from Austin to present Dr. Smith with the engraved trophy naming him Texas Superintendent of the Year.

Besides CCISD Board President Ken Baliker and most of the current trustees, the crowd included immediate past Superintendent Dr. Sandra Mossman, who was 2007 Region IV Superintendent of the Year, with her husband, Gary; State Rep. Larry Taylor, former Seabrook Mayor Dr. Gary Renola, and former CCISD Trustee Ralph Parr, who regaled the crowd with humorous memories of life in CCISD. 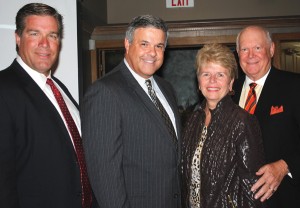 Retired Clear Creek ISD Superintendent Sandra Mossman and her husband, Gary, right, congratulate Superintendent Greg Smith, second from left, as they arrive at reception hosted by the Kemah Boardwalk at The Aquarium restaurant to honor Dr. Smith. CCISD Board President Ken Baliker is looking on at left.

“I am honored to have been selected as Superintendent of the Year and humble enough to know that it could not have happened without having a great team made up of trustees, cabinet members, staff, parents but most of all, great students!” Smith said of the signal honor.

Baliker was equally happy to hear the news. After all, it was the school board trustees who nominated him for the honor.

“The CCISD Board was delighted to hear the announcement honoring Dr. Greg Smith as Texas 2012 Superintendent of the Year. He is in elite company.

”Greg has been a model of courageous leadership in lean times facing public education, and we look to him to continue to provide instructional, financial and administrative leadership locally and through CCISD’s membership in the Texas High Performance Schools Consortium.

“Greg’s leadership style epitomizes the first “C” in CCISD, for Courage, as he has had the helm during a difficult fiscal period for public education and made decisions among competing priorities that keep kids’ education first.  We are blessed that Dr. Smith calls CCISD home.”

Smith, CCISD superintendent for the past four years, serves nearly 40,000 students and has 27 years of administrative experience. He earned a bachelor’s degree at Oakland University, master’s degree at the University of Houston-Clear Lake, and doctorate at Texas A&M University at College Station.

Candidates are chosen for their dedication to improving educational quality, board/superintendent relations, student achievement, and commitment to public support and involvement in education.

The state selection committee, which interviewed regional winners in Austin, focused on such issues as the demands for America’s workforce, public education funding and the pending school finance lawsuit, successful board relationships, technology integration, and academic excellence.

The selection committee noted that student success in the district could be credited in large part to Smith’s attention to changing demographics and also noted that he faced recent funding issues by attacking the budget with a scalpel instead of a machete.

His efforts to host job fairs, keep children of laid-off NASA employees enrolled, and, after Hurricane Ike get school back in session in two weeks were also cited. 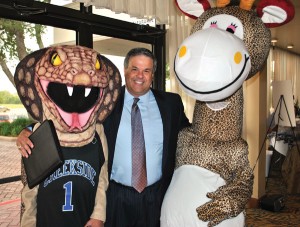 Shortly after joining CCISD, Smith rallied the entire community to create a vision for the children of Clear Creek ISD.  While employee and parental involvement are naturally part of any strategic planning process, Smith made this more than a ceremonial procedure.  He became the listener and the learner, allowing the aspirations of the school board, teachers, principals, parents and students help craft a five-year strategic plan.

The plan has fueled his every decision and discussion for the past four years and has resulted in an increase in student performance. In June, more than 97 percent of CCISD students graduated with plans to attend college, join the workforce or enlist in the military.

Smith was nominated for the award by the Clear Creek School Board for his student-centered leadership, Ballard said.

Superintendents from any of the state’s 1,034 school districts are eligible for nomination by their local boards of trustees. District nominees are submitted to a regional selection committee, which submits one nominee per region to the state selection committee. Smith received the award and a Superintendent of the Year ring from Balfour, program underwriter. State finalists also received an award from Balfour.

TASB is a nonprofit association established in 1949 to serve local public school districts. School board members are the largest group of publicly elected officials in the state. The districts they represent serve more than 4.9 million students.