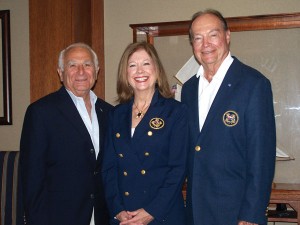 An organizational meeting was held June 30 at Lakewood with 39 admirals and members attending. Past Commodore and Admiral Don Genitempo was elected fleet admiral and Admiral Marsha Taylor was elected executive officer.  The admirals attending were designated “Plank Owners,” a term used to designate the first crew when a U.S. Navy ship is commissioned.  These admirals are entitled to wear the Texas Navy Lone Star Medal.

On Saturday, September 22, a total of 22 admirals and wives will be visiting the Sam Houston Squadron at Lakewood Yacht Club for dinner.  These admirals are from the Nimetz Squadron in Dallas and the Jeremiah Brown Squadron in Fort Worth.  All social functions of the squadron will be open to Lakewood members and their guests.

“We plan to have an installation of officers ceremony on the evening of Friday, October 5,” explained Past Commodore Jack Thomas, who instigated the formation of the squadron. State Rep. John Davis will perform the installation ceremony. All Texas Navy personnel throughout the state of Texas will be invited to this ceremony.