Texas Meditations – The Truth About Texans 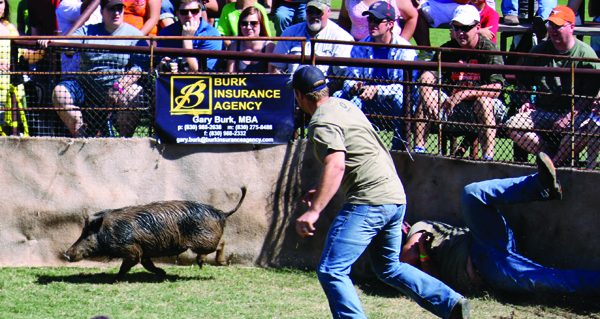 I had to call my best friend Kevin to tell him about my weekend at the Sabinal Wild Hog Festival.  It was a huge party for such a small town.  They had over 30 food booths, an equal number of craft booths and a circus carnival for the young ones that featured bungee trampolines, a train, ponies and countless other things.  But the most impressive thing to me was the fact that the number of people attending was many times the population of the entire town.

The highlight of the festival was the wild hog bagging competition.  In a ring about 75 feet in diameter, two people sat on a table in the center while a hog was let in.   Once the doors closed on the chute behind the hog, the competition was on.  At the sound of a whistle, the clock would start and the two people would chase after the hog until one of them caught it.  Once the hog was caught and controlled, one member of the team would race back to the table to pick up a large burlap sack.  The goal was then to stuff the hog into the sack and drag the bag, with the hog inside, across a line.  The team that does it in the shortest amount of time wins.

There were definitely team loyalties.  Many in the crowd wore t-shirts bearing the name of the hog catching school they attended (Yes, they take it so seriously they have schools for it).

As you might imagine, there was plenty of blood, sweat and tears, both porcine and human.  Some teams took well over a minute to get the job done.  In several contests, the hog won as time expired before he could be caught.  But there were also the great performances—the best times often in the 17-second range.

And there were a few surprises.  In the open category (mostly adult male teams) the hogs were the largest and most athletic.  Grown men were sometimes helped off the field, bloody and beaten.  Some were embarrassed by their lack of ability to even catch the hogs.  Others were able to make the catch but then struggled in vain trying to stuff the massive animal into the sack.  But two 15-year-old girls made it look easy as they took down the hog like linebackers on a scrambling quarterback, stuffed him into the bag and dragged him across the line—in 15 seconds.  Needless to say, there were lots of embarrassed adult men.

It was such a hoot, I had to tell Kevin about it.  We had talked once about doing the Running of the Bulls in Pamplona but he opted out saying he was sure that if I was determined to achieve death by livestock we could find a bull to aggravate a lot closer to home.  I knew he’d appreciate this.

He contemplated my news and after his usual moment of silence he replied, “You Texas boys sure have a strange notion of what is fun.”

Although he lives in Indiana, Kevin spends a lot of time in Texas and he loves it here.  But there are still many things about us Texans, especially the rabid, recently arrived Texans that he just doesn’t get.  Most of it surrounds our way of thinking.  After giving it some thought, I have come to the conclusion that he is probably right about us.  We are indeed, strange.  For example:

On that hot spring day in Sabinal, more than 1,200 people sat in the bleachers watching the competition.  But no matter who was in the ring, everyone cheered.  We were rooting for whoever was brave enough to get in there and get muddy and bloody.  We were all there for each other—and we all had a ball.

Yes, Texans do have some strange notions of what is fun.  And that suits me just fine!

2 Commentss to “Texas Meditations – The Truth About Texans”