Texas Meditations – What Are We Thinking? 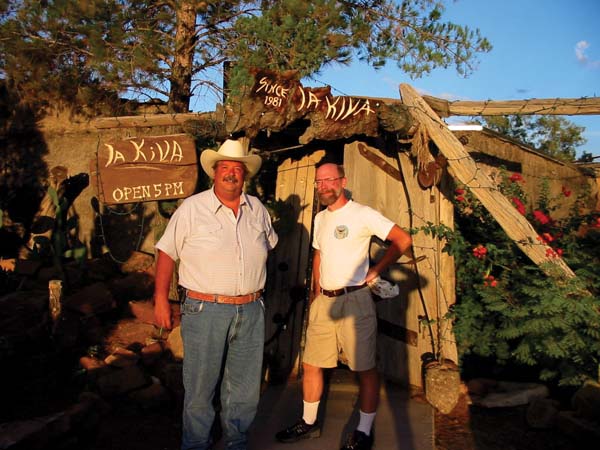 The author and his running buddy Kevin Johnston at La Kiva

I’m a real fan of the Texas singer/songwriters.

I count Robert Earl Keen, Gary P. Nunn and Laird Considine among my favorites.  I first heard the Considine CD Ghost Tones in 2003 over the sound system of my favorite Big Bend area bar, La Kiva in Study (pronounced “stoo-dee”) Butte.  I immediately set out to find a copy of the CD. It took two days and a drive to Alpine, but I didn’t leave the area till I found it.  Today it remains one of the few CDs that never leave my Jeep.

When I first moved to Texas 20 years ago, a number of people told me clearly—forcefully even—that you haven’t been to Texas until you’ve been to Big Bend and Luckenbach.  I immediately set out to see both and have been returning regularly ever since.   And I never make a visit to Big Bend without a trip to La Kiva.

Like Big Bend itself, La Kiva is a one-of-a-kind experience.  Mostly underground, built into the side of Terlingua Creek, this bar is unlike anything you’ve ever seen.  I won’t try to describe it because if I did, you wouldn’t believe me anyway.

A typical trip to Big Bend finds me spending an afternoon on the Terlingua porch (a cultural adventure every Texan needs to experience) and at least two evenings at La Kiva.  On each trip I ask if anyone knows when Considine will be playing in the area.  I came close in 2008 when he was scheduled to play part of an all-day festival just four days after I had to leave.

I went back to Big Bend this past August and as always, I asked about him.  The bartender at La Kiva told me he was hosting an open-mic night the next evening.  After nine years I would finally get to hear him play.

This year, on the 20-year anniversary of my first trip out there, I decided to break my rigid traditional itinerary and venture out beyond the national park.  It was time to have a look at the state park, Big Bend Ranch.  My first stop was the Barton Warnock Visitor Center.  It was late afternoon when I pulled in.   We had just finished driving the most beautiful parts of FM 170, the River Road.  The place was deserted except for one park ranger who manned the counter.  I told him what I was looking for and we spent about a half hour poring over maps.  He marked the best Jeep and hiking trails for me.  I’ve always found the people at visitor centers to be friendly and helpful, but this guy went beyond that.  I can’t really explain it, but I felt a real connection.  This guy seemed to think like I do.

By the time we were done talking, it was five o-clock.  The actual exploration of the park would have to wait for another day.  I was supposed to meet some friends in Terlingua for some beer time on the porch and then dinner at the Starlight.  After a day on the road, I was dusty, sweaty and needed a change of clothes.  I used the visitor center’s washrooms to clean up. It wasn’t the shower I really wanted, but it would have to do.

Finished, I was ready to move on.  As I was leaving, the park ranger was ending his day as well.  While he was locking the doors on the washrooms, I thanked him one more time.  We said our goodbyes and I headed out.

After a great dinner, my friends and I got to La Kiva just as the sun was setting.  I asked the bartender if Laird was there yet.  He pointed him out.

There is only one window in La Kiva.  It is a glass sliding door that leads out to a patio on the creek bed.  I walked up to him, but really couldn’t see his face.  It was a trick of light.  With his back to the glass and the intense desert sunset behind him, it was impossible to make out his features.  He was nothing but a large shadow.  Nonetheless, I introduced myself quickly and told him how much I loved the Ghost Tones album, particularly three songs that I thought captured the Big Bend spirit better than anything I had ever read or heard.

His response was that I didn’t need to re-introduce myself.  He remembered my name from our first meeting—about three hours earlier. I moved off to the side so I could see his face and, sure enough, he was the ranger from the Barton Warnock Center.

We sat down at the bar and took a bit of time to get better acquainted.  We didn’t have long, of course, because he had to go to work.  He was playing the first two sets of the evening.

I was very impressed when he introduced my friends and me to the crowd and then played one of the favorites I had mentioned.  I listened to his whole first set feeling, I am almost embarrassed to say, a bit of hero worship.

At the first break I went out to the Jeep, pulled the Ghost Tones CD out of the player and brought it in for him to autograph.  He seemed humbled by it and surprised that I would still have an album that old with me on my travels.  And we talked some more.

In his next set he played my two other favorites.  All in all, it was the perfect end to a perfect Big Bend day.

I have to wonder sometimes about our society’s priorities.  We have people who barely finished high school making six-figure salaries in industry while high school and elementary teachers with master’s degrees struggle just to get by.  We pay exorbitant salaries to athletes and Hollywood types who have little or no understanding of the universe and how it works, yet some of our most gifted artists are struggling.

It’s easy to say that a singer/songwriter in far west Texas made his own choices.  He could have chosen to be an engineer, a doctor, or a CEO.  He chose to be a musician.  I’m not so sure that’s true.  I certainly did not have the option of becoming a painter, either of canvases or walls.  The result would have been pathetic.  And you certainly don’t want to hear me sing.  You would pay handsomely, just to get me to stop.  Those were not life options available to me.

I think we do what we are born to do, even if that means we have to work a different, day job to keep body and soul together. I am a professor by day, but I have to write to be truly alive.  I’ll never be the artist Considine is, but I still have to do it.  I have no choice in the matter.

There is no question that the day job stifles, to some degree, the creative process.  I sometimes think about just how much we lose because our artists are distracted from their work by the need to make financial ends meet.  What would happen if we just let these people, the most talented among us, do what they do best?  Laird is about to release his second album—more than nine years after the first.  How much beauty and insight have we missed out on in those intervening years?

I can’t help but think we as a society are impoverished by our misguided sense of priorities.  I’m not sure how we got to this point, but I have to believe there is a better way.  There has to be.

If I can find anything positive in all this, it is that at least Laird’s day job is a cool one.  Come to think of it, mine’s not too bad, either!

5 Commentss to “Texas Meditations – What Are We Thinking?”