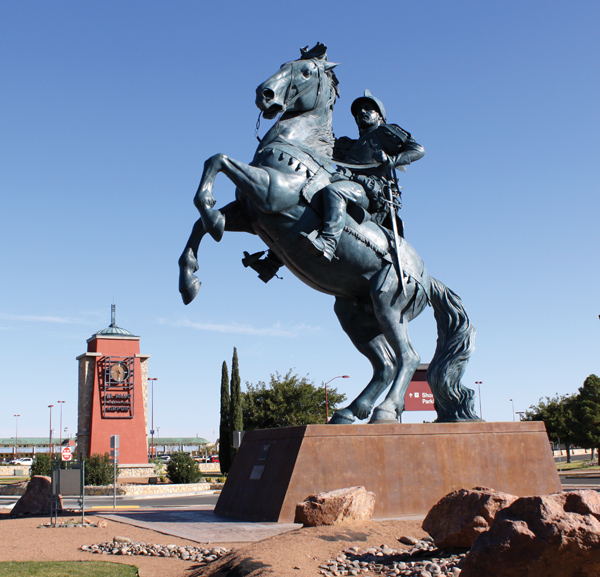 It had been an exhausting year.  I’d been running non-stop for months with work, house stuff and academic writing.  I needed to get away from it all for a while—far away.  And nowhere in Texas is farther away than El Paso.  Unfortunately, it was October and I was in mid-semester, so I could steal only three days.  That meant I had no choice; I had to fly.  It would be my first flight since 9/11.  I’ve always hated flying anyway, but the attacks gave me a socially acceptable excuse for staying on the ground.

Like everyone else who is forced to fly these days, I had the thoroughly rewarding experience of waiting in a long line, barefoot, both hands holding up my baggy jeans so they wouldn’t slide down around my knees while my belt and shoes went on their adventure through the x-ray machine.  It went downhill from there.  I got my nude photo taken and then got thoroughly groped by a large, burley guy in uniform who wasn’t my type at all.  When that ordeal was over, I chased down my clothes, dressed as quickly as I could and ran to escape Checkpoint Hell.  I suppose if you are a regular flier, you get used to all this fun.  I wasn’t.  When I finally made it to the plane, I squeezed into a seat that was too small for even a skinny guy.  I made up my mind it would be a long time before I did this again.

But as the sun was setting, I rode past The Equestrian statue at the exit of the El Paso airport in my rented Jeep and thought, “There, now I can play.”

It didn’t happen that way.  First I had to find my hotel.  That in itself proved to be a real ordeal.  It was full dark before I got all my luggage to the room and was finally ready to venture out and find that small Mexican restaurant the lady at the rental car counter told me was known only to locals.  Finding a place you’ve never been to, especially in a city with one-way streets, is not an easy trick in the daylight.  At night it can be close to impossible.  After a full hour of driving, I pulled into the right place.  I was surprised to find I could see my hotel from the parking spot.  Sometimes things just go that way.

It was worth the trouble.  The place wasn’t much to look at, but I know from experience that appearance of the building has little to do with the quality of the food.  A plate of exquisite green enchiladas and a couple of margaritas later I headed back to the hotel.  The return trip took less than five minutes.

The next morning I headed into New Mexico to approach the Franklin Mountains from the west.  I wasn’t disappointed.  The road led into a deep cove with mountains on three sides.  Every time I thought I was nearing the end of the pavement and approaching the trailhead, I came around a bend and found that the road kept going.  Finally, a half hour into the cove, I came to the gravel parking area at the trailhead.  There was room for maybe three cars if everyone parked carefully, but I was the only one there.

The trail didn’t disappoint me.  It was a long, gradual climb that wasn’t too steep.  I only had to stop to catch my breath two or three times on the way up.  But something was wrong.  The scenery was indeed spectacular, the autumn day was cool but sunny, and yet, instead of relaxing and enjoying where I was, I found myself planning for tasks on my to-do list.  Even after the rough year I’d had, there was no relief on the horizon.  Life promised to stay hectic and crazy for at least another six months.

But this was not the place for that kind of thinking.  I walked, took a few photos, but always found myself obsessing about how I was going to handle all the stuff that was coming up.  I tried to force myself to quit having those thoughts.  Every time one of them snuck in, I banished it in favor of just looking at the magnificence around me.  But in just seconds, the thoughts were back—my thinking had become pathologic.

I sometimes marvel at how much time and effort we spend working toward goals.  Not just the big, long term goals we all need to have, but small goals that accompany all the minutia in our lives.  I want to get the lawn fertilized, get four pages written on my next project, get two classes’ papers graded, prep a lecture for a conference three weeks down the road and get the garage painted.

In the midst of laying out my schedule, an armadillo crossed the path in front of me.  I froze in place so as not to scare him off.  They don’t see very well so if you stay still, you can often watch them for an extended period of time.  He looked around, sniffed a lot, rooted a bit, and then casually moved on.  I thought about how his life was so different from mine.  He lives on a beautiful mountain, doesn’t know about deadlines, never has to deal with traffic and doesn’t even own a watch.

Both of the dominant philosophies of our day, existentialism and nihilism, share a premise that life is of dubious value.  We can’t win, we won’t get out of this alive and most of us will die alone.  With this premise in mind, several philosophers have offered ideas for trying to find some value and meaning in life.  One notion that is widely shared is to see life as merely a preparation, a trial, a period of working toward an ultimate reward that makes it all worthwhile.  Plainly put, we struggle in this life so we can have a better, maybe even perfect, afterlife.

I guess I’d never given it much thought before this day.  I always saw myself working feverishly to get to a better time in this life.  But as I get older, I’m starting to question how likely that is to happen.  Will I always be working toward a better tomorrow until I finally run out of tomorrows?  If that turns out to be the way it happens, the existentialists might be right.  Maybe life ends with us still striving for that better tomorrow.

I thought again about the armadillo.  I think he is probably pretty typical of his fellow animals, and I suspect I might be fairly representative of my human brethren.  We humans struggle all our lives for a better tomorrow and then come to a sad end.   But we cling to hope right to the end.  Man is the only creature who enjoys the consolation prize of believing in an afterlife.  I’m not so sure that is a good thing.  All the other animals enjoy the consolation of not having to think about an afterlife at all.

I think that is why, in my wisest moments, I am running off to get away from the normal human striving.  I climb a mountain in El Paso, sit on the Frio River bank and eat Chicken Earl’s, drink beer and listen to the music at Luckenbach, or just sit at the outdoor bar at Sam’s Boat in Seabrook, taking in the sunset over Clear Lake.  If I were really as smart as I wish I were, I’d be doing a lot less striving and a lot more of this kind of thing right now.

When you think about it, we’re all running out of sunsets.