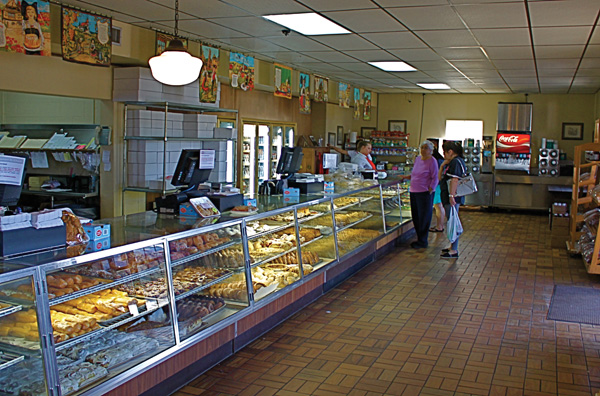 Have you ever noticed our most powerful memories are associated with the sense of smell?  When I smell Chantilly perfume I am immediately transported back to a time with my first girlfriend in high school.  The smell of diesel exhaust takes me to the steel mills in my college summers.  And a cigar…well, I’m ten years old and at Wrigley field with my dad, watching a Cubs’ game.

I’ve heard lots of reasons why scent memories are so strong.  The most common explanation is that the olfactory nerve is located close to the part of the brain associated with memory.  In fact, when brain damage impairs memory, we also lose the ability to differentiate smells.  I chose to ignore the science and instead enjoy the romance of my memories of smells.

I was on my way to Uvalde and decided to do something completely out of character.  I had driven highway 90 through here dozens of times and every time I passed through Castroville I’d see Haby’s bakery and wonder what it was like in there.  You see, I avoid places like that to protect me from myself—from my lack of self-control.  In fact, I hadn’t been in an old-fashioned bakery since I was a child.   I can’t say why, but on this day I felt compelled to stop.

I pulled in, shut off the Jeep and went inside.  Immediately upon opening the doors it hit me.  It was 1960 and I was in Sockitt’s Bakery on Fifth Avenue in Gary, Indiana.  I stood at the door for a few minutes, just taking it all in.  Two of the women behind the counter looked my way from time to time, probably wondering why this lunatic was just standing there blocking the door.  Other customers came in, squeezed around me and found their way to the counter. I continued to stand there.

After a few minutes of being bumped into by other customers trying to enter, I moved out of the doorway and started meandering through the store.  By examining the vast selection of breads, rolls and pastries, I found I was able to prolong my stay.  I continued doing that until my nostrils became accustomed to the smell and I could barely detect it.  As my ability to experience the scent diminished, I started to analyze what happened.  I was amazed when I came to the conclusion that, after all these years, I still remember that smell perfectly.

Then came the real shock—that memory was from 53 years ago!  It was like getting hit in the face with a door.

When I think about an event in the past, the memory is often vivid and fresh.  I know, for example, that I was in grad school until just recently.  But then I think about it for a minute and realize that was in the 1980s.  I worked as a sports writer only a few years ago—but that was in the 70s.  And I just recently moved to Texas—twenty-one years ago!  When I do the math and think about those numbers, I am staggered.  Could it possibly have been that long ago?

Modern physics has some interesting takes on this idea of how we experience time.  There seems to be a general agreement that our view of time as linear (past, present future) is a completely artificial construct that we humans have created to make it easier to understand our lives and to organize our thinking about the world we live in.  In one view, time and space are not two separate things; rather there is a single thing called the space-time continuum.

Yet another view is that all times exist simultaneously.  Take for example, a DVD.  While we can put it into a machine and buy into an artificial idea of time by watching a two-hour movie, the reality is that every second of those two hours exists there in the moment we hold that DVD in our hand.  It is all there at that same instant.

If that is true, then time might be anything we want it to be.  “Time flies when you’re having fun,” but what happens to it when you are in the waiting room of a doctor or dentist?  Apparently, time runs at different speeds on different occasions.

I’m starting to think that, in many instances, we chose, subconsciously perhaps, to distort time.  This manipulation allows us to engage in alternative interpretations, ones more palatable perhaps, as we look back on our lives.  What the clock or the calendar says may not reflect the reality that we “know” about ourselves.  The calendar says I am in my sixties.  My internal clock tells me I still feel like a man in his 20s, insecurities and all.  After all, weren’t my twenties just a few short months ago?

Why would we do this?  I think it might be a form of self-protection.  If I can feel like I just left grad school instead of it being more than 20 years ago, I can avoid feeling old, or worse, having to accept that I might be getting close to the end.  But when you do the math, reality comes roaring back.

Still, even when the truth is staring me in the face, I have choices.  I can choose to be shocked at how long ago seemingly recent events really were.  That was the choice I made at the bakery.  Or I can choose to feel angry, or sorry for myself because it took me so long to understand something so critical to happiness and fulfillment in life—that it all goes by so fast!

But I think there are better ways of looking at this.  I can ask a different set of questions.  I might start with “have I made the most of it up until now?”  Most of us would probably be disappointed, maybe even horrified, by our answer.

But perhaps there is another, yet more important question we should ask.

“With this new-found realization of how short life really is, will I do better from now on?”