Your help needed on the Ike Dike Project 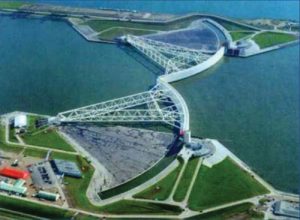 It’s not a question of if but when will another massive hurricane slam the Texas Gulf Coast. We’ve heard it said over and over ever since Hurricane Ike ravaged our homes and businesses back in 2008.

This time as he did, he looked out over the crowd of business men and women, educators and homeowners, hoping for assistance.

“We need help. We need money from the state to finance additional studies of the problem, and we need money from the federal government to pay for the $11 billion needed to build the Coastal Spine and ‘Ike Dike’ gate across the mouth of Galveston Bay to hold back the storm surge, which does most of the damage.

“Most of all, we need you to encourage our elected officials on all levels to support storm surge suppression,” he said.
He wants each of us to write, email, call, contact our legislators and congressmen to help us, even congressional representatives you may know in other states.

That’s why we send them to Washington – to help us when we need help.

Aid for New Orleans
It shouldn’t be a problem for Congress. When New Orleans was hit by Katrina, Mitchell said, the city received $14.5 billion from the federal government and another $1.8 billion for a pumping system to protect its 340,000 residents when future storms hit. Its economic value to the nation, Mitchell said, is less than 1/16th of the economic impact of the Houston area.
Congress also came to the aid of New York when Tropical Storm Sandy did millions of dollars in damages.

Then, Mitchell turned the crowd’s attention to the local region. “The Houston-Galveston area is the nation’s fifth largest Metropolitan Statistical Area with more than 6.5 million residents. One in four Texas residents live along the Gulf Coast,” he said, pointing out some interesting facts:

History of the effort
Mitchell also traced the history of the Coastal Spine storm surge protection project: how Dr. Bill Merrell of Texas A&M-Galveston proposed an “Ike Dike” back in 2009 to protect the area; how officials made two exploratory trips to The Netherlands to learn how the Dutch protected their land from surge; work with the congressional delegation; and the five studies initiated on economic impact, environmental mitigation, barrier designs and cost/benefit ratios.

“BAHEP believes the Coastal Spine is the best available surge protection system for the Houston/Galveston region:

Now we need help in getting the money.