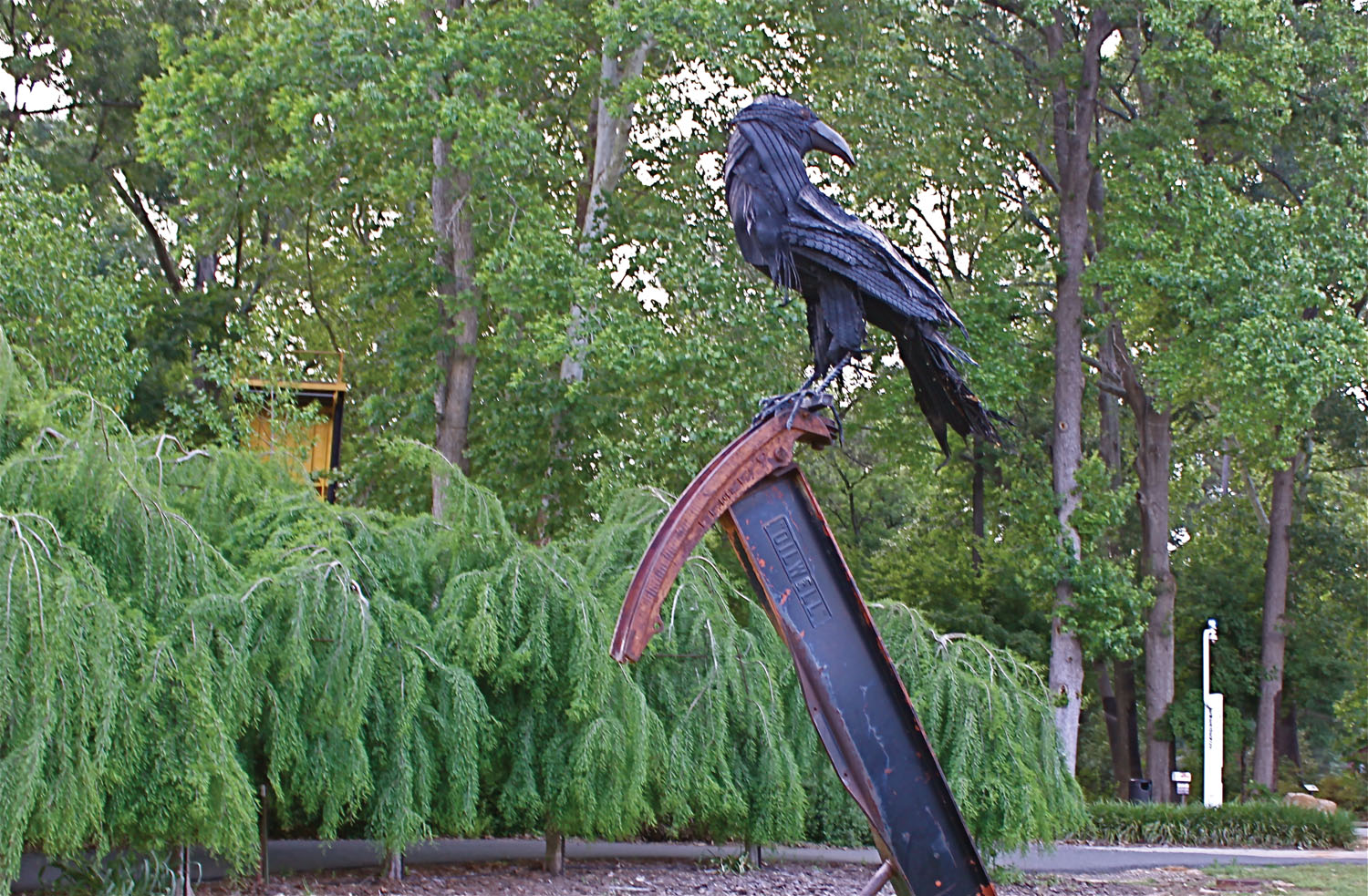 The metal sculpture in the Mize Azalea Gardens

He laid the photo on the table.

I did.  It was a picture of a young man standing in thigh-deep snow spinning a basketball on his finger.

The man in the picture was a boy really—just barely beyond a child.

“We were playing Horse because the snow was just too deep for a one-on-one game.  Do you remember?”

In Indiana, basketball is a religion—one shared by nearly everyone in the state.  Babies have basketballs in their cribs from birth; not toy ones, the real thing so they can get used to the feel of the ball early.  When I was a kid, this was the universal toy in every boy’s crib.  (Today, it is in most girls’ cribs as well, though the girls’ ball has a slightly smaller diameter to make ball handling easier for smaller hands and to improve shooting percentage.)  Playing in the deep snow was certainly something we did on a regular basis.  We didn’t have a choice.  In Indiana, there are only two winter sports: basketball and flying to Florida.

As I looked at the picture, I remembered the event.  I even recognized the face.  But it was someone else.  It wasn’t me.

We were at Stephan F. Austin University for a small conference and I hadn’t seen him since college, 40 years earlier.  He had seen my name on the program and contacted me by email to schedule a meeting at the hotel bar.  In general, I try not to dwell too much on the past; life today is so much better that I can’t see spending time on days gone by at the expense of enjoying the present.  But sometimes it is fun to take an hour or so to reminisce.  That’s what we decided to do this day.

The first thing I noticed about him was that a shiny scalp had replaced all the curly brown hair I remembered.  I guess it really had been a long time.  Nevertheless, we picked up right where we left off decades before.  We talked about the old days—about weekends spent camping at state parks and weekdays in classes and at Harry’s, our favorite campus bar.  We talked about old classmates, most of whom we’d lost track of long ago, and about our professors, many of whom had passed on.  And we talked about how different the SFA campus was from the world we experienced at Purdue.  We came to the conclusion that we were indeed privileged.

When the conference was over, I spent some time in the Mize Azalea Garden on campus just walking around enjoying the spring day.  But I couldn’t get my mind off that photo . . . and the boy in it.  It was me, of course, but it really wasn’t.

I’m not sure if the events in Nacogdoches predisposed my mind to seeing things differently or if it was just a series of coincidences, but over the next few days, almost everywhere I turned were old pictures of me.  In my wife’s office there were two pictures: one of a six-year old sitting on Santa’s lap and another of a frightened 14 year-old boy who was absolutely sure that, given the neighborhood he lived in and the school he went to, he would never live to see his high school graduation. In my office was a photo of a man posing with an older woman, his famous major professor, as he finished the Ph.D. and felt invincible.  At home, in our master bathroom was one of a man in a cowboy hat sitting with a Corona in hand at the bar at the Gage Hotel in Marathon.  He was completely relaxed, finally in his own element.

The pictures were everywhere.  And I thought about all of the people in them.  I’ve seen baby photos of me, but I don’t remember that guy.  I’ve seen photos of a lifeguard with very brown skin and hair almost white from the sun and photos of a young man in a suit about to graduate high school and then college.  Frankly, I was taken aback by just how many different people I saw in those pictures.

Changes of any type tend to happen gradually and the more gradual the change, the less likely we are to notice it.  No one has a full head of hair one day and is bald the next (not a problem here, by the way).  However, over 10 or 20 years, the changes are dramatic enough that we really do notice.

But those changes happen slowly only if we buy into that artificial, man-made construct of time as a series of events (this happens, then this happens, etc.).  What if instead we look at it the way many physicists do, that all times exist simultaneously?

Consider for a minute a DVD.  On that one disk lays all the information necessary for, say, a two-hour movie.  If we put it into a player, we can actually see the events of the film, one after the other.  And it will take two hours to view the entire sequence.  Yet, when we hold that disk in our hands, is there any doubt that the entire two hours of the movie is present in its entirety at that instant?  Likewise, when I looked at those photos, the entire 60 plus years of that story were all present right then.

The changes I could easily see in those photos, the physical changes, were nothing compared to those that were harder to see.  Behind those faces were several very different people.  When I look at those photos today, I quickly come to see that this was not the story of a single person.  At times, it is hard to accept that so many dramatically different people have occupied that same body.  Some of them were so different as to be completely incompatible with each other.  Yet here, in the pictures, lies proof that they all indeed were there at one point in time.

Of course, the changes over time probably don’t stop.  Ever.  This suggests that another photo taken, say 10 years down the road, will be of yet another person—someone I haven’t met yet.

There is nothing like an old picture to remind you of how many people have hidden out behind that face.  I can’t wait to see who the next one will be.

Tags: Nacogdoches Texas, Who Am I? By Michael Gos
Posted in News | 3 Comments