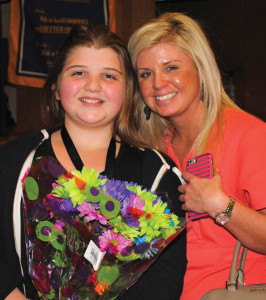 Whitcomb Elementary student Brooklyn Krell gets a big hug from her mother, Cassandra Tucker, after being the first of five in her fifth grade class to be knighted during the school’s Jan. 12 Knighting Ceremony for their excellent behavior.

Whitcomb Elementary School students were in for a surprise Jan. 12 when they joined Space Center Rotary Club members for their EarlyAct FirstKnight Knighting Ceremony at the Clear Lake City campus.

Joining them was the Rotary International President K.R. Ravindran of Sri Lanka, who heard what a success the Whitcomb character building program had become and wanted to see it first hand while on a visit to the United States.

He and his wife appeared delighted as they watched Sir James Lehman knight fifth graders Brooklyn Krell, Maja Potocnik, Daniel Hirsh, Hannah Le and Amanda Alicea for their good character and responsible behavior such as being accountable for their choices, turning in their work on time and never giving up.

Sir James and Sir Jack Bacon also awarded medallions to 27 other students – one from each classroom from kindergarten through the fourth grade as their teachers introduced them to the well-mannered crowd of several hundred Whitcomb students. The school is one of only 14 campuses in Harris County and the surrounding eight counties that have the EarlyAct FirstKnight program.

Based on the theme of gallant knights and Rotarian values, EarlyAct First Knight is a curriculum-based character building program for elementary and middle schools, teaching students how to become noble, service-oriented people, along with why it is important for them to do so. It can only be sponsored by a Rotary Club, which funds the costs for the program.

Each month, Space Center Rotary President John Branch told the crowd, the students focus on one character virtue and each month one student is selected from each classroom to be honored. The program has been found to be amazingly effective with 100 percent of the participating schools crediting the program with significantly increased academic scores, decreased behavioral issues, more teaching time and happier faculties and parents.