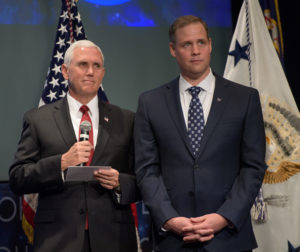 After receiving a record-breaking number of applications to join an exciting future of space exploration, NASA has selected its largest astronaut class since 2000. Rising to the top of more than 18,300 applicants, NASA chose 12 women and men as the agency’s new astronaut candidates.

Vice President Mike Pence joined NASA leaders Wednesday as they introduced the members of the 2017 astronaut class during an event at the agency’s Johnson Space Center in Houston. While at Johnson, the vice president toured the International Space Station mission control center, and the historic mission control center, which was used during early NASA spaceflights, including the first moon landing mission, Apollo 11. He also was presented with a model of the International Space Station and a framed U.S. flag that was flown to and from the orbiting laboratory this winter.

“These are 12 men and women whose personal excellence and whose personal courage will carry our nation to even greater heights of discovery and who I know will inspire our children and our grandchildren every bit as much as your forebears have done so in this storied American program,” said Vice President Pence.

“And to this newest class of astronauts, it’s my honor to bring the sincere congratulations of the 45th President of the United States of America, President Donald Trump. Your President is proud of you, and so am I.”

The astronaut candidates will return to Johnson in August to begin two years of training. Then they could be assigned to any of a variety of missions, including: performing research on the International Space Station, launching from American soil on spacecraft built by commercial companies, and departing for deep space missions on NASA’s new Orion spacecraft and Space Launch System rocket.

“We look forward to the energy and talent of these astronauts fueling our exciting future of discovery,” acting NASA Administrator Robert Lightfoot said. “Between expanding the crew on board the space station to conduct more research than ever before, and making preparations to send humans farther into space than we’ve ever been, we are going to keep them busy. These candidates are an important addition to the NASA family and the nation’s human spaceflight team.”

Applicants included U.S. citizens in all 50 states, the District of Columbia, and U.S. territories Puerto Rico, Guam, and American Samoa. The talented women and men selected for the new astronaut class represent the diversity of America and the career paths that can lead to a place in America’s astronaut corps.

The 2017 astronaut candidates are:

Kayla Barron, 29, Lt., U.S. Navy, is originally from Richland, Wash. She graduated from the U.S. Naval Academy with a bachelor’s degree in systems engineering. A Gates Cambridge Scholar, Barron earned a master’s degree in nuclear engineering from the University of Cambridge. As a submarine warfare officer, Barron was a member of the first class of women commissioned into the submarine community. She’ll come to NASA from the U.S. Naval Academy, where she has been serving as the flag aide to the superintendent.

Zena Cardman, 29, calls Williamsburg, Va., home. She completed a Bachelor of Science in Biology and Master of Science in Marine Sciences at The University of North Carolina, Chapel Hill. Cardman is currently a National Science Foundation Graduate Research Fellow working on her doctorate at The Pennsylvania State University. Her research has focused on microorganisms in subsurface environments, ranging from caves to deep sea sediments. Her field experience includes multiple Antarctic expeditions, work aboard research vessels as both scientist and crew, and NASA analog missions in British Columbia, Idaho and Hawaii.

Raja Chari, 39, Lt. Col., U.S. Air Force, hails from Waterloo, Iowa. He graduated from the U.S. Air Force Academy with bachelor’s degrees in astronautical engineering and engineering science. He continued on to earn a master’s degree in aeronautics and astronautics from Massachusetts Institute of Technology (MIT) and graduated from the U.S. Naval Test Pilot School. Chari has been serving as the commander of the 461st Flight Test Squadron and the director of the F-35 Integrated Test Force at Edwards Air Force Base in California.

Matthew Dominick, 35, Lt. Cmdr., U.S. Navy, was born and raised in Wheat Ridge, Colo. He earned a Bachelor of Science in Electrical Engineering from the University of San Diego and a Master of Science in Systems Engineering from the Naval Postgraduate School. He also graduated from the U.S. Naval Test Pilot School. Dominick was at sea on the USS Ronald Reagan, serving as department head for Strike Fighter Squadron 115, when he got the call saying he’d been selected as an astronaut candidate.

Bob Hines, 42, considers Harrisburg, Penn., his hometown. He graduated from Boston University with a bachelor’s degree in aerospace engineering. From there, he went on to graduate from the U.S. Air Force Test Pilot School, and then the University of Alabama, where he earned a master’s degree in aerospace engineering. He has served in the U.S. Air Force and Air Force Reserves for 18 years. For the last five years, Hines has served as a NASA research pilot at Johnson.

Warren “Woody” Hoburg, 31, is originally from Pittsburgh, Pennsylvania. He earned a bachelor’s degree in aeronautics and astronautics from MIT. He continued on to earn a doctorate in electrical engineering and computer science from the University of California, Berkley. He is a private pilot and has extensive experience with wilderness search and rescue efforts. Hoburg will come to NASA from MIT, where he currently is leading a research group as an assistant professor of Aeronautics and Astronautics.

Dr. Jonny Kim, 33, Lt., U.S. Navy, was born and raised in Los Angeles. He enlisted in the U.S. Navy, then trained and operated as a Navy SEAL, completing more than 100 combat operations and earning a Silver Star and Bronze Star with Combat V. Afterward, he went on to complete a degree in mathematics at the University of San Diego and a doctorate of medicine at Harvard Medical School. Kim is a resident physician in emergency medicine at Massachusetts General Hospital.

Robb Kulin, 33, hails from Anchorage, Alaska. He earned a bachelor’s degree in mechanical engineering from the University of Denver before going on to complete a master’s degree in materials science and a doctorate in engineering at the University of California, San Diego. He has previous experience as an ice driller in Antarctica on the West Antarctic Ice Sheet and Taylor Glaciers, and as a commercial fisherman in Chignik, Alaska. Since 2011, Kulin has worked for SpaceX in Hawthorne, California, where he leads the Launch Chief Engineering group.

Jasmin Moghbeli, 33, Maj., U.S. Marine Corps, considers Baldwin, New York, her hometown. She earned a bachelor’s degree in aerospace engineering with information technology at MIT, followed by a master’s degree in aerospace engineering from the Naval Postgraduate School. She also is a distinguished graduate of the U.S. Naval Test Pilot School. Moghbeli currently tests H-1 helicopters and serves as the quality assurance and avionics officer for Marine Operational Test and Evaluation Squadron 1 in Yuma, Arizona.

Loral O’Hara, 34, calls Sugar Land, Texas, home. She earned a bachelor’s degree in aerospace engineering at the University of Kansas and a master’s degree in aeronautics and astronautics from Purdue University. As a student, she participated in NASA’s KC-135 Reduced Gravity Student Flight Opportunities Program, the NASA Academy at the agency’s Goddard Space Flight Center, and the internship program at NASA’s Jet Propulsion Laboratory. O’Hara is currently a research engineer at Woods Hole Oceanographic Institution in Woods Hole, Massachusetts.

Dr. Francisco “Frank” Rubio, 41, Maj., U.S. Army, is originally from Miami. He earned a bachelor’s degree in international relations at the U.S. Military Academy at West Point and a doctorate of medicine from the Uniformed Services University of the Health Sciences. Rubio has accumulated more than 1,100 hours of flight time in helicopters, including 600 hours of combat and imminent danger time. He’s currently serving as a surgeon for the 3rd Battalion of the Army’s 10th Special Forces Group at Fort Carson, Colorado.

Jessica Watkins, 29, hails from Lafayette, Colorado. She graduated from Stanford University with a bachelor’s degree in geological and environmental sciences, then went on to earn a doctorate in geology from the University of California, Los Angeles. Watkins has worked at NASA’s Ames Research Center and Jet Propulsion Laboratory and currently is a postdoctoral fellow at the California Institute of Technology, where she collaborates on the Mars Science Laboratory rover, Curiosity.

With the addition of these 12 members of the 2017 astronaut candidate class, NASA now has selected 350 astronauts since the original Mercury 7 in 1959.

“These women and men deserve our enthusiastic congratulations,” said astronaut and Johnson Space Center Director Ellen Ochoa. “Children all across the United States right now dream of being in their shoes someday. We here at NASA are excited to welcome them to the team and look forward to working with them to inspire the next generation of explorers.”

The astronaut candidates will be available to talk to media in person at Johnson and by remote satellite link on June 8. Media interested in this limited opportunity should contact the Johnson newsroom at 281-483-5111.

Find photos and additional information about the new astronaut candidates at: https://www.nasa.gov/2017Astronauts