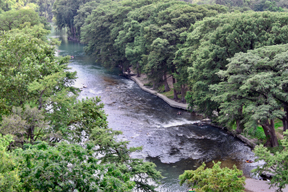 My running buddy and I were surrounded by what appeared to be an ocean of college kids, each dragging a tube and some with elaborate beer-cooler/multi-tube floatation systems that suggested these people were not the novice river runner I was. I felt a bit out of place, but at the same time, I was looking forward to trying this classic Texas activity—even if I was bit on the geriatric side.

As we stood on the bank, the bus driver/guide told us about the four sets of rapids we would encounter and how to safely negotiate our way around each. The first was Hueco Falls and we were told to stay to the far left. When he was finished, we waded into the icy water. It was absolutely shocking on entry, but after a few seconds it felt great on this blazing August day.

Feeling like a hippo trying to mount a tricycle, I fought my way onto the tube and began my trip downstream. Seconds later, I was underwater with a snoot full of river and the rather unpleasant sensation of bouncing off rocks. The driver failed to tell us Hueco Falls was barely 100 yards from our put-in point.

After what seemed like minutes underwater, being battered repeatedly, I surfaced at the end of the falls minus my tube. It seemed my day on the river had come to an abrupt end after less than two minutes and I was going to be paying for a lost tube. I struggled over to the left bank and hung on a tree root, just trying to catch my breath.

About five minutes later I heard a young man shout, “Did anyone lose a tube?” I guess my day wasn’t over after all. I retrieved the tube, thanked him profusely and then rested a few more minutes. Finally, hanging onto the tube for dear life, I waded down to a shallower spot where I would be able to once again “gracefully” climb aboard.

The rest of the trip turned out to be much less eventful, and at the end of the day, we pulled out in beautiful downtown Gruene. I returned the tube, changed clothes and headed to the Gristmill for dinner.

Sitting in one of the open areas overlooking the river, I enjoyed a chicken fried steak and a Corona. I planned to attend a show at Gruene Hall that night, so I just hung out there on the deck for a couple of hours watching the river run far below me and listening to restaurant’s music (which, by the way, was far more appropriate for someone my age than the people I had shared the river with that day). About an hour later, Cream’s “Sunshine of Your Love” came on and instantly, I was 17 again with a guitar hanging around my neck.
Like most kids in the ‘60s, I was part of a very bad garage band. We never amounted to anything, but we had a great time and dreamed of the day we would be more famous than the Beatles. One of the songs we played was this Cream hit and it led to one of my proudest moments. Well, it was at the time anyway. The song ends with a continuous striking of a single chord as the sound fades out. But the chord didn’t give closure to the song. While Cream made it work on the record by fading out the sound, in live performances, you can’t do that; songs need to end.

That open cadence drove me crazy for weeks and one practice day, as we finished the song, I just couldn’t take it anymore and I hit the chord that would give the song closure. Immediately, I, and everyone else in the band, recognized it as the first of the three-chord opening to the Who’s “I can See for Miles.” We segued immediately into that song and loved the way it sounded. Forever after, we performed those two songs together.

Back then, I didn’t understand that music was just math and architecture was frozen music. If I did, this “discovery” would have been no big deal. It would have been obvious if I just looked at it mathematically. But I didn’t know that then; I just knew that the final chord left us hanging and it drove me crazy. I had to close the loop. The way it happened was serendipity at its best—a totally pleasant accident.

Some of our most interesting discoveries have come from this kind of serendipitous event. Penicillin, Post-it notes, Viagra and even microwave ovens were all happy accidents. We are always shocked and delighted when they happen. We treat these events as if they were gifts— or even miracles—and in a sense, they are.

But I really have to wonder if these things we call serendipitous are really accidental or even all that rare for that matter. If you think about it, these “accidents” appear to be all around us, and they are happening far too often to be considered rare. A quick Google search will give you list after list of them—things like The Top 100 Serendipitous Scientific Discoveries. I wonder if they just might be the norm, rather than special events.

If they are indeed as common as I suspect, perhaps the thing that turns these everyday events into serendipity is our ability to see them when they are right there in front of us.
How many do we miss just because we aren’t open to them, or more important, are not expecting them? I wonder if it is possible to not only expect these happy accidents but, more importantly, to make a concerted effort to look for them. Maybe it is somewhat like hunting for morel mushrooms. They seem to be rare and very hard to find, but once you get “in the zone,” you realize they are everywhere. It may take two hours to get there, but once you do, you can gather a basket full of them in five minutes.

I experienced two “accidents” on this day, one not-so-pleasant one over Hueco falls (which I later learned was actually a Class III rapid; I guess I was lucky to just get a little bruised) and another in remembering my “discovery” of the connector between two songs. Yet I can’t help but wonder, how many other happy accidents didI miss on this, and every other day of my life.

How much more could we accomplish if we just made a concerted effort to be open to, and more importantly, to expect these events and be prepared to act on them when they occur?