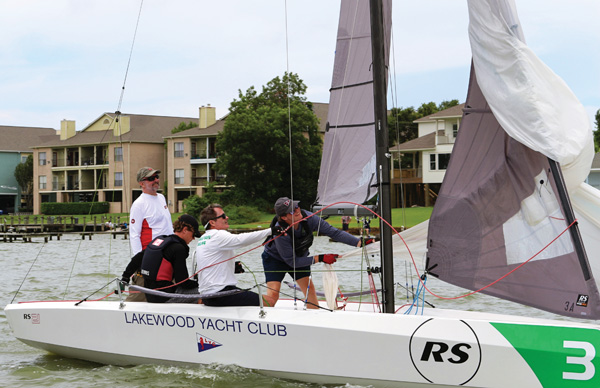 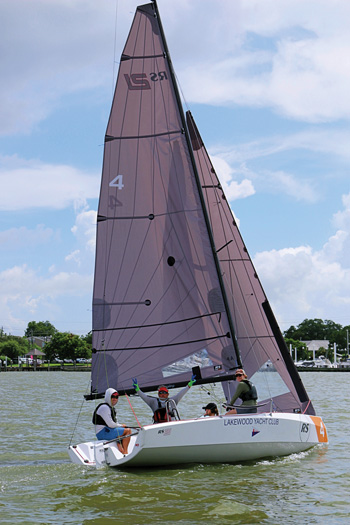 Lakewood Yacht Club hosted the first RS21 North American Championship with their new RS21 club sailboats! These boats proved to be fast, fun to sail and every racer was able to rotate their boat every few races. This regatta became a race of sailing skill and not how a team could best modify a boat for racing.

The event had a competitive fleet of 17 teams consisting of Olympic and National Champion sailors sailing 24 races in 3 days. Due to the boat rotation, these races where short and plentiful each day sailing the race course at the east end of Clearlake where there are a lot of wind shifts. However, it didn’t prove to be an advantage to the local sailors because the Lucky Dog Racing Team from New Jersey, skippered by Travis Weisleder with his crew Marcus Eagan, Chandler Self and John Bowden, dominated the event and won 11 of 15 races sailed in these very shifty and puffy conditions.

On the final day, the fleet was separated into the Gold and Silver Fleet, with each fleet sailing three races each. In the Gold Fleet, Second Place was hotly contested by John Lovell of New Orleans and Glenn Darden from Fort Worth Texas who both tied for second place before the very last mark when Lovell had to make a penalty turn issued by one of the “on the water umpires”, allowing Darden to comfortably finish in Second Place. The local club sailors were well represented by Danny Plestch in 4th who won a tiebreaker over Casey Lambert who finished 5th.

This new format for a Championship Regatta provided a very fast pace exhilarating Regatta! The race course was kept short enough to keep the championship exciting for the spectator instead of watching a typical sailing event that is similar to “watching grass grow” while the boats sail over the horizon. The new race format allowed for a big fleet of spectators to watch this exciting fast-moving championship.

On the water, the event was run by Ed Furry with Sail22.com with the help of the Lakewood Yacht Club race committee. New revolutionary GPS Harken Mark Bots were used for the first time in an sailing event that enabled the race committee to move all the marks by computer from the Race Committee boat which allowed quicker changes to be made to the race course. These GPS based marks could be moved as fast as the last boat rounding them because they didn’t require the addition of an anchor or a team to pull them up and relocate them to the next mark rounding. The marks just moved themselves to the new location sent by the race committee! 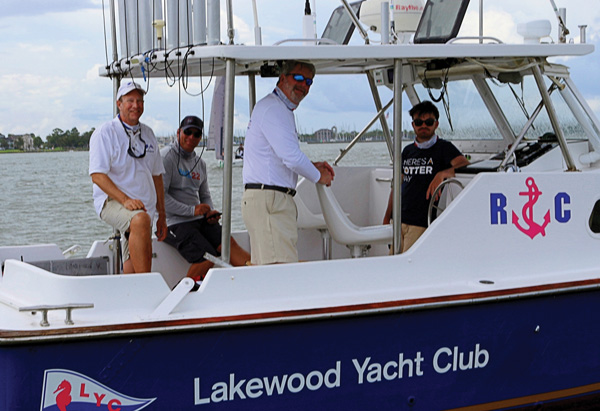 Although the post-race gathering was limited by social distancing, as required by the CDC, the Yacht Club staff still managed to make social distancing fun thanks to all the Sponsors:  RS Sailing, Sail22, Harken, Regatta Premium Craft Mixers, Severance Insurance Agency, KO Sailing, Blackburn Marine, Sea Lake Yachts, and Pelican Insurance Agency. At the outside awards presentation, all the competitors praised Lakewood Yacht Club & Chairperson Marie Wise for providing a fast pace competitive sailing event on their new RS21 sailboats and hosting this event during these difficult times. All the Racers are looking forward to another exciting Regatta!

Currently, Lakewood Yacht Club is planning to host many more events like this one using their new fleet of fun and exciting sailboats.  For information on these future events, look up lakewoodyachtclub.com/sailing events on the web.