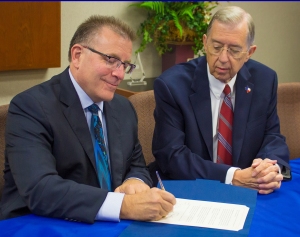 The Texas Chiropractic College Board of Regents has named Dr. Brad McKechnie as the institution’s 14th president, after serving as the interim president since April 2014.

In addition to his teaching and administrative experience with TCC, Dr. McKechnie has been an active lecturer in postgraduate education, conducting more than 300 seminars, primarily in chiropractic neurology. He received his diplomate from the American Chiropractic Academy of Neurology in 1989 and went on to serve as the organization’s president from 1989 to 1991 and as a member of its examining board. He regularly shared his expertise in chiropractic neurology as a columnist for Dynamic Chiropractic, authoring more than 40 articles for the professional publication.

“Throughout its history, Texas Chiropractic College has been a leader in the education of new chiropractors and as a provider of postgraduate education for practicing chiropractors,” noted Dr. Monte Blue, chairman of the TCC Board of Regents. “With his successful backgrounds in chiropractic education and in private practice, I believe Dr. McKechnie is the right person to lead TCC for many years to come.”

He has additionally served the profession as the chiropractic representative to the Texas Workers’ Compensation Commission’s Medical Advisory Committee (1991-94) and as a member of the National Chiropractic Healthcare Advisory Committee to the Bill Clinton Administration (1993-94). Most recently, Dr. McKechnie has been a member of the Texas Department of Insurance – Division of Workers’ Compensation Medical Quality Review Panel (2004- present) and Quality Assurance Panel (2008 to present).