Surf fishing starts in May 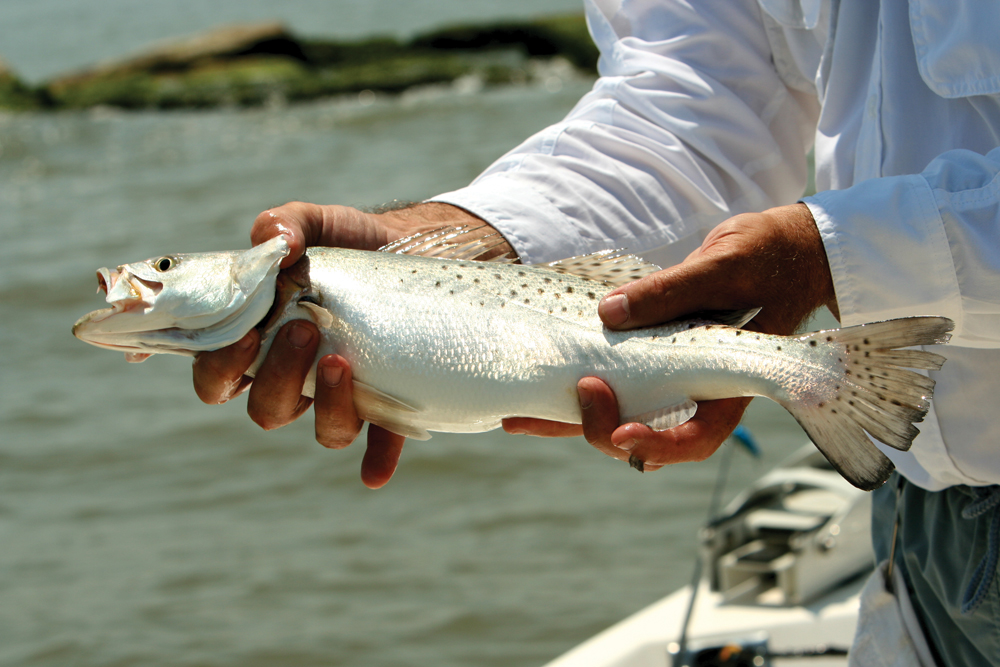 May is the month when we start seeing the average wind velocities drop on coastal waters.  It also is a month when the surf turns on for the first time each year.

Old timers on the fishing scene, who love surf fishing, usually wait until May to get excited about fishing the beachfront.  By Mother’s Day Weekend, the water temperature is usually pushing 80 degrees and the surf is ripe for wade fishing.

While May is the month, it is not a time when the surf produces continuously.  At some point during the month we almost always have one of the last of the winter cold fronts pass through and following its passage will be light northerly winds that flatten the surf.

It is during those May events that some of the best surf fishing of the year takes place.

During this time, the water is warm enough to wade fish without insulated waders and the action tends to be “off of the charts” as one seasoned surf fishing guide described it.

For the purpose of those who are either new to coastal surf fishing or have had limited experience on this topic, we will attempt to give some pointers and recommendations that will enhance your chances to have a successful fishing experience.

There is an old adage that says 10% of the fishermen catch 90% of the fish.  Well, there is a reason for this, especially when it applies to surf fishing.
Some of the key elements that affect success in the surf are wind direction and velocity, ability to predict when good fishing conditions will arise and knowing the baits and how to fish them.

Often, there will be pictures in the paper showing heavy stringers of fish being hauled in by wade fishermen in the surf.  Those individuals most likely did not rely on pot luck for their catch but their ability to predict the window of excellent conditions that resulted in their success.

Wind and its direction and velocity are most likely the key elements.  When fishing the surf, it is most desirable to have a flat surf which results from a light northerly wind or light southeast breeze.

When those ideal conditions arrive, seagulls, pelicans and other seabirds will be seen just beyond the wading areas working schools of jack crevalle, sharks and other predators chasing mullet and other bait.

So, how does the average angler predict the arrival of such conditions?  The first thing is to watch the forecasts.  Following periods of strong southerly or easterly winds, there is usually an event that changes things.  A mild cold front is one of the best.

When that occurs, the beachfront and surf are usually calm for a short time.  Once the calm waters set in, it does not take long for the water to clear.

Now, when all of this comes together and presents that window of golden opportunity, how is the best way to take advantage of it?

Wade fishing is the best option and the baits of choice are determined by whether your preference is natural (live) or artificial baits.

Popping corks baited with live shrimp are probably the most popular and productive way of fishing the calm, May surf.

Anglers often choose artificial baits due to the ease and convenience of not dealing with a live bait well hooked onto one’s waders and the need to keep the bait alive.

Soft plastics and spoons, both silver and gold, are likely the most popular of the artificial baits.

The choice is up to the angler and is usually based on individual preference and past success with a particular type of bait.

Watch for those windows of excellent conditions and also be alert when in the water to keep your distance from schools of jumping mullet.  Often those mullet are a sign of sharks feeding and a time when some of the rare shark bites occur along the upper Texas Coast.

June is the beginning of active surf fishing along the upper Texas Coast.

The beachfront from High Island to Surfside is filled on days when conditions are right with anglers with lines in the water.  Many wade-fish the first through third sand bars while others use their kayaks and most recently bait launchers to go after that big fish.

Anglers, especially newcomers to the Galveston Bay complex, often ask for tips on how and when to surf fish and what equipment to use.  Hopefully we can shed some light on this and contribute to a successful surf fishing trip for you this summer.

Fish are found in the surf year round and the species vary in size and numbers with each season that passes.  June through November and often well into December is the most active time.

During the summer months, speckled trout will roam the surf and experienced anglers know when and where to target this popular game fish.  Wind and water clarity are two of the key components to a successful trip, with tidal flow being of equal prominence.

My experience has shown that July and August are the best months for catching specks in the surf.  Days where light winds prevail and good tidal movement and water clarity all come together are almost a given for catching a nice stringer of specks.
The best time to hit the surf is just before daybreak or at dusk.  An incoming tide is the best and when the specks are running, other fish will be as well.

Live shrimp fished under a popping cork likely is the most popular bait; however, small finfish like croaker work equally well if not better at times.  Artificial baits tossed by experienced fishermen catch their share of fish too.

Choosing your days is a big part of having success.  If there is a strong wind from a southerly direction, the surf is usually choppy and the water off color for fishing.  When the wind velocities drop to less than 10 knots, it is time to hit the surf.

So, what else besides specks can be expected during the summer?  The answer is lots of other fish.  Spanish mackerel and reds like the same terrain and during the peak of summer, just about any of the offshore species might come visiting.  Sharks are prevalent in the surf during warm weather.  Tarpon often are hooked by trout fishermen who have a live finfish dangling from a popping cork along one of the deep guts.

After Labor Day, specks are usually headed back into the bays for their fall transition.  Another transition hits the surf at the same time and that is the arrival of spawning reds, especially bull reds.  September through early December is a time when reds are just about a given along the beachfront.

The bull red run, as it is often called, takes place from late September through November and along with the big bulls are good numbers of sizable sharks like bull shark, blacktips and others.  Jack crevalle love the same stretch of beach and along with sharks, bull reds, tarpon and others can be found from one to 12 miles out.

Tarpon Alley is a mythical term coined by Capt. Mike Williams of Tarpon Express Guide Service.  Williams designated the area from just off of the beachfront to approximately 12 miles out as Tarpon Alley, as that is where he has found countless tarpon, sharks and other pelagic  fish roaming for many years.

The alley extends from near High Island to the middle Texas Coast.

With live shrimp and small fin fish being the bait of choice for trout, what about the bigger fish?

Large fresh ribbon fish and shad along with live bait such as mullet are excellent for going after the big ones. Hunks of bonito are one of the best shark baits.

Keep in mind that conditions need to be good to enhance your chances at catching fish.  Green, clear water along with light to calm winds are the best.  Water clarity is probably the most important of the group.

One thing to keep in mind, if you wade fish the surf be sure to have an extra-long fish stringer as sharks often mutilate stringers of fish and in the past have taken a swat at an unprotected leg. Stingrays also pose a problem during warm weather and that necessitates careful movement or ray guards over your ankles and calves.

While the first part of the year tends to be slow in the surf, during times of calm conditions in January through March, whiting provide a lot of entertainment and good table fare.  Whiting are easy to catch and one of the best baits is fresh dead shrimp with the cartilage peeled.