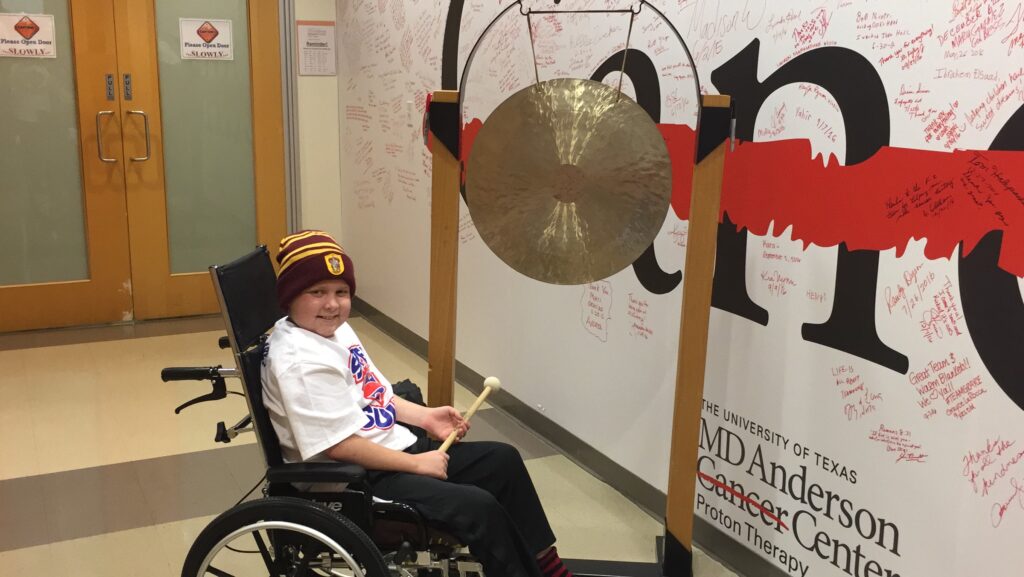 Sullivan Butler in his “Super Sully” shirt ringing the bell after doctors confirmed he was cancer free in 2017. 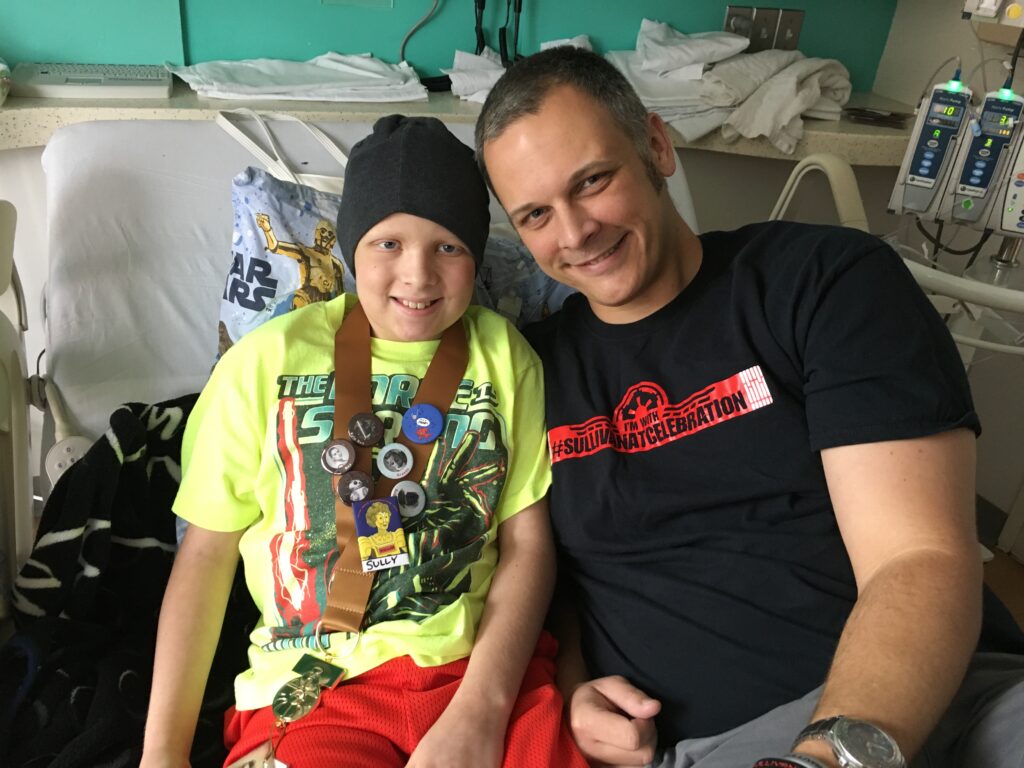 Sullivan and his dad, Dan, in the hospital during his treatment.

Talking to League City Intermediate seventh-grader Sullivan Butler, he appears to be just a normal 13-year-old boy who loves researching snakes, filling his house with his Lego creations and messing around with his two younger brothers.

But underneath this boyish exterior is the mark of a fighter who has overcome more than most will in a lifetime.

Back in 2016, Sullivan began complaining about back pain. His parents and his pediatrician chalked it up to him just being an active 10-year-old when preliminary tests came back negative. However, the pain quickly progressed over the next few weeks.

“It got to the point where nothing, including medicine, would help relieve the pain except taking warm baths,” Sullivan said. “Those few nights were horrible. I would get 15 minutes of sleep before the pain in my back would wake me up and I would have to go get in the bath.”

His parents, Dan and Jen, decided to take him to the emergency room to hopefully get answers as to why their son’s symptoms were quickly deteriorating each day, which included a severe headache that started in the waiting room. Little did they know that this hospital visit would change their lives forever.

“They did a CT scan on my head and found a golf-ball-sized tumor on my brain,” Sullivan said. “It had metastasized down my spine, which is what caused the pain in my back, and was now putting pressure on my brain because it kept growing.”

Sullivan was rushed to Texas Children’s Hospital in Houston where he would undergo brain surgery less than one day after the tumor was found.

“A surgical team typically spends several days reviewing scans and conferring to create detailed plans for surgery,” said Dan Butler, Sullivan’s dad. “Medicine is about managing risk, and there are few things riskier than cutting into a child’s brain. But the unrelenting pressure on his brain had turned into a race against the clock, so the surgeons would have to go in and do the best they could with the information they had. Sullivan needed surgery, quickly, or he wouldn’t survive another day,” he said.

Doctors would confirm that Sullivan was diagnosed with medulloblastoma. He would join the ranks of more than 300,000 families around the world who are fighting pediatric cancer, which is also considered the leading cause of death among children in the United States. 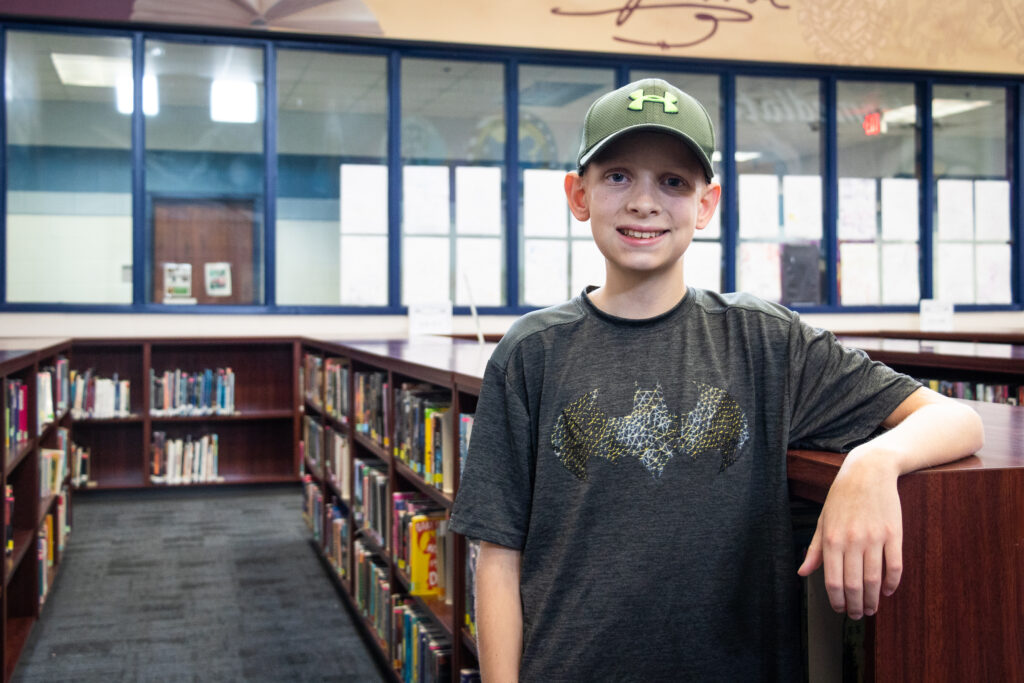 Sullivan today posing in the library at League City Intermediate.

“I wish I could describe some slow realization that occurred here,” said Dan. “There is no history of childhood cancer in our family and Sullivan had no previous health problems. Sometimes in the trillions of processes our cells carry out each day, something just goes wrong. Pediatric cancer strikes without compunction or consideration for health, wealth, age, sex, race, or any other factors that we use to distance ourselves from catastrophic events,” he said.

After surgery, it became clear that something was wrong. Sullivan complained of double vision, his speech was halted, and he lost use of both of his legs. These symptoms were a result of a surgical injury called Posterior Fossa Syndrome, which occurs in one of three children with medulloblastoma.

Over the next several weeks, a few of Sullivan’s symptoms improved as he was recovering from surgery. This is when his parents had to make the tough decision to tell him the truth about his diagnosis.

“My parents told me what the doctors had found, and they ended up having to tell me twice because I forgot about the first time because of all of the medicine they had me on,” Sullivan said. “So, I had to experience it twice. The only word I have to describe it was shock.”

Doctors sat down with Dan and Jen to then deliver their cancer and treatment plan. Overall, this would result in five surgeries, 30 rounds of radiation and four rounds of high-dose, in-patient chemotherapy. Sullivan would receive the highest amount of radiation and chemotherapy that could be given to children.

“It was another harsh lesson in pediatric cancer treatment,” Dan said. “Three weeks prior I had to fight with the radiologists at the ER to get a CT scan because they didn’t want to expose him to radiation. Now, doctors were going to fire 10 million times that amount into his brain.”

Some of the doctors also told his parents that they did not believe Sullivan would ever walk again on his own due to the surgical injury. Sullivan, however, slowly began to defy the odds.

“They didn’t think I would walk again, but I proved them all wrong,” Sullivan said. “A lot of people have said it was just my determination to walk again. But I wasn’t going to take ‘no’ for an answer.”

With the help of family, who he says were his biggest cheerleaders, and his physical therapists, he did indeed prove everyone wrong. Almost three years after that initial hospital visit, Sullivan is now cancer free and walking the halls of his intermediate school with his seventh-grade peers. He says he is proud of all that he has overcome.

“I definitely matured a lot,” Sullivan said. “I feel like going through this made me a better person.”

Looking towards his future, Sullivan still has hurdles to conquer as a result of his diagnosis, but he is determined to never stop fighting and not let anything hold him back from what he likes to do. This includes exploring his passion for cooking both at home and in his culinary arts class at school.

“Sullivan has never let his health stand in the way of participating in class,” said his culinary arts teacher, Amanda Pankratz. “If anything, I think that Sullivan’s previous health challenges have helped him find and manage the strength to conquer it all. I think he enjoys Culinary Arts so much because he holds passion. Crossing paths with him by being a part of my class this year has been one of my greatest blessings.”

September is Childhood Cancer Awareness Month which is recognized by childhood cancer organizations around the world to increase awareness and raise funds for kids like Sullivan. He states that helping to fund research for childhood cancers is important so as many kids as possible can get the treatment they need to survive.

“My advice for kids in similar situations is just take it one day at a time and never ever give up,” Sullivan said.

If you would like to learn more about pediatric brain cancer research and how you can help, please email dan.butler@medulloresearch.org.