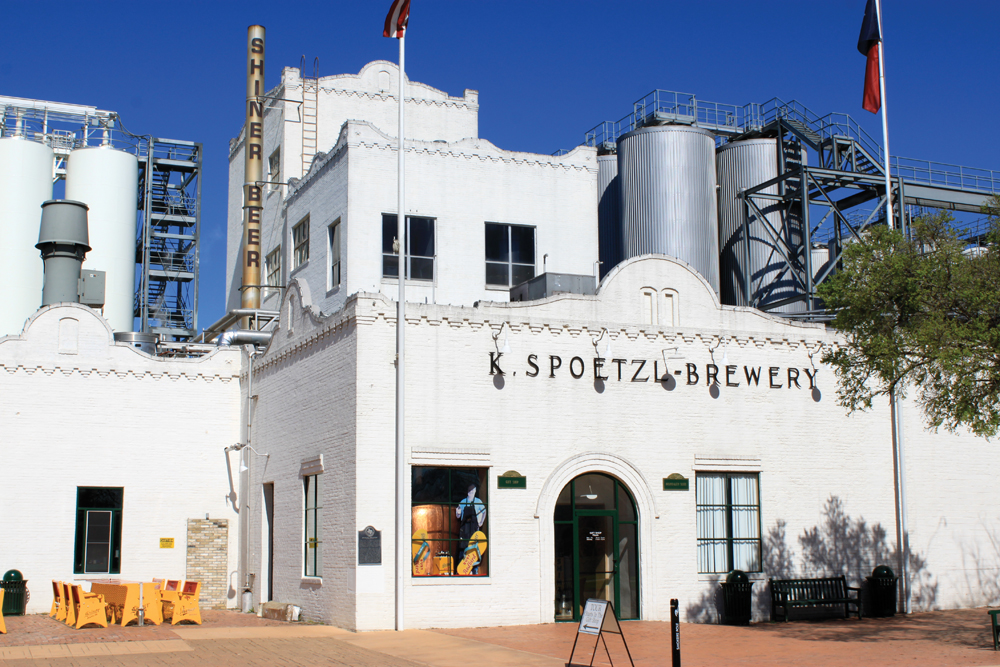 From the time we are very young, we experience juxtaposed sights, scents and touches that always remain in our minds and hearts as pairs.  I will forever couple that magnificent smell of cigars with sunny days with my dad at Wrigley Field.  Hearing a British accent always takes me back to that summer at Oxford and church always brings the thought of beer.  (What??  Yeah, you read that right.)

On our spring break trip a few weeks ago, after a couple of days at King Ranch, we headed north toward Flatonia.  We had spent this particular morning touring three more of the painted churches of Texas—one in Praha, one in Moulton and the last in Shiner.  After lunch at a fried chicken joint there in town we decided that, since we were in Shiner, why not hit the brewery?

Since it was an absolutely perfect day, while we waited for the next tour to begin, we sat outside at a picnic table and drank our four free beers in the sunshine.  I was enjoying a lemony brew that was new to me when it hit me—it was almost like being a kid again, this juxtaposition of church and beer.

Growing up Catholic, beer was a part of most church-related activities.  Sure, in the mass itself the priest used wine, but we were a poor working-class community so beer was the libation of choice.  Every Friday night my family would have fried fish at home and it was always clear to us as kids that this was for religious reasons.  As early as I can remember, my brother and I got a tiny glass of watered-down beer with our fish.  Church socials, especially potlucks, always featured beer.  And my favorite of all, the annual father and son trips to the Purdue-Notre Dame football game featured a bus full of coolers of beer.  While beer was always around, I was in my twenties before ever I saw someone drunk.  Beer was a part of life; overdoing it was not.  Still today, the smell of beer alone makes me think of church.

I sometimes wonder why these juxtapositions of seemingly unrelated, sometimes incompatible images are so important to us.  They stay with us long after the memory of events themselves seems to be gone.  Today, I don’t remember a single individual Cubs game, but I remember the cigar smell meant Wrigley Field.

Recently, at a restaurant with friends, someone brought up the song “Elusive Butterfly” by Bob Lind.  Inevitably, the question was asked, “When was that a hit?”  While the quick-on-the-draw cell phone expert in the group began to look it up on the Internet, I searched my memory for juxtapositions.  I had no other choice since I only have a flip phone.  (I don’t want a phone that is smarter than I am.)  Still I had a powerful tool at my disposal.  What could I connect the song to?  I remember having a discussion with my then-girlfriend about the fact that the song was unique because it had no rhyme.  We were outside in the snow.  Simple.  If there was snow, I knew it was winter and because of who I was with, it had to be my sophomore year in high school.  I announced the answer: winter of 65-66.  About two minutes later, our smart phone master informed us the song was released in December of 1965 and hit number five on the charts in January of ’66.  The entire group talked among themselves marveling at my fantastic memory, allowing me a chance to sneak a peek at the address on my driver’s license to refresh my memory on how to get home.
There is no question that these juxtapositions we have stored are powerful tools once we learn to use them.  But not all of us know how to do that.  Many of us, because of training or the job we hold, can look at something analytically.  We are very adept at breaking the whole down into its component parts.  We can even analyze how those parts interact.  But how many of us can go in the other direction, that is, to look at the object as a part of a larger system and then study how it interacts with other things in the world to form a whole?  Even those of us who can do this as part of our jobs seldom transfer this skill to everyday life.

And yet, that is a critical skill. We need to be able to see these subtle connections.  As humans, we tend to view the world in dichotomies.  We need to do that to really understand life around us.  Think about all the pairs we take for granted: work/play; healthy/sick; hot/cold.  Many of these are opposites and we see a scale running between the poles.  We measure things by their position on that scale.  Other dichotomies are less clear.  We see the pair of love as hate, yet they are not opposites, but rather two sides of the same coin, a strong emotional attachment. (The opposite of love is indifference.)  And sometimes, part of the dichotomy is invisible.  According to Aristotle, this is the case with happiness/unhappiness.  He says happiness is like air.  We are only aware of it in its absence.  Perhaps it is these difficult juxtapositions that make us less willing to rely on them in our daily lives.  If it is too much like work, I’d rather not do it.

Some juxtapositions just jump out at you when you least expect them, like beer and church did for me in Shiner.  Others, like Elusive Butterfly, are more subtle; you have to work for them.  But it seems to me, they are such powerful tools that it is worth the search.  I am always amazed at the power they bring.

For the next few weeks, every time I thought of something in my past, I looked for its pair.  That has opened up a surprisingly rich collection of memories and new ideas that I never would have been able to enjoy otherwise.   Some have lain dormant for years—like the way beetles remind me of the day my best friend and I went to school wearing long underwear and gym shorts.  But that’s a story for another day.