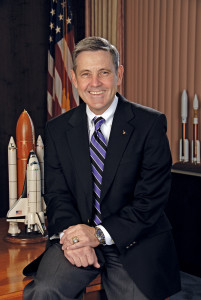 Col. Robert D. Cabana, director of the Kennedy Space Center and former NASA astronaut has been selected by the Rotary National Award for Space Achievement Foundation as the 2015 recipient of the National Space Trophy.

The presentation will be made Friday evening, April 24 at the Hyatt Regency Hotel in Downtown Houston during the annual RNASA Space Awards Gala, to which the public and aerospace community is invited.

Rodolfo González, president of the RNASA Foundation said, “The Foundation is overwhelmed with the number of nominators that came forward with a submittal for Colonel Cabana. We are pleased the board of advisors’ selected him, and look forward to honoring him at the 2015 Gala.”

Cabana, who was deputy director of the Johnson Space Center before assuming the top post at KSC, was nominated by JSC Director Dr. Ellen Ochoa, former JSC Director Michael L. Coats and Dr. Michael D. Griffin, former NASA administrator, and chairman and CEO of the Schafer Corp., “for his exceptional leadership and executive guidance in leading the evolution of NASA’s Kennedy Space Center as the world’s premier multiuser spaceport in support of NASA’s exploration goals.”

John Zarrella said, “I have known Bob for decades while I was covering the U.S. Space Program for CNN. During those years it became very evident, very quickly that no one cared more about the successes of the program. No one hurt more over the failures. And no one had greater hope about the future.” And Elliot Holokauahi Pulham, CEO of Space Foundation said “I can think of no one more deserving of the 2015 National Space Trophy than Bob Cabana.”

“I am extremely honored,” Cabana said, “to be receiving the National Space Trophy. The previous awardees are my heroes, and it means so much to me that the board considered me worthy to be among them.”

The retired Marine colonel is currently serving as the10th director of Kennedy Space Center, which is the primary U.S. launch site that has been used for every NASA human space flight since 1968. In this role, Colonel Cabana manages all NASA facilities and activities at Kennedy Space Center, leading a team of dedicated civil service and contractor personnel who operate and support numerous space programs and projects.

He has been instrumental in ensuring the successful transition from the Space Shuttle and establishing KSC as a true multiuser spaceport of the future.

Cabana was inducted into the Astronaut Hall of Fame in 2008. He is the recipient of The Daughters of the American Revolution Award for the top Marine to complete naval flight training in 1976, is a Distinguished Graduate of the U.S. Naval Test Pilot School, and has logged over 7,000 hours in 50 different kinds of aircraft.

The Minneapolis, Minn., native is a Fellow in the Society of Experimental Test Pilots, an Associate Fellow in the AIAA, and he has received numerous awards and decorations, including the De La Vaulx medal by the Federation Aeronautique Internationale in 1994, the Presidential Distinguished Rank Award, and most recently was honored with the National Space Club 2013 Dr. Kurt H. Debus Award.

Use www.rnasa.org/tables.html to reserve a table for the gala, and for information about sponsorships and tickets.  To reserve a hotel room, use www.rnasa.org/houston.html at the Houston Hyatt Regency. The telephone number is 713-654-1234, ask for Reservations, and request the RNASA group rate.  The RNASA website is www.rnasa.org