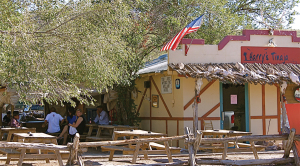 The shady seating at Harry’s Tinaja in downtown Alpine.

After a long day at the ranch, we were sitting outside at Harry’s Tinaja in downtown Alpine.  Harry’s is a bar with a small, rustic outdoor courtyard under the trees and since it was a truly magnificent west Texas autumn day, I wasn’t ready to be indoors.  This was the perfect spot.

I was visiting a friend who is an outstanding cowboy poet and a real 21st century philosopher.  Like most artsy types, he needs a day job to pay the bills.  For him, that means ranching.  He owns a section of land north and west of town and he and his ranch hands had been working cattle all day.  They spent the better part of it on horseback doing a variety of jobs as the need arose.  I followed along watching, trying to get some sense of what ranch life was like.

I was particularly fascinated by one of his cowboys who seemed to be the very best at everything he did, and yet, on this beautiful October day, in this magnificent place, he was just plain grouchy.  He seemed to really hate every aspect of his job.  As we nursed our beers, I asked my friend about the cowhand and why he seemed so unhappy.  The answer sent me off on a whirlwind of soul-searching that still haunts me today.

My friend told me that this man was born and raised right there in Alpine.  He had spent more than 20 years, all of his adult life, as a ranch hand.  He was well paid, had a nice house on a mountaintop and a beautiful wife and two kids—and he hated his life.  My friend said he had once overheard the man telling the other ranch hands that he was sick of the life he led.  He claimed one leg was shorter than the other from 40 years of first playing—then working—the mountainside.  All he wanted was to go somewhere where the ground was flat and where he’d never have to look at another cow or horse again.

Of course, being a city boy by birth and a resident of college towns and suburbs since turning 18, I didn’t understand how anyone could tire of a place this beautiful, and I said so.  My friend, ever the philosopher, had an answer.

“Some are born to the mountains but will never be mountain men.  And then there are lots of city people who are doing the mountains a grave injustice by not being here.  That’s you.”

My immediate response to his explanation was to take it as a compliment—like he was saying I was a natural.  I said, “Thank you.”

I thought about it for a second, considered elaborating, but quickly suspected I was missing something.  In an attempt to avoid embarrassing myself further, I said nothing, and the subject was never brought up again.

That was almost a year ago and since then, my thoughts have been all over the board on that conversation.  I thought for a while that maybe it was a reprimand, an accusation that I was somehow letting someone, or something, down because I chose to live somewhere based on how much money I could make there.  But then I decided that couldn’t be right. This man is one of the sweetest souls I have ever met.  I can’t imagine him attacking someone, even in such an understated way.  And yet, his response clearly indicated he didn’t intend it as a compliment.  What did it mean? 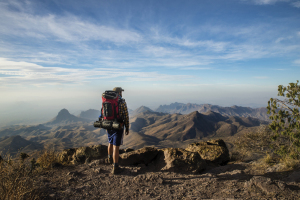 A hiker overlooks the terrain at Big Bend National Park.

In trying to understand it, I went back and looked at many of the things I have said and written over the years on the topic of choosing the right place to live.  In the last five years I’ve talked about picking a place where the spirit can be free to function at its highest level.  I’ve also argued that we should choose a place where our creativity is unleashed—and again, where we can do great things with minimal effort.  In re-reading those old essays, I noticed that all these ideas about choosing a home had one common thread: they were self-centered.  I was arguing that we should pick our spot on the planet based on what is best for us as individuals.  But here, staring me in the face was a very different perspective. Maybe I have responsibilities beyond myself.

Of course, we all understand that idea on one level.  We have responsibilities to our families to provide a good, safe environment, an adequate income and an opportunity for happiness.  Clearly we understand it is not always all about us.  But in my friend’s words, there was something different.  Maybe that responsibility extends beyond taking care of our loved ones—perhaps far beyond.

I have always been aware of the comfort I feel when I’m in the Big Bend area.  Sure, every Texan loves the national park, but my comfort extends to Marathon, Study Butte, and especially, to Terlingua.  I go there as often as I can, and it is never often enough.  I make every one of those trips for me—because it feels good.
Now, months later, I’m starting to think my cowboy friend might have been saying that in return for all I’ve gained, I have a responsibility to those mountains, to the Big Bend area, and that up to this point in my life, I have been shirking that obligation.

Is that possible?  Can we have an obligation to a place where we don’t even live?  It may be arrogant, but I have always thought I did my part in supporting all the communities I have lived in over the years.  I volunteered for civic projects, served on various city boards, and even chaired a few committees.  But now I was hearing that I might have an unfulfilled obligation to another place. I struggle with this.  It seems very conceited to think that the mountains suffer because they lack my presence.  They’ll be just fine many centuries after I am gone.  And surely, we have to go where we can make a living, don’t we?

But philosophers and poets are strange birds.  Maybe in their view there are things more important than a job or a career.

Sometimes, I wonder if we just think too much!