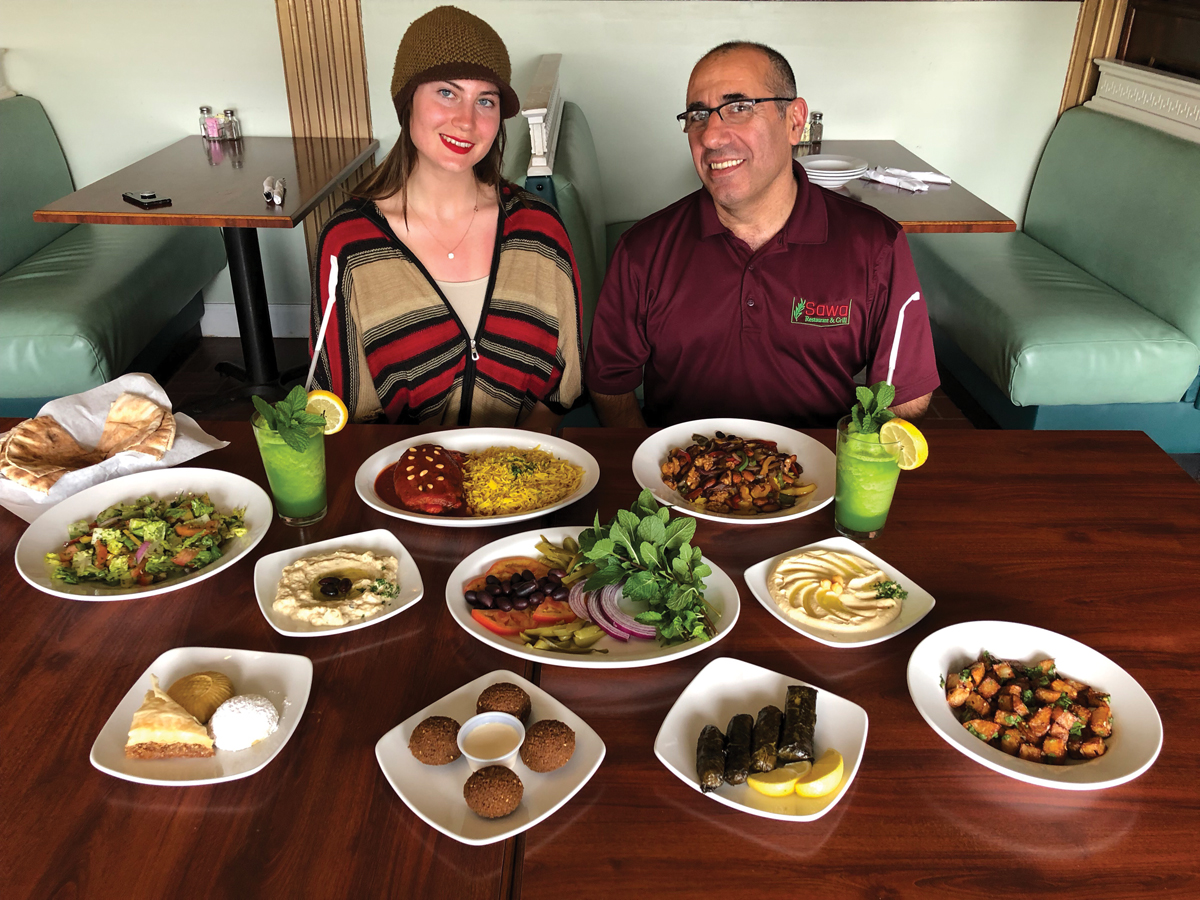 Sawa Restaurant & Grill is an international blend of the most authentic Mediterranean cuisine. This establishment is a proud, cultural, independent restaurant family-owned by Abdul Ghonym. The word Sawa means “Equal,” and “Together.” People join together at Sawa Restaurant & Grill to share memories and fresh, delectable cuisine. “I fell in love with Clear Lake because of NASA and the thriving community. I love Clear Lake for its diversity and the expanding market for healthy food and international flavor.” says Abdul.

The food to table is fast and the flavors are tantalizing. Each meal is served with a hot cup of mint or sage tea, depending on the season. All dishes are prepared with the highest quality. For starters try the delicious hand-chopped salads. The Lentil Soup is perfectly spiced, the Hummus is rich and creamy, the Baba Ghannouj is mild and smoky, the Falafel is cooked to perfection, and the fresh baked Baklava is simply delightful. Make sure to try the authentic Ma’amoul cookies that utilize the fresh nuts and fruits of the land. Olive Oil, the main ingredient in Mediterranean cuisine, is imported from the West Bank at Abdul’s family-owned farm. For the finale enjoy a refreshing Mint Lemonade Smoothie. The vegan Ciku Stir Fry contains almonds, walnuts, and raisins on a bed of rice served with onions, bell peppers, and aromatic spices. The Mnazali is a savory mix of onions, garbanzo beans, tomatoes, and layers of eggplant doused in delicious spices.

Come to Sawa Restaurant & Grill for excellent healthy and vegan cuisine, reasonable prices, and staff that treats you like family. Sawa allows you to experience Middle Eastern culture at its finest. “I love when people smile because they like what I prepared for them. Our cuisine is full of choices because it is made from authentic mediterranean ingredients the land has given us. I cater to a community for better and healthier living.” States Abdul. For customer preference each entree is properly marked dairy free, gluten free, or vegan. Sawa Restaurant & Grill serves universities, hospitals, doctors offices, and fitness centers. All NASA and aerospace contract workers receive a 15 percent discount, so for a real authentic mediterranean treat, try Sawa Restaurant & Grill located at 16608 El Camino Real Houston, TX 77062. Look forward to new additions on their menu and a whole new experience of Mediterranean cuisine. Order to go at 281-990-0817 or visit their website at www.sawarestaurantgrilltx.com

Having been open now for just a couple of months, Blue Palms Bar & Grill is already impressing locals with its exclusive menu selections, quality ingredients, and outstanding service. They are quickly making a name for themselves as an excellent eatery addition to the community, sure to succeed.

David and Cindy Burington, owners of the new dine-in restaurant and cocktail bar, opened their business on Jan. 9. David Burington has an extensive background working in Italian food restaurants, mainly. “I worked as a line cook, a prep cook, became a supervisor, then a general manager, then a kitchen manager, and also as a chef,” Burington says. “I even had some training in Italy.”

Despite his brother’s encouragement to open an Italian food place of his own, Burington other plans. “I didn’t want to do that,” says Burington. “I wanted to do something different—I wanted to have a place with a great menu and lots of variety; always creating new items and specials.” Serving instead cuisine coined “modern American,” Blue Palms Bar and Grill is exactly what Burington had envisioned.

“We didn’t want to get stuck as just a steak house or a seafood restaurant or an Italian place. We have such a great variety here.”

The Buringtons are excited to serve a selection of appetizers, entrees, and desserts, many of which done in ways that this area has never seen before. Moreover, Burington guarantees 100 percent fresh ingredients with “nothing frozen, and always very high quality.” Unlike many other restaurants, Burington says that everything on the menu is made in house. “Everything is home made,” Burington says. “If we can physically make it, we’re making it.”

As for the seafood and the meats, Burington says he has only a select list of approved suppliers that he will work with to ensure quality. “Unlike a lot of restaurants, we get deliveries 6 days a week,” says Burington. He explains that because everything is fresh, they know where it’s coming from, and they are certain of the high quality, they never have to worry about buying extra to make sure its good. They don’t worry about waste because they do everything in house. “We’ll get a delivery in, sell it, and then have the next delivery to replace it,” says Burington. “We don’t have to worry about food sitting in the freezer going bad or getting freezer burn.”

Though Burington acknowledges that there seems to be a “pretty good mix” of dishes that are ordered most often, he highlights a few favorites that receive a plethora of positive feedback. Some of the appetizers: The Southern Ceviche, one of Burington’s recipes made with citrus cured gulf seafood and served with lavosh crackers, as well as the Short Rib Raviolis, made with homemade pasta and stuffed with Shiner Bock braised beef, wild mushrooms, spring onions and black pepper cream, and the Crab Cakes which are likely to become the new people’s choice in the area. Entrees that Burlington says “everyone always loves,” include a proprietary coulotte steak exclusive to Blue Palms, and a divine chicken roulade creation that Burlington says is a “simple dish, done very well.” Home made desserts like the house cheesecake with a European style, the Texas pecan Cobbler, and a delicious bread pudding topped with bits of candied bacon are hard to resist.

The Buringtons understand the importance of providing quality food and service, but it’s even better to be able to do that and keep prices affordable for most diners. Burington says, “Amazingly, even with the quality ingredients, preparation and care put into our menu, the prices are very reasonable. For what you’re getting, you won’t find better bang for your buck.”

Onward and upward, Blue Palms Bar and Grill is demonstrating a commendable distinction in dining here in the Bay Area. Proud of the success thus far and looking forward to continued growth, Burington’s outlook is deservedly optimistic: “We are in a great area, and I think if we keep doing a great job, more and more people will love coming here to dine. I am very happy.”