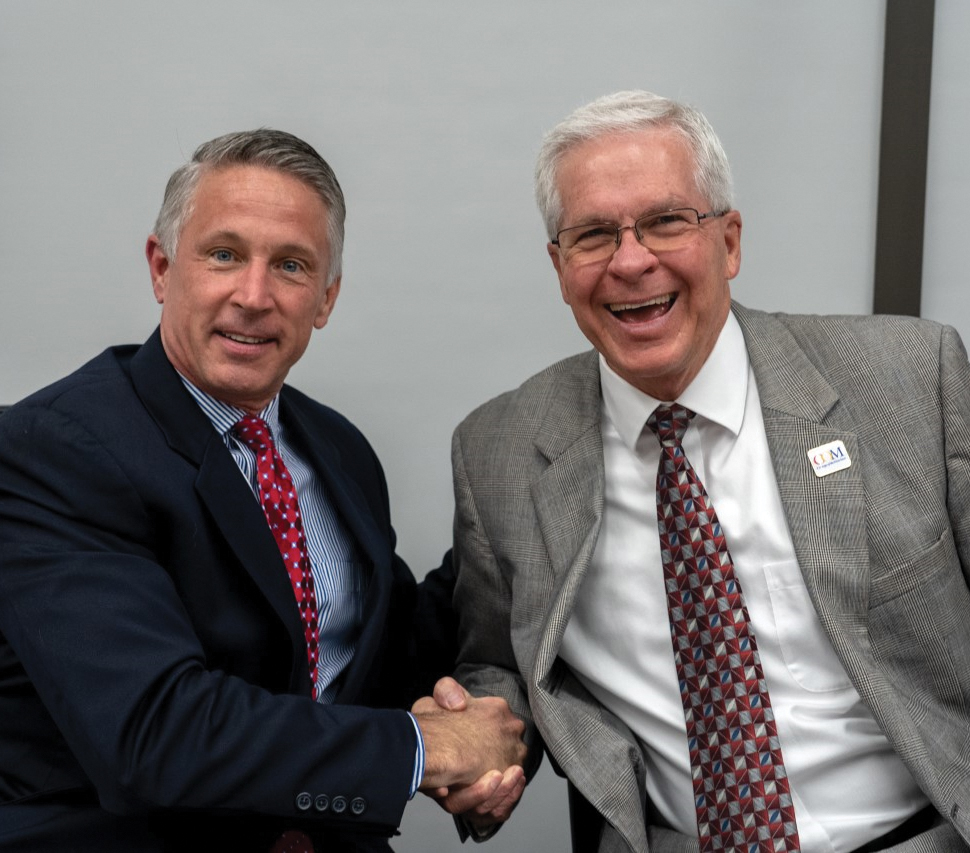 COM Board of Trustees Chairman Kyle Dickson, left, congratulates COM President Dr. Warren Nichols after the board approved a new contract for Nichols.

College of the Mainland President Dr. Warren Nichols has much to smile about these days.

After getting a 67 percent approval of the college’s fall bond referendum, the COM Board of Trustees unanimously approved a new contract for him.

Nichols, who became president of the Texas City community college in February 2017, had one year left on his three-year contract, but following the trustees’ vote, his new contract now extends through 2022 and provides for an automatic renewal on an annual basis unless terminated by either party.

“Under his leadership, Dr. Nichols is taking College of the Mainland to the next level. He has implemented initiatives aimed at student success, seen a rise in student growth and directed much needed maintenance projects on the campus,” COM Board of Trustees Chairman Kyle Dickson said.

Although not present for Monday’s meeting, Delgado, who served on the search committee that hired Nichols, said she agreed with the new contract.

“I support Dr. Nichols’ contract and thank him for the turnaround he has overseen at the college.  It has been everything I was hoping for,” she said.

After several failed bond referendums, Nichols was instrumental in meeting with community members and sharing the college’s goals and visions which led to the overwhelming approval of a $162.5 million bond package, Dickson said.

The landscape of the college is changing under Nichols’ direction.

With voters in the COM Taxing District approving the bond referendum in November, architects now are putting the final touches on plans for a new STEAM/Allied Health Building and a Student Success Center to replace the current Administration Building. Both buildings should be completed by January 2021 followed by the construction of a new Industrial Careers Building.

“I am excited to see COM grow and serve our community,” Nichols said. “More and more students and families are finding College of the Mainland to be an affordable option when obtaining a college degree or workforce certificate. With the construction of new buildings on campus, we will be able to offer even more options in career opportunities.”

Enrollment at COM continues to increase. For the Spring 2019 semester, more than 6,000 students – a record for COM – registered for classes.

With Nichols’ leadership, there has been a transformation as the college has become a beacon for the entire region when it comes to higher education, continuing education and just resonates “community.”

With an aging campus, Nichols oversaw a $16.2 million maintenance project to rebuild a chemistry lab, replace underground pipes and convert a closed natatorium into a state-of-the-art conference center that is available for community use. A complete renovation of the Student Center also is ongoing.

COM was highlighted at national conferences after it became the first Texas college or university to fully implement a successful corequisite program designed to help underprepared students complete required English and math classes. The success of corequisite has been outstanding. The college also is focused on a Guided Pathways to Success program to help students stay on track to complete their associate degree or workforce certificate.

In January, Nichols was a finalist for Citizen of the Year presented by the Texas City-La Marque Chamber of Commerce and has been honored with the Rising Star award given to emerging leaders.

The college, under Nichols, also continues to meet and improve upon its goals of Student Success, Employee Fulfillment and Exemplary Facilities.