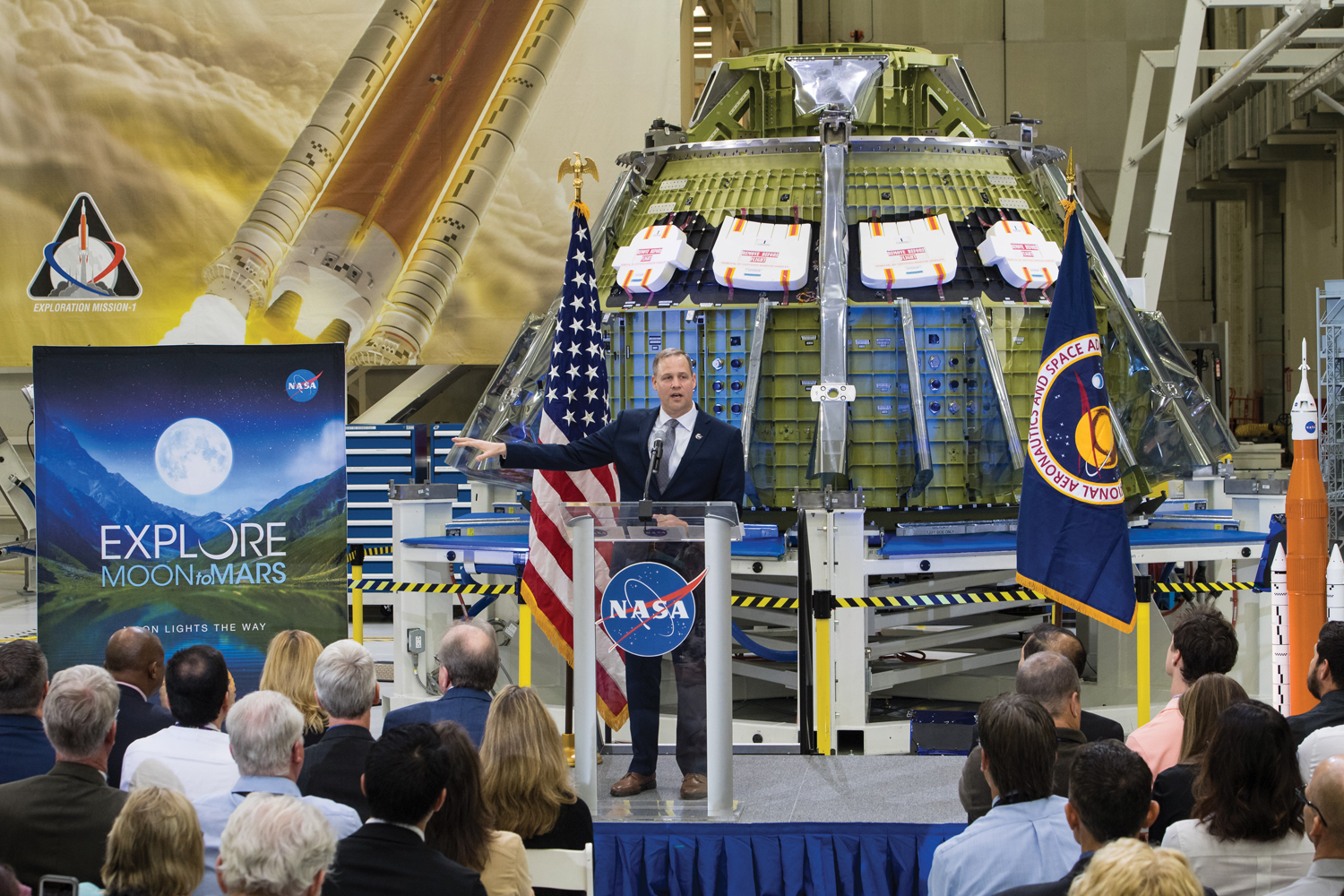 NASA Administrator Jim Bridenstine talks to employees about the agency’s progress toward sending astronauts to the Moon and on to Mars during a televised event, Monday, March 11, 2019, at the Neil Armstrong Operations and Checkout Building at NASA’s Kennedy Space Center in Florida. Photo: NASA

“As we approach the 50th anniversary of Apollo 11 this July, we are moving forward to the Moon and on to Mars, and we want the world to come with us.”

That was NASA Administrator Jim Bridenstine addressing NASA employees and the media on the space agency’s plans to send astronauts to the moon and eventually to Mars in the next few years.

And, Bridenstine said, astronauts will be on the moon within the next 10 years, and “when they visit, they will stay.”

Speaking at Kennedy Space Center with his speech video taped to Johnson Space Center and other NASA centers for the public unveiling of America’s work on the Moon2Mars project, Bridenstine discussed President Trump’s $21 billion NASA budget, which he said was not only a six percent increase, but “one of the strongest on record for our storied agency” and a “huge vote of confidence for all of the agency’s hard work and dedication.”

SERIES OF MISSIONS
“Beginning with a series of small commercial delivery missions to the moon as early as this year, we will use new landers, robots and eventually humans by 2028 to conduct science across the entire lunar surface,” Bridenstine said as he discussed the Gateway project, following a welcome by JSC Director Mark Geyer.

“We will go to the Moon in the next decade with innovative, new technologies and systems to explore more locations across the lunar surface than ever before. This time, when we go to the Moon, we will stay. We will use what we learn as we move forward to the Moon to take the next giant leap – sending astronauts to Mars.

The NASA administrator added that “this budget will build on our successes in low-Earth orbit to create a sustainable exploration campaign that combines NASA’s expertise with that of our commercial and international partners.’ We will continue ushering in a new era of human spaceflight as we launch American astronauts on American rockets from American soil for the first time since 2011.”

OUR BACKBONE
The Space Launch System, Orion spacecraft, and Gateway will continue to be our backbone for deep space exploration, he said.

“With this budget, NASA’s critical work studying our home planet and the Sun will benefit humankind for generations. We will reveal the unknown with missions to Jupiter’s moon Europa and the launch of the James Webb Space Telescope. We will continue planning and developing the first round-trip mission to the Red Planet with Mars Sample Return.

“NASA is everywhere, and we are impacting people’s lives across the globe. As we celebrate the past, let’s inspire our friends and family for the future that we are building.”

Afterwards, JSC employees showed reporters all the hard work they have been putting in to accomplish the Moon2Mars goal.