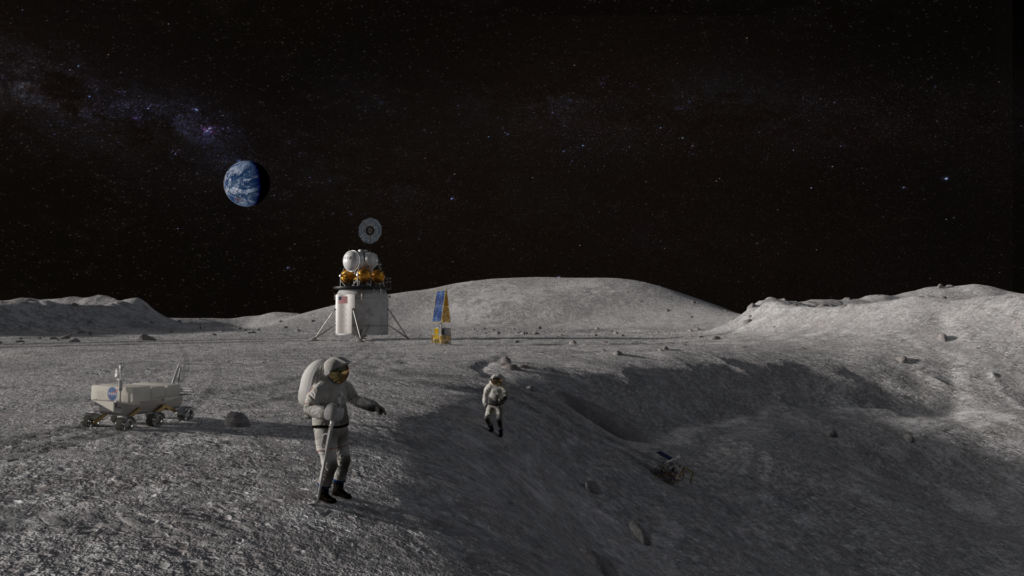 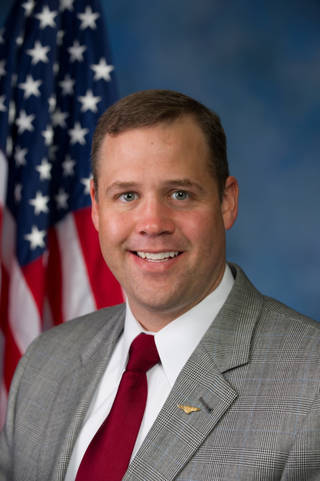 NASA has awarded Lockheed Martin a contract to build the Orion spacecraft for up to 12 lunar missions, with the work to be managed here at Johnson Space Center.

Value of the initial contract is $2.7 billion, NASA Administrator Jim Bridenstine said in announcing plans for as many as a dozen Artemis, or lunar, missions, including the mission that will carry the first woman and next man to the Moon by 2024.

“This contract secures Orion production through the next decade, demonstrating NASA’s commitment to establishing a sustainable presence at the Moon to bring back new knowledge and prepare for sending astronauts to Mars,” Bridenstine said. “Orion is a highly-capable, state-of-the-art spacecraft, designed specifically for deep space missions with astronauts, and an integral part of NASA’s infrastructure for Artemis missions and future exploration of the solar system.”

Spacecraft production for the Orion program will focus on reusability and building a sustainable presence on the lunar surface, he added.

“This is a great day for the men and women at Johnson Space Center. They are crucial to our national space program, and have an undeniable legacy and record of success in advancing America’s leadership in the human exploration of space,” said Sen. Ted Cruz of Texas.

“I am pleased that Administrator Bridenstine has heeded my calls and is taking significant steps to ensure that Johnson continues to grow with the exciting future of manned exploration that lies ahead. More needs to be done, and I look forward to production ramping up in the weeks and months to come and to more opportunities with NASA.”

The contract with Lockheed includes a commitment to order a minimum of six and a maximum of 12 Orion spacecraft, with an ordering period through Sept. 30, 2030. Production and operations of the spacecraft for six to 12 missions, NASA said, will establish a core set of capabilities, stabilize the production process, and demonstrate reusability of spacecraft components.

“This contract secures Orion production through the next decade, demonstrating NASA’s commitment to establishing a sustainable presence at the Moon to bring back new knowledge and prepare for sending astronauts to Mars,” Bridenstine said. “Orion is a highly-capable, state-of-the-art spacecraft, designed specifically for deep space missions with astronauts, and an integral part of NASA’s infrastructure for Artemis missions and future exploration of the solar system.” 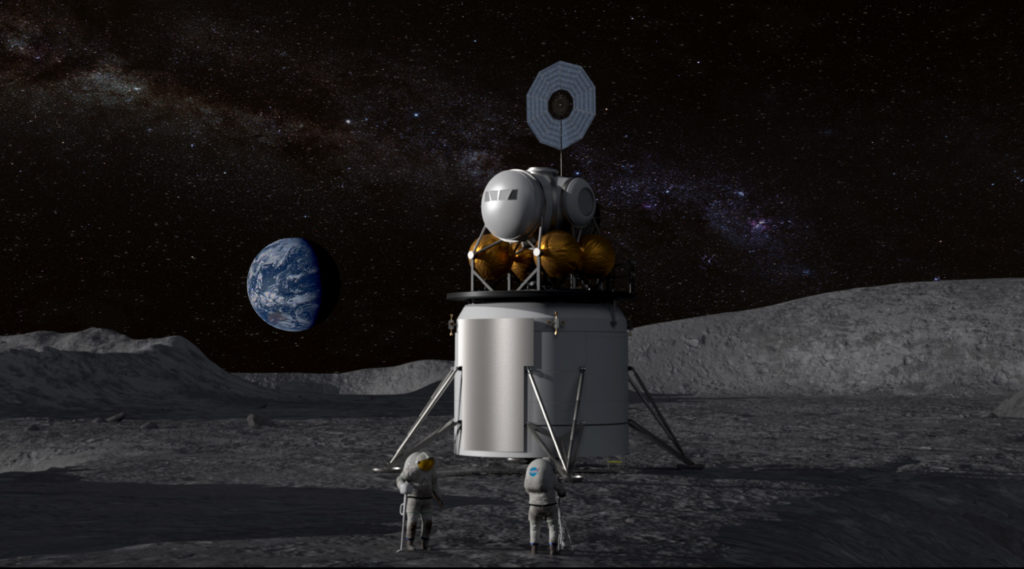 Illustration of a human landing system and crew on the lunar surface with Earth near the horizon. Credits: NASA

As NASA prepares to land humans on the Moon by 2024 with the Artemis program, commercial companies are developing new technologies, working toward space ventures of their own, and looking to NASA for assistance. NASA has selected 10 U.S. companies for 19 partnerships to mature industry-developed space technologies and help maintain American leadership in space.

NASA centers will partner with the companies, which range from small businesses with fewer than a dozen employees to large aerospace organizations, to provide expertise, facilities, hardware and software at no cost. The partnerships will advance the commercial space sector and help bring new capabilities to market that could benefit future NASA missions.

The selections were made through NASA’s Announcement of Collaboration Opportunity(ACO) released in October 2018. They will result in non-reimbursable Space Act Agreements between the companies and NASA. The selections cover the following technology focus areas, which are important to America’s Moon to Mars exploration approach.

Through ACO, NASA helps reduce the development cost of technologies and accelerate the infusion of emerging commercial capabilities into space missions. As the agency embarks on its next era of exploration, STMD is focused on advancing technologies and testing new capabilities for use at the Moon that also will be critical for crewed missions to Mars.

New Space Policy Directive calls for return to the moon 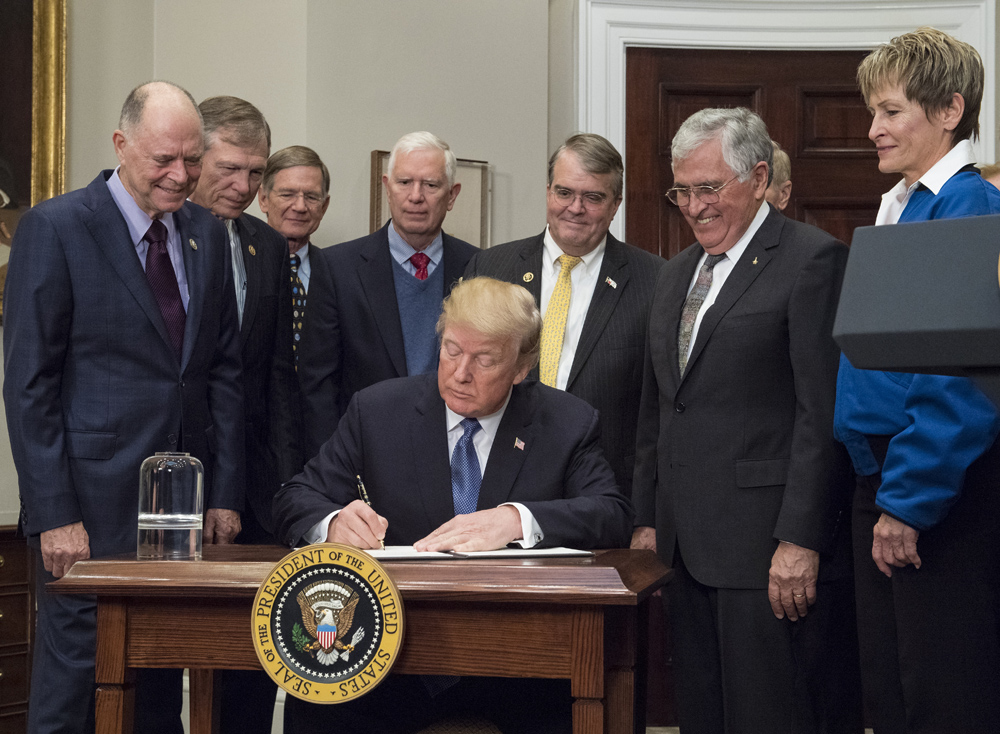 President Donald Trump signs the Presidential Space Directive – 1, directing NASA to return to the moon, alongside members of the Senate, Congress, NASA, and commercial space companies in the Roosevelt room of the White House in Washington, Monday, Dec. 11, 2017. Photo Credit: (NASA/Aubrey Gemignani)

President Donald Trump is sending astronauts back to the Moon.

The president Monday signed at the White House Space Policy Directive 1, a change in national space policy that provides for a U.S.-led, integrated program with private sector partners for a human return to the Moon, followed by missions to Mars and beyond.

The policy calls for the NASA administrator to “lead an innovative and sustainable program of exploration with commercial and international partners to enable human expansion across the solar system and to bring back to Earth new knowledge and opportunities.” The effort will more effectively organize government, private industry, and international efforts toward returning humans on the Moon, and will lay the foundation that will eventually enable human exploration of Mars.

“The directive I am signing today will refocus America’s space program on human exploration and discovery,” said President Trump. “It marks a first step in returning American astronauts to the Moon for the first time since 1972, for long-term exploration and use. This time, we will not only plant our flag and leave our footprints — we will establish a foundation for an eventual mission to Mars, and perhaps someday, to many worlds beyond.”

The policy grew from a unanimous recommendation by the new National Space Council, chaired by Vice President Mike Pence, after its first meeting Oct. 5. In addition to the direction to plan for human return to the Moon, the policy also ends NASA’s existing effort to send humans to an asteroid. The president revived the National Space Council in July to advise and help implement his space policy with exploration as a national priority.

“Under President Trump’s leadership, America will lead in space once again on all fronts,” said Vice President Pence. “As the President has said, space is the ‘next great American frontier’ – and it is our duty – and our destiny – to settle that frontier with American leadership, courage, and values. The signing of this new directive is yet another promise kept by President Trump.” 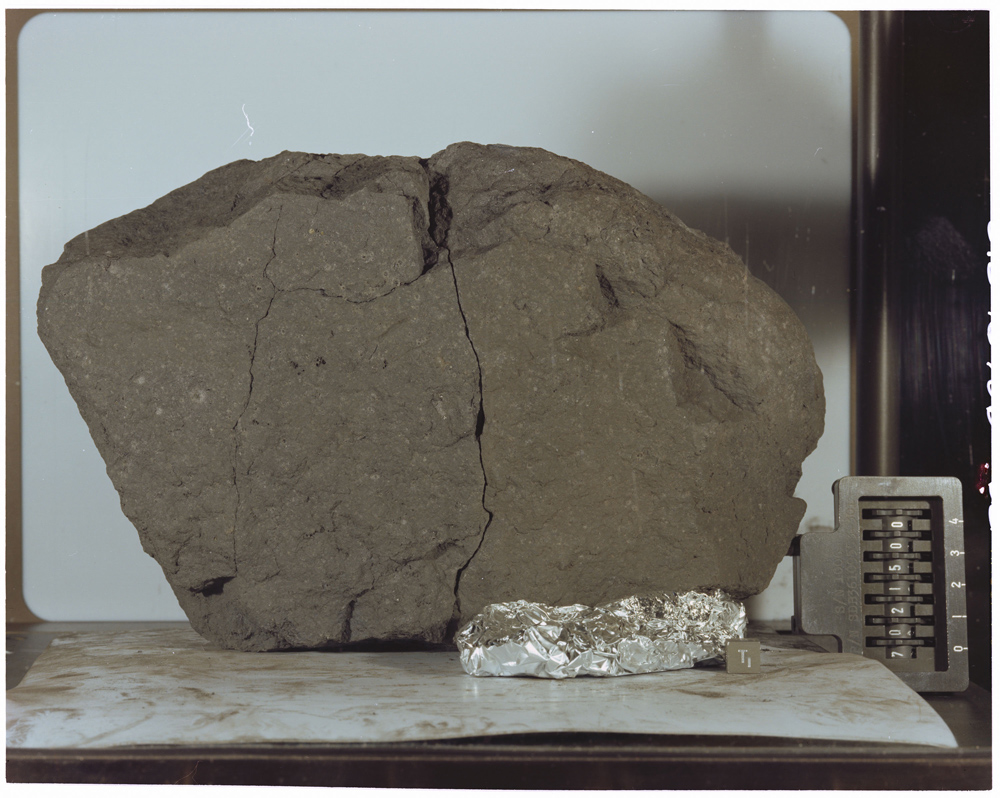 Lunar Sample 70215 was retrieved from the Moon’s surface and returned by NASA’s Apollo 17 crew. The sample is a basaltic lava rock similar to lava found in Hawaii. It crystallized 3.84 billion years ago when lava flowed from the Camelot Crater. Sliced off a parent rock that originally weighed 8,110 grams, the sample weighs 14 grams, and is very fine grained, dense and tough. Credits: NASA

Among other dignitaries on hand for the signing, were NASA astronauts Sen. Harrison “Jack” Schmitt, Buzz Aldrin, Peggy Whitson and Christina Koch. Schmitt landed on the moon 45 years to the minute that the policy directive was signed as part of NASA’s Apollo 17 mission, and is the most recent living person to have set foot on our lunar neighbor.

Aldrin was the second person to walk on the Moon during the Apollo 11 mission. Whitson spoke to the president from space in April aboard the International Space Station and while flying back home after breaking the record for most time in space by a U.S. astronaut in September. Koch is a member of NASA’s astronaut class of 2013.

Work toward the new directive will be reflected in NASA’s Fiscal Year 2019 budget request next year.

“NASA looks forward to supporting the president’s directive strategically aligning our work to return humans to the Moon, travel to Mars and opening the deeper solar system beyond,” said acting NASA Administrator Robert Lightfoot. “This work represents a national effort on many fronts, with America leading the way. We will engage the best and brightest across government and private industry and our partners across the world to reach new milestones in human achievement.

“Our workforce is committed to this effort, and even now we are developing a flexible deep space infrastructure to support a steady cadence of increasingly complex missions that strengthens American leadership in the boundless frontier of space. The next generation will dream even bigger and reach higher as we launch challenging new missions, and make new discoveries and technological breakthroughs on this dynamic path.”

A piece of Moon rock was brought to the White House as a reminder of the exploration history and American successes at the Moon on which the new policy will build. Lunar Sample 70215 was retrieved from the Moon’s surface and returned by Schmitt’s Apollo 17 crew. Apollo 17 was the last Apollo mission to land astronauts on the Moon and returned with the greatest amount of rock and soil samples for investigation.

The sample is a basaltic lava rock similar to lava found in Hawaii. It crystallized 3.84 billion years ago when lava flowed from the Camelot Crater. Sliced off a parent rock that originally weighed 8,110 grams, the sample weighs 14 grams, and is very fine grained, dense and tough.

During the six Apollo surface excursions from 1969 to 1972, astronauts collected 2,196 rock and soil samples weighting 842 pounds. Scientific studies help us learn about the geologic history of the Moon, as well as Earth. They help us understand the mineral and chemical resources available to support future lunar exploration.

For information about NASA’s missions, programs and activities, visit: https://www.nasa.gov