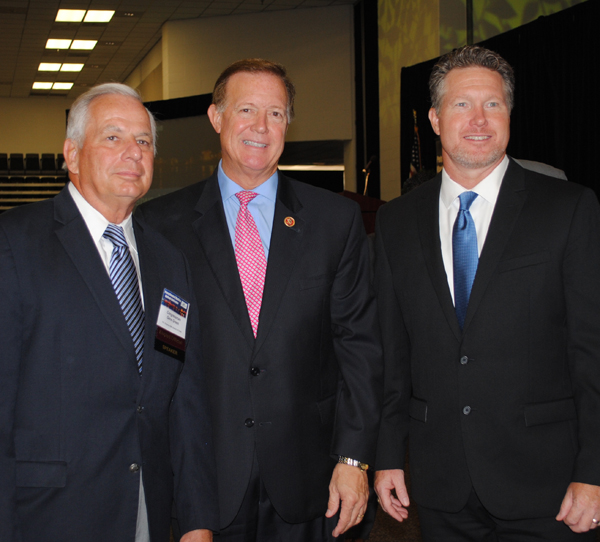 “It is an exciting time to be involved in international trade and business growth at the port. This year, we celebrate the fact that for a century the Houston Ship Channel has played a pivotal role in the economic health of our city and region,” Longoria said.

Todd Monette, chairman of East Harris County Manufacturers Association, provided an overview of national and global factors driving industry growth in the region. A Greater Houston Port Bureau economic study projects that the region can expect more than $35 billion in plant expansion in the next several years.

This expansion will generate thousands of jobs, including as many as 100,000 skilled construction jobs during the next three to five years, according to industry sources.

The executive vice president of Shell’s global manufacturing business, Lori Ryerkerk, highlighted how changes in supply and demand for advantaged feedstocks are shaping the U.S. and global refining and petrochemical business. Addressing the conference as a keynote speaker, Ryerkerk concluded, “I’m excited about the prospects for the refining and petrochemical future, both globally and here on the Gulf Coast.”

In addition to the Port of Houston and petrochemical leaders announcing continued growth for the region, logistics and transportation leaders told conference attendees that they are seeing growth in product movement via marine, truck, rail and pipeline shipments. They also are seeing great demand for qualified workers to fill the jobs.

“It is wonderful to hear the Port of Houston chairman announce that these are exciting times for the port and encouraging us to listen as a panel of petrochemical plant managers and industry leaders tell us that the energy renaissance and industry expansion could last more than 10 years,” said Leonard A. Bedell.

Bedell, who was one of the more than 650 attendees, is president and CEO of Mobil Steel, a founding sponsor of the Economic Alliance outlook conference.

“This positive message is very different from the first couple of years when we heard that local industry could not compete against global competition for new plant expansion,” he added.

The Economic Alliance Houston Port Region provides professional economic development services to 16 communities along the 25-mile Houston Ship Channel. Since the economic downturn in 2008, the Economic Alliance has supported more than 40 successful projects creating more than 4,400 new jobs and $5.5 billion of capital investment in the Houston Port Region. According to today’s economic forum, prospects are bright for future investment.