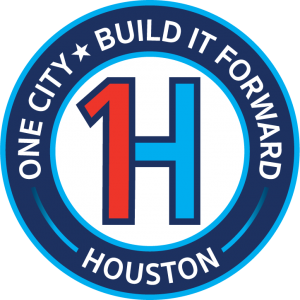 The City of Houston has taken a critical step forward with the opening of four Housing Resource Centers, one in each quadrant of the city, to use $1.17 billion in federal aid to assist Houstonians whose homes were damaged by Hurricane Harvey.

Anyone who may be eligible must first complete a survey:

Mobile outreach teams are also available to serve home-bound residents and others.

Mayor Sylvester Turner opened the Northeast center on Monday, encouraging community members to be ambassadors for the recovery effort to ensure that no eligible homeowner is left out.

The mayor told people in the packed room, “Our goal is to reach and serve as many of the affected homeowners as possible, especially those who are hardest to reach – our disadvantaged, senior citizens, those with limited English proficiency and those with special needs. We will not leave anyone behind.”

On the importance of taking the Harvey Recovery Survey, the mayor continued, “No one wants another delay in the process. The survey will help us understand each homeowner’s situation better and determine which program they may be eligible for.”

Tom McCasland, director of the City Housing and Community Development Department, emphasized that the city has moved quickly to ensure recovery was launched as soon as federal funds became available. McCasland said, “The contract for the money was signed on the 4 th , today is the 14 th – it’s 10 days later and we’re rolling out programs.”

The city will receive the $1.17 billion for housing recovery through the U.S. Department of Housing and Urban Development and the State of Texas General Land Office.

While priority will be given to low- and moderate-income homeowners, assistance is available to homeowners of all income levels. 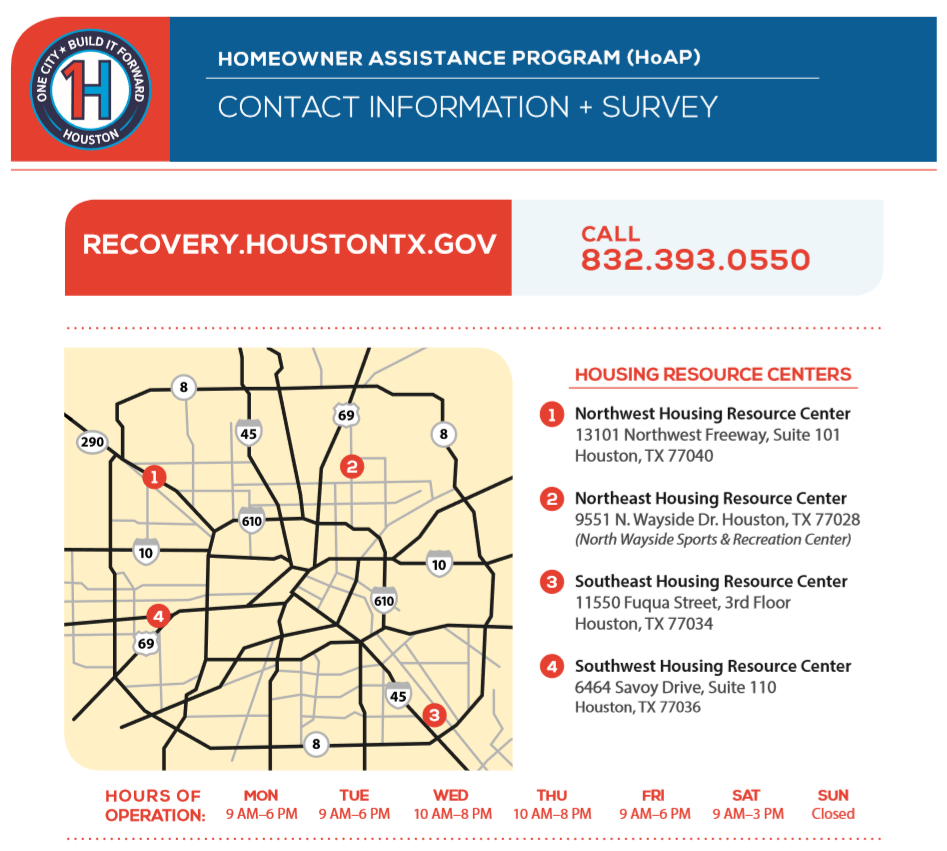 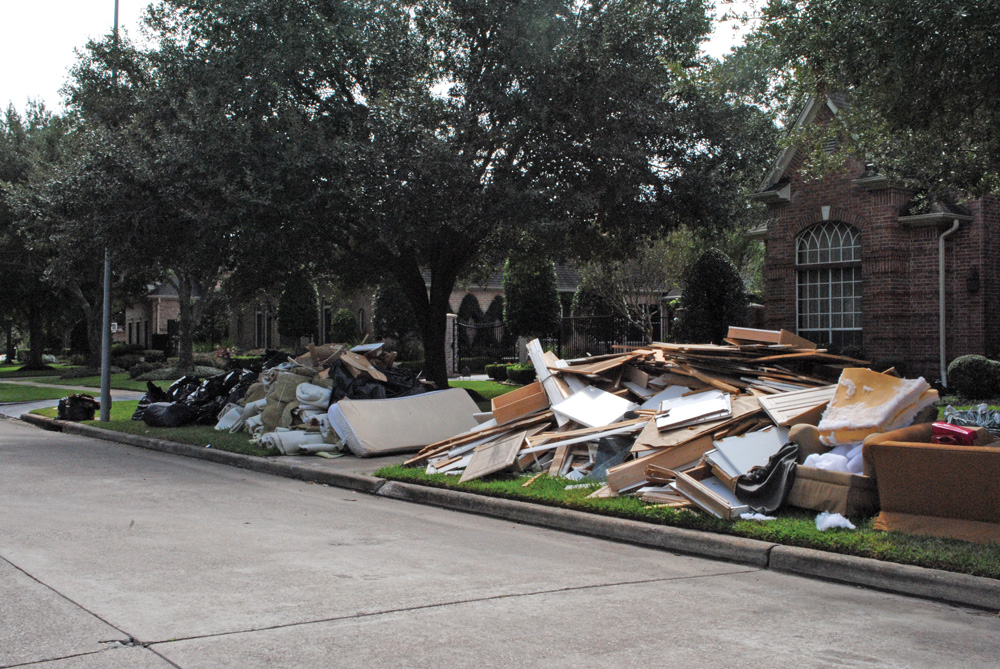 This was the scene along Almond Creek Drive as homeowners in Clear Lake’s Bay Oaks subdivision awaited pickup of their debri after flooding from the rains of Hurricane Harvey.

It will be awhile before we hear raindrops and don’t tense up after our lives were turned upside down by a hurricane named Harvey that couldn’t seem to make up his mind where to go next. And also managed to drop nearly 52 inches of rain and leave behind billions of dollars in damages.

While it may be months before exact figures are available, we do know that approximately 136,000 area homes were damaged – 113,000 in Harris County and about 23,000 in nearby Galveston County as many creeks and bayous filled to capacity and then began filling nearby homes and businesses. Two Bay Area mayors’ homes were among the victims.

Some cities were lucky. Others not so. Among the hardest hit were League City, Friendswood and Dickinson as Clear Creek spilled out of its banks and into homes, along with tons of rain. Please note: figures are best estimates.

Baytown
Baytown was another area city hard hit by Harvey with more than 4,000 homes flooded and about 1,000 of those families having to ask for help. Nearby, the $6 billion Chevron Phillips Chemical expansion has been delayed until next year after Harvey floodwaters created problems that will take a few months to resolve. Also, Exxon’s Baytown facility lost its roof due to the heavy rain – one of 10 refineries knocked offline by the storm.

Clear Lake City
An estimated 250 homes flooded in the Clear Lake City area according to Houston officials, who said homes in Bay Oaks, Bay Glen, Bay Pointe, Meadowgreen, Oakbrook West, Pine Brook, Middlebrook, Brook Forest, University Green, Sterling Knoll, Pipers Meadow and Northfork reported water damages – some with only an inch or two of water and some with a foot or so as Horsepen Bayou overflowed.

Meanwhile, Doug Peterson tells us, “With its first section excavation about 90 percent complete, Exploration Green worked like a champ, gathering and detaining about one million gallons of water, and then slowly releasing it long after the rain stopped. It’s estimated that between 150 and 200 homes avoided flooding because of Exploration Green, and up to 2,000 will be protected from flooding when the project dig is complete.”

This Exxon station near the intersection of El Camino Real and NASA Parkway in Clear Lake felt the wrath of Hurricane Harvey as he came sweeping through the Bay Area.

Clear Lake Shores
Mayor Pro-tem Amanda Fenwick did not have exact figures but said the small community of Clear Lake Shores, which sits right on the water, was not spared. From 75 to 100 homes took on water, as did about a half dozen businesses.

Dickinson
League City neighbor, Dickinson, was another of our suffering cities with an estimated 7,376 homes and 88 businesses – 50 percent with major damage — nearly drowning in Harvey’s onslaught, including the home of the mayor. About 90 percent of the city was underwater at the height of the storm, we’re told, with at least half of the city’s 20,000 population now trying to dry out.

El Lago
Mayor Mark Briggs of El Lago says his little city wasn’t spared either, with about 90 homes damaged as the unending rain fell and nearby Taylor Lake filled to overflowing.

Friendswood
This city suffered major damage as Clear Creek raced out of its banks and into some 3,000 homes – including single-family dwellings, condos and apartments. As the waters rose and electricity was lost, hundreds had to be rescued and taken to shelters set up at Friendswood High, Wedgewood Elementary, Calvary Houston Church and the Friendswood Activity Building. Approximate 80 businesses also were flooded or suffered wind damage, including the Galloway School, which took in about 2 feet of water.

Kemah
While Kemah didn’t have any catastrophic damages, an estimated 48 structures were damaged during the hurricane – 20 in Kemah Oaks, 15 in South Kemah, 1 in Kemah Village, 3 in West Kemah and 9 on the east side of Highway 146. None met the 50 percent threshold. To help its residents, the city and the Kemah Community Development Corp.welcomed disaster recovery experts to a Business Alliance meeting — Rick Larson with FEMA and David Reetz with SBA – who shared information about resources available to business owners for assistance with recovery from both physical damage and financial loss due to declines in business revenues. Mayor Carl Joiner said, “It is important for us to join together as a community and support our local business owners,” going on the thank T-Bone Tom’s owner, Barry Terrell, and General Manager Jeff Sauerwein, for opening the restaurant early to host the Business Alliance Meeting.

Nassau Bay
This pretty city surrounded by Clear Lake, Lake Nassau and Nassau Bay, which turns into Clear Creek as it heads toward the Gulf of Mexico, got soggy again after its recovery from Hurricane Ike not so many years ago. Mayor Mark Denman reports that 154 homes (about 10 percent of the homes) took on water, but no businesses were damaged.

Webster
Compared to some areas, “Webster was very fortunate,” Economic Development Specialist Karen Coglianese says when asked about damages to the city. A total of 111 single family homes and 154 multi-family dwellings had minor damages, she explained. Some 75 businesses had minor damages. However, 2 businesses were not so fortunate, suffering major damage.

And, our recovery is far from over. Just the other day more than 150 people, including students, college employees and members of the public attended one of two assistance fairs at College of the Mainland in Texas City, taking the opportunity to answer questions remaining about assistance for victims of Hurricane Harvey.

Representatives from FEMA and other public and private assistance organizations helped direct people to appropriate assistance and information. Attendees also had a chance to meet directly with members of the FEMA Disaster Survivor Assistance Team.

In all, about 70 students, 30 employees and 50 members of the public took the opportunity to learn the next steps in navigating the recovery process. Just one example of what is being repeated all over Southeast Texas.”

“B Week” collection will begin the week of Monday, Nov. 13.

“A Week” collection will begin the week of Monday, Nov. 20.

As curbside recycling collection reboots, customers are encouraged to place only the following items in their green recycling carts: paper, cardboard, clean food cartons, plastic containers #1-5 and #7, aluminum cans and bi metal cans. A detailed list of accepted items can be found on SWMD website. Customers are also reminded that glass is not accepted in the curbside containers, but can be recycled at all City recycling drop-off locations. The recycling link previously mentioned lists those locations and has them mapped.

Here are a few other reminders to remember after the recycling hiatus:

1. No Hurricane Harvey Debris should be in the recycling cart. While we recognize that many customers used their carts to haul demolition material to the curb immediately after Harvey, material of that type is not recyclable and is considered trash.

2. Recycling should be loose and not bagged in the cart. Loose material speeds the processing line and ensures that contamination is kept at a minimum.

3. Glass is not accepted at this time and should be taken to a convenient drop-off site.

5. All city drop-off locations continue to work on a 7-day schedule until further notice. These sites include the Neighborhood Depositories, Westpark Recycling Center and the Environmental Service Center. Remember to check with 3-1- 1 or the SWMD webpage for operating hours.

Houston Councilman Dave Martin would like to make city of Houston residents aware that the Solid Waste Management Department will be suspending some of its collection services, specifically yard waste, recycling and junk waste/tree waste.

Department operations are to be focused on the current public health issues confronting the city in the wake of Hurricane Harvey’s aftermath. Services for self-serve operations will be expanded to accommodate residents who have already begun property removal. Neighborhood depository services will immediately move to a 7-day schedule until further notice. The department is focusing its efforts on disaster debris efforts to speed Houstonians property damage issues.

The Solid Waste Management Department appreciates our customers’ patience as we all recover from the disaster. Normal collection services will resume on the schedule as follows:

Disaster Debris from Hurricane Harvey will be collected on an ongoing basis until all material has been collected. Please place your debris at the curb as soon as possible. It is essential the piles be accessible by the collection crews therefore please do not park on the street blocking piles, and make sure the material is clear of tree branches, fire hydrants, utility lines. Please divide debris into the following categories.

Yardwaste collection will be suspended until further notice due to the need of extra personnel for debris collection for disaster recovery.

Normally scheduled Junk and Tree Waste collections will be suspended until further notice as all related personnel will be assigned to disaster debris collections.

Curbside single stream recycling collection will be suspended until further notice. All additional personnel will be assigned to debris collection for disaster recovery.

*Note: All Neighborhood Depository and Recycling Center sites will be on a seven day schedule, 10 a.m. – 7 p.m. beginning Thursday Aug. 31. To continue recycling during this time, residents may bring their recyclables to these sites listed below, or to the Westpark Recycling Center, which will maintain its normal 8 a.m. – 5 p.m. Monday – Saturday schedule. Facilities will be CLOSED Monday 9/4/17 for Labor Day.

Please note, household garbage, electronics or household hazardous waste are not accpted at the neighborhood depositories.

Each user must provide the following as proof of residency:

• A current Texas Driver’s license (a current Texas Department of Public Safety issued I.D. may be substituted) or a Texas License to Carry and
• A current utility bill or city property tax receipt. Addresses and names on all presented documents must match Texas Driver’s License or ID.
* Electronic records are NOT accepted.
• RECYCLING ONLY – No proof of residency required.
• NO PETS allowed on premises.

The District E office continues to work from remote locations and the best way to reach the office is districte@houstontx.gov.