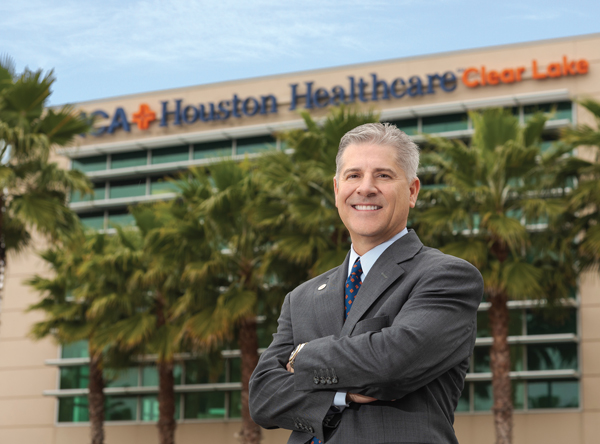 Someone I’d like to meet: President George W. Bush

If I could switch places with someone for just one day, I’d choose: Ronald Reagan when he was President

My favorite performer is: Kenny Chesney

If I could travel to any place, I’d choose: Italy

My favorite meal is:  Italian Food
As a youngster, I wanted to grow up to be:  Influential

The thing that bugs me the most is: People who take short cuts

My favorite movie is: Rocky and also The Godfather

Few people know: I am working very hard to be a better listener 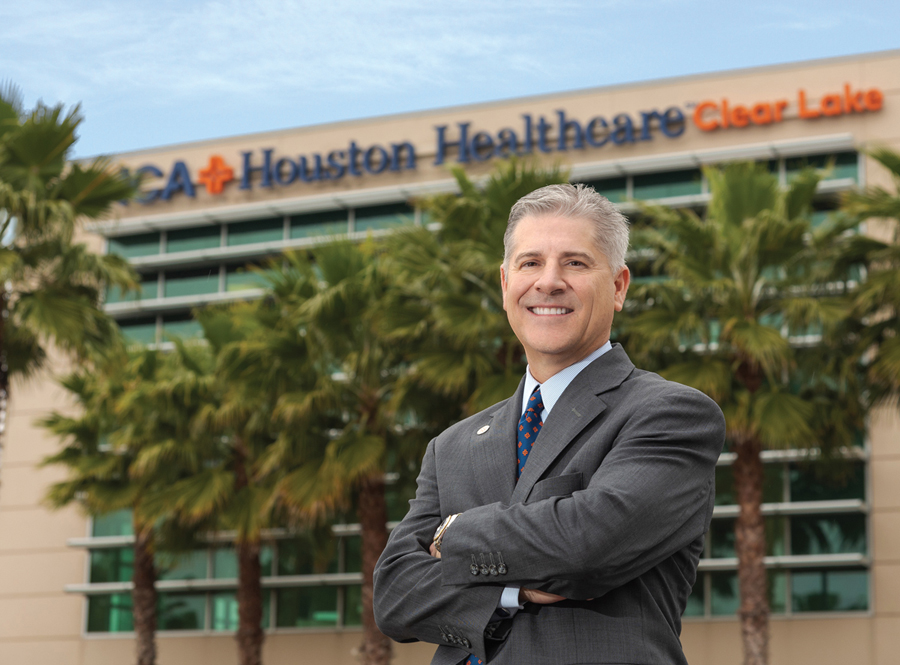 “I’m what you’d call an HCA Lifer and have been with this company a long time. As HCA Houston Healthcare Clear Lake aligns more deeply with the broader HCA network and looks forward to major investments in women’s and emergency services, our future has never been more bright. I’m proud of our staff, patients, and community for their resilience and commitment to making the Bay Area best-in-class not just for medicine, but for working and living.”

A relatively new procedure, TAVR replaces damaged aortic valves through a catheter in contrast to open-heart surgery in which surgeons cut open the chest to expose the heart. Typically, candidates for TAVR suffer from aortic stenosis, a common but serious valve problem in which the aortic valve opening narrows, dangerously restricting blood flow and affecting pressure in the heart.

The Food and Drug Administration (FDA) approved TAVR in 2012 for patients who are considered at high risk for open-heart surgery. In 2016, the FDA approved the procedure for patients at intermediate risk. Later this year, experts expect the agency to expand its approval to low-risk patients, which will dramatically increase the number of patients who qualify for TAVR.

Just this April, Rolling Stones rocker Mick Jagger underwent TAVR for his heart valve disease, raising awareness of the procedure’s benefits, including not needing to rely on a bypass machine and a faster recovery – one to two days instead of three to five. 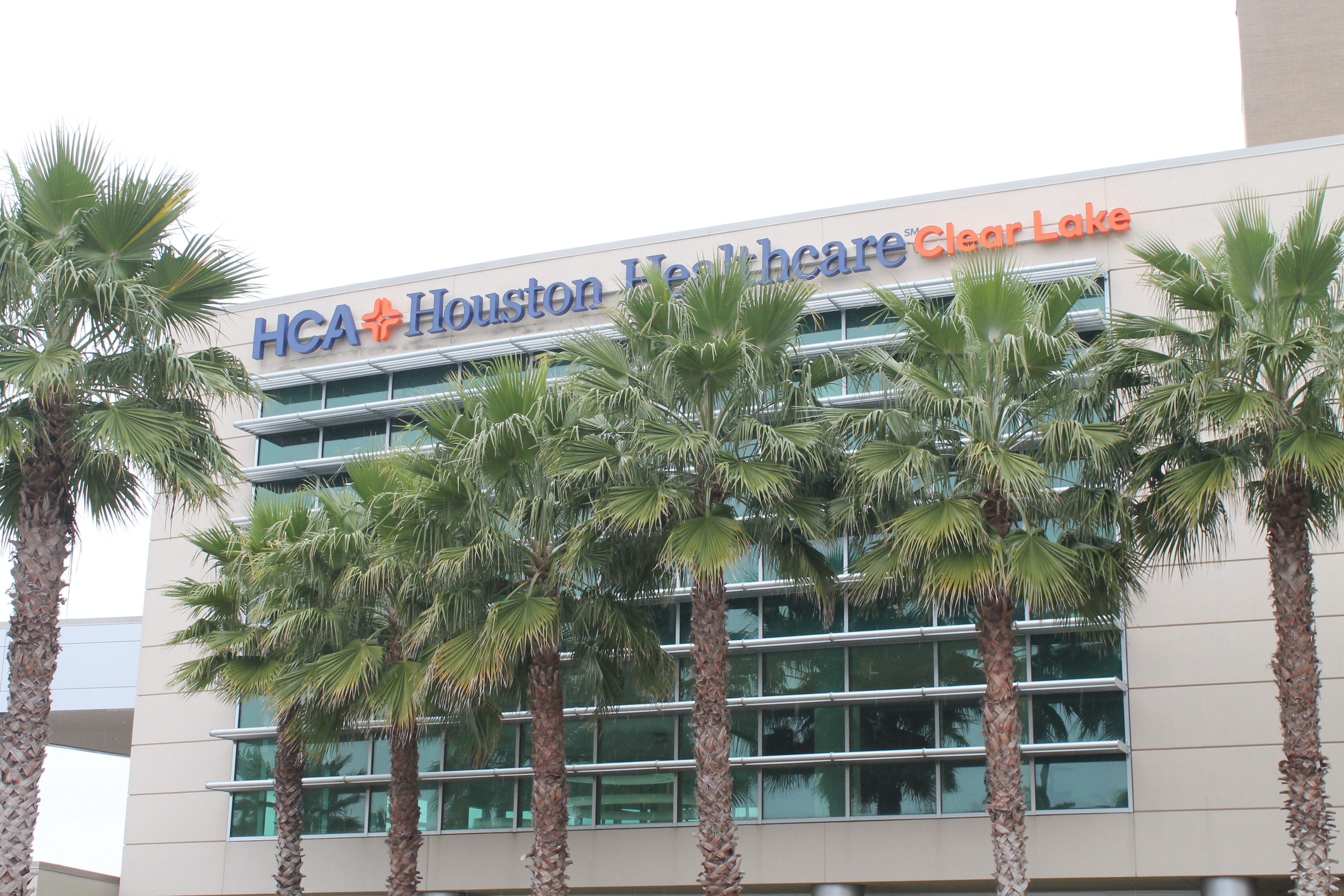 Officials said the name was changed to better reflect the hospital’s affiliation with one of Houston’s most comprehensive healthcare systems. They gathered at the hospital with League City Mayor Pat Hallisey and officials representing Webster Mayor Donna Rogers to officially launch its new identity.

“Taking the HCA name signals our commitment to be held to the highest standards in the industry,” said Todd Caliva, chief executive officer of HCA Houston Healthcare Clear Lake, who also announced upcoming improvements to the hospital, including new VIP labor and delivery suites, a facelift to the women’s services department, major construction to the Emergency Department entrance, two new operating rooms, a major cath lab expansion, and a significant bed expansion.

THIRD CHANGE
Actually, it is the third name change for the medical facility. It started out life as Clear Lake Hospital, but later became known as Humana Hospital-Clear Lake and then as Clear Lake Regional Medical Center.

Fay Dudney, wife of the late Dr. Ned Dudney of League City, who helped turn a dream into a reality, remembered how it all happened when she talked with us back in 2012 as the hospital was celebrating its 40th anniversary.

“Dr. Larry Chapman (who died Dec. 2, 2018) came over from Seabrook to see us, and when he walked in, he said, ‘Ned, I want you to help me build a hospital here in our area.’”
Dudney, who had to put patients in hospitals long distances from their homes, immediately liked the idea, and “soon we sought out physicians all over the area,” Dr. Chapman said as he thought back to those heady days.

Joined by the late Dr. Joe Symon of Friendswood, “the three of us pursued things pretty hard, and before long some 18 to 20 doctors practicing at Bayshore Hospital in Pasadena gave us their blessings. And, their financial backing,” Dr. Chapman recalled.

The group bought a 70-acre tract bounded by State Highway 3 and Texas Avenue in Webster, and on George Washington’s birthday, Feb. 22, 1970, a crowd of 500 gathered for the groundbreaking of the $4.2 million hospital, which opened with 150 beds, but designed to hold 600 beds.

OPENING DAY
A crowd of 3,000 was on hand Sunday, March 12, 1972 for the dedication and opening of Clear Lake Hospital, as it was originally named. But over the years it has grown so much it is barely recognizable in early photographs. A new emergency room was added in 2003, and its $55 million Heart & Vascular Hospital was built across the street in 2007, then expanded in 2010 with a $17 million, 72-room addition that included a pharmacy and dialysis unit.

The hospital grew even larger in 2012 with a $92 million expansion that included a 154,000- square-foot Patient Tower with a 30-bed Intensive Care Unit and a wide range of innovations.

Every year, HCA Houston Healthcare provides care for more than one million hospital patients, more than 450,000 emergency room patients and delivers one in four births in Houston. It currently has more than 16,000 employees, including 6,900 nurses. And, now a new name.