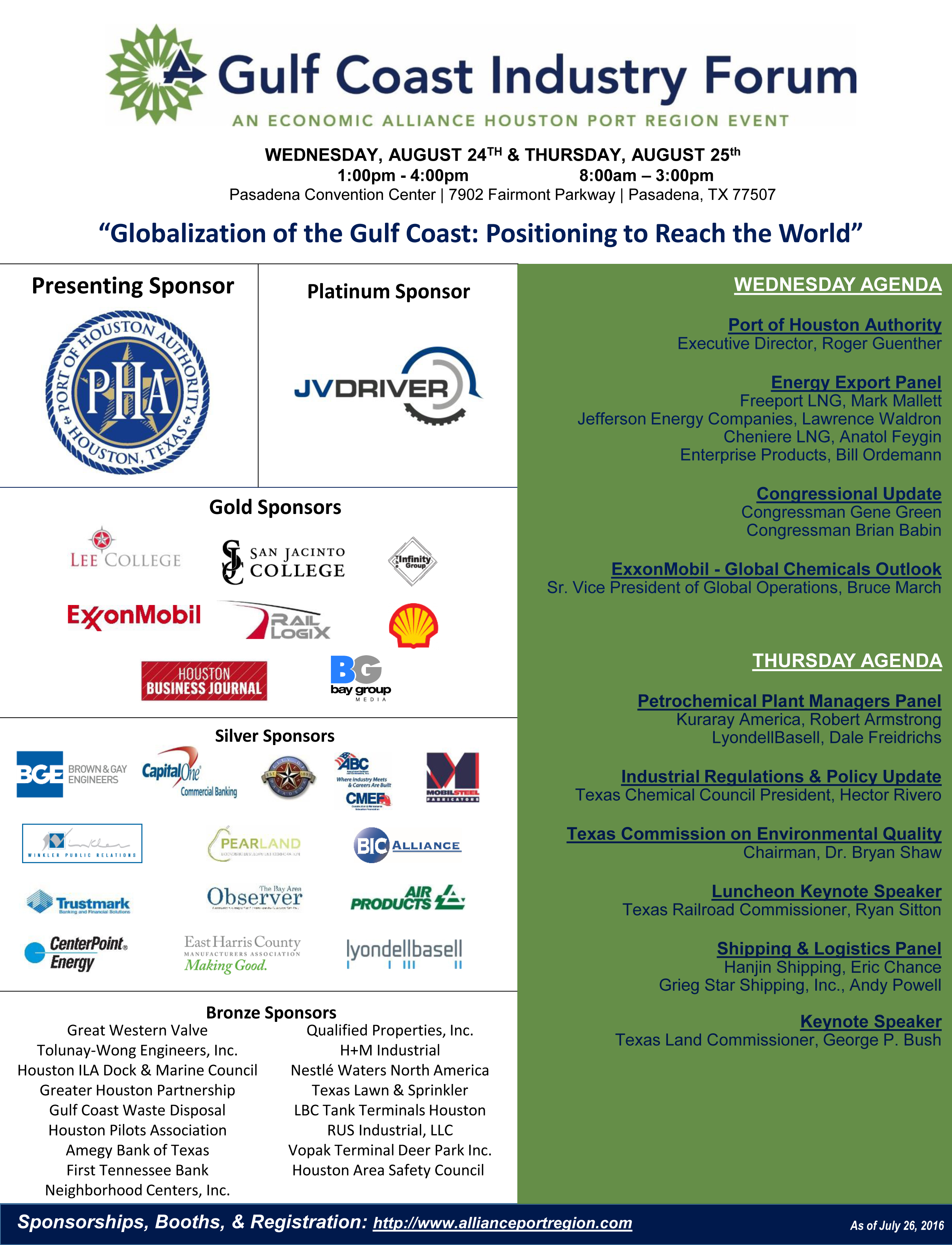 The Houston Port Region is home to the largest petrochemical complex in the nation and its second largest port.  However, seven years ago in 2009 the petrochemical industry growth plateaued across the gulf. The United States was in the heart of a recession and banking crisis. The Houston Port Region had just been rocked by Hurricane Ike in 2008 and was in the process of recovering from the impact.

In the midst of these events, East Harris County Manufacturers Association (EHCMA) approached the Economic Alliance about hosting an event that focused on forecasting for the petrochemical and maritime industry in Houston and thus, the Petrochemical and Maritime Outlook Conference (PMOC) was born.

EHCMA and the Economic Alliance worked hard to produce an event that maintained the goal of bringing industry drivers to provide a look at what was happening and what to expect in the region. The conference debuted Sept. 8, 2010. President and CEO Chad Burke stated prior to the first conference “This conference will provide invaluable planning tools for the petrochemical industry,” and that is exactly what the conference did.

The first year conference exceeded expectations. “Our original goal was 300 and we ended up with 450 attendees. We reached our capacity of 30 booths and had to turn down requests for booths the last two weeks [leading up to the conference],” said Chad Burke

Over the next five years the PMOC stayed true to its original goal. After the economic turn in 2010 and the trend of growth beginning in 2011, the conference has matched its growth right along with the region’s economy.  Each year the conference has managed to increase attendees and sponsors.  Just as the conference’s focus has remained the same, it has also maintained a firm grasp on its roots.  Even with its continued growth the conference has always been held in the Pasadena Convention Center and will continue using the facility for this year’s event.

Pasadena is in the center of the petrochemical and maritime region, and in hosting this event there is a nod to the industries that find themselves at the focus of the conference.  As the conference is directed towards forecasting the future of the industry, who better is there to share the information with than the individuals who will be in the industry in the future.

In addition to executives, plant managers, stakeholders and congressmen that attend each year, the conference also welcomes students from local colleges such as San Jacinto College, Lee College, and the University of Houston-Clear Lake, as well as local high school students to listen to the variety of selected speakers.

Over the past six years the conference has been honored to hear speakers such as Sen. John Cornyn, Port of Houston Chairman Janiece Longoria and the Panama Canal Authority Executive Manager Sylvia de Marucci, as well as many prominent plant managers in the region.

After the record breaking success of the 2015 PMOC that welcomed 715 attendees, almost double its inaugural year, the Economic Alliance chose to expand and rebrand its successful conference. This year the conference has been named the Gulf Coast Industry Forum (GCIF) and will be held over the course of two days rather than the usual one day only event.

Due to the expansion that now incorporates all Gulf Coast petrochemical and maritime industries, instead of those only in the Houston Ship Channel, the conference will shift its focus this year to discuss the globalization of the entirety of the Gulf Coast. As companies reposition manufacturing assets to the Gulf Coast to take advantage of low priced feedstocks, it will become the global center of production in the petrochemical industry.

In addition to the invaluable information that will be provided by the speakers, the conference will hold an Energy Export Panel and a Congressional Update on the 24th, and a Petrochemical Panel and Shipping and Logistics Panel on the 25th. The Gulf Coast Industry Forum will begin at 1 p.m. on Aug. 24, and will open again at 8 a.m. Aug. 25 for the second day.

Registration and more information including a full conference agenda are both available on the Economic Alliance Port Houston Region website. The Gulf Coast Industry Forum hopes to build upon the success and value that the PMOC brought to the Houston Port Region and reflect its’ expanding global significance.