This prestigious group will be officially inducted on Friday, May 8, the 75th anniversary of VE Day, at the 2020 Texas Aviation Hall of Fame Induction Ceremony and Luncheon at the Lone Star Flight Museum at Ellington Airport.

The Texas Aviation Hall of Fame was established in 1995 to honor and recognize Texans and Texas companies or organizations that have made significant and lasting contributions to the advancement of aviation. There are currently 76 individuals and groups in the Texas Aviation Hall of Fame, in four categories which include: trailblazers and explorers, wartime aviators, leaders, entrepreneurs and innovators.

To be selected as a member of the Texas Aviation Hall of Fame, the individual or group must have a significant connection to Texas and have left an indelible mark on the history of aviation or be an aviator who made an extraordinary contribution to the world in another field.

With a Bachelor’s degree in General Science from the U.S. Naval Academy and a Master’s degree in Electrical Engineering from the U.S. Air Force Institute of Technology, George W.S. Abbey flew both helicopters and fixed-wing aircraft, logging more than 5,000 hours in the air.  Serving as the USAF technical liaison at Boeing on the Dyna-Soar, SST and Lunar Orbiter projects, he was later detailed to NASA in 1964.  In 1967, Abbey left the Air Force and was named technical assistant to the JSC Center Director during the Apollo, Skylab and the Apollo-Soyuz programs.

In 1976, Abbey was named NASA’s director of flight operations, and was responsible for overall direction and management of flight crew and flight control activities for all human space missions. In 1988, he was appointed deputy associate administrator for space flight at NASA Headquarters, and later appointed senior director for civil space policy for the National Space Council in the Executive Office of the President.  In 1992 Abbey was named special assistant to the NASA administrator before being named deputy director of Johnson Space Center in 1994 and then JSC center director from 1996 to 2001.  After retirement from NASA in 2003, he became Senior Fellow in Space Policy at Rice University’s Baker Institute for Public Policy.

Raised in Elmira, N.Y., Col. (Ret.) Eileen Collins earned her B.S. from Syracuse University. She was commissioned in the US Air Force and graduated from Undergraduate Pilot Training at Vance AFB in 1979. After T-38 instructor duties at Vance, she transitioned to the C-141 Starlifter. During her service, Collins pursued a Master’s degree in Operations Research from Stanford and a Master’s in Space Systems Management from Webster. She was assistant professor of mathematics and a T-41 instructor at the US Air Force Academy from 1986-1989, and in 1990 graduated from the Air Force Test Pilot School and was selected as an astronaut in 1991. She flew as the pilot on Mission STS-63 in 1995, becoming the first female Space Shuttle pilot.

She also served as pilot for STS-84 before becoming the first female commander of a U.S. spacecraft on STS-93 in 1999. In 2005, she was the commander of STS-114, the first “return to flight” mission after the loss of Space Shuttle Columbia.  She also was the first astronaut to fly the Space Shuttle through a complete 360-degree pitch maneuver. Collins retired from NASA in 2006 and works as an aerospace consultant and professional speaker.

A Texas-native, Schulz enlisted in the Army in 1943 and after earning his wings in 1944 was stationed at Hondo Air Base, Texas as a pilot and engineering officer. Later stationed at Ladd Field, Alaska, he became a cold weather pilot flying C-45s, C-46s, C-47s, C-54s, B-17s and B-25s and R-4 helicopters.  From 1947 to 1957 he was a commercial pilot with Arctic Pacific Air and Wien Alaska Airlines, before joining the CAA (forerunner to the FAA) in 1957.  Beginning as an air carrier inspector and an instructor for pilot certification he later transferred to FAA Headquarters. Schulz earned his DC-9 type rating and became the Executive Officer of In-Flight Standards Service.

As an independent consultant from 1975 to 2005, Schultz assisted airlines with management practices and ensuring FAR compliance.  After industry deregulation, he assisted airlines with FAA air carrier certification. Beginning in 1992, he worked with Morris Airlines to bring operations into compliance with FAA certification and assisted with certification as the first airline to use the Heads-Up displays and transition to fully digital electronic operations. In 1998, Schulz was asked to join a team creating a new airline and to run the certification process. Becoming involved with the selection and purchase of aircraft, Schulz guided JetBlue Airways through its certification process before retiring in 2005.

Born in South Carolina, Tyson Weihs received a B.S. in Computer Science from Trinity University and his MBA from Rice University. Weihs is the CEO of ForeFlight, a Texas-based software company that employs over 200 people in Houston and Austin.  Weihs’ software has revolutionized flight planning, in-flight weather and was the first to bring the concept of an electronic flight bag to the iPad. In addition to the hundreds of thousands of private and corporate pilots who rely on ForeFlight for planning and in-flight decision making, the Department of Defense depends on the ForeFlight Military Flight Bag version of the application.

ForeFlight is also the provider of Jeppesen’s FlightDeck Pro EFB used by airline pilots around the world. Beyond the convenience of flight planning and in-flight weather on a mobile device, the biggest impact that Weihs and ForeFlight have had on aviation is safety. With Weihs’ ingenuity, passion and leadership, ForeFlight’s software and hardware solutions provide pilots with in-flight weather, traffic awareness, safety alerts, synthetic vision and other decision-making tools. These features have saved countless lives and represent one of the biggest technological innovations since GPS was certified for airplanes. He currently lives in Houston.

To become a 2020 Texas Aviation Hall of Fame event sponsor, visit LoneStarFlight.org/TAHOF2020 or call 346-352-7678. Tickets for the induction ceremony and luncheon will be available for purchase March 13.

May 8 also commemorates the 75th anniversary of the World War II Victory in Europe. Along with celebrating the 2020 Hall of Fame inductees, the Lone Star Flight Museum will also kick-off the 75th anniversary of the end of World War II. The summer long program, aptly named Fight To The Finish, is an invitation for Houstonians to take part in recognizing this significant anniversary and honor those that served and supported the U.S. to victory during WWII.  This four-month celebration will include special events, presentations, screenings, exhibits and more.

About the Lone Star Flight Museum

The Lone Star Flight Museum (LSFM) is a 501c3 aviation museum and STEM learning center with a mission to celebrate flight and achievements in Texas aviation as well as educate and engage our youth through science, technology, engineering and math. In addition to the Texas Aviation Hall of Fame, the 130,000 square foot museum is home to a flying collection of rare and historic commercial, general aviation and military aircraft. Guests can experience the wonder of flight in a warbird ride and get hands-on in the high-tech Aviation Learning Center and Flight Academy. Multiple public and STEM-focused education programs create an unforgettable museum experience for visitors of all ages. Located at Ellington Airport, just 20 minutes from downtown Houston, LSFM is open Tuesday-Sunday. Tickets start at $9.95 with senior and military discounts. Memberships are also available. For details, visit lonestarflight.org or call 346-708-2517. Follow on Facebook, Instagram. 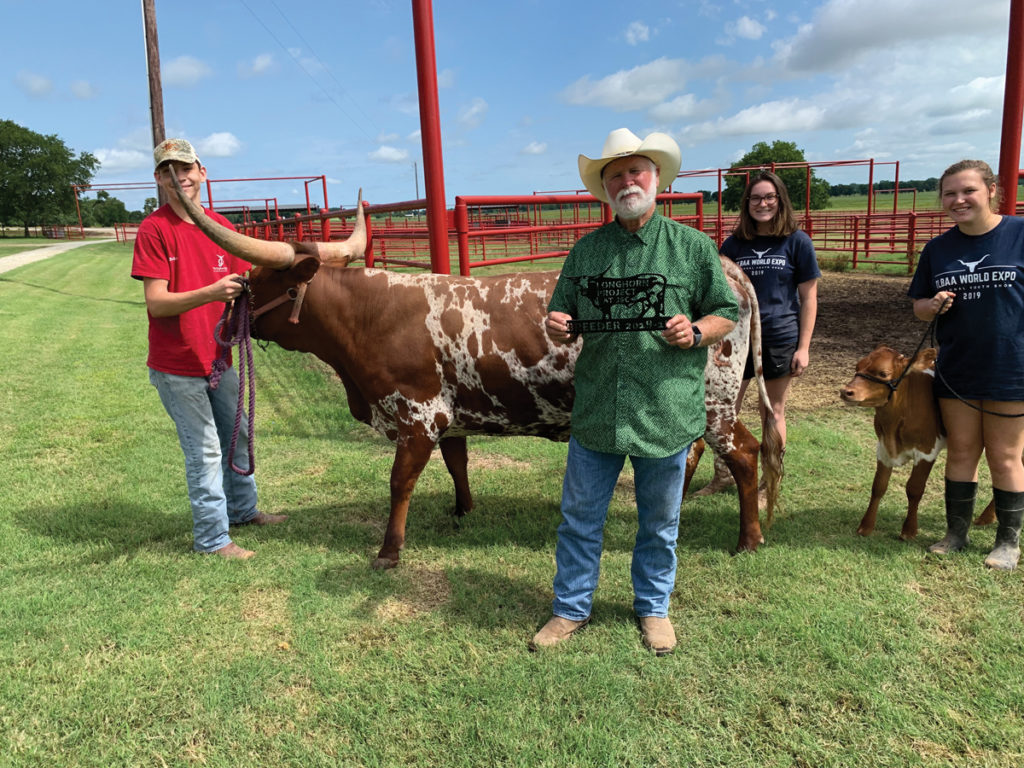 The Longhorn Project Board of Directors hosted its annual End of Year Celebration on Saturday, June 8, 2019, at the Western Heritage Pavilion, located at NASA Johnson Space Center to commemorate the 2018-2019 show season and school year.

Project Manager Henry Wilson was recognized for his exceptional commitment to producing a winning show team of herd of longhorns, Rudy’s Country Store & Barb-B-Que Webster was recognized providing the delicious meal and its generous support over the past year, and President and Chairman of Bay Group Media Rick Clapp was recognized for donating his public relations services to help promote the mission of the program.

Rick Fritsche, manager and registrar of the Texas Longhorn Breeders Association of America (TLBAA), impressed the crowd with presenting the statistics that over 7,000 longhorns from 11 countries are registered with the TLBAA and the longest horns on a Texas Registered Longhorn Steer were recently measured at 129.4”.

“The Longhorn Project is best known for its Show Team and participation on the Texas Longhorn Breeders Association of America (TLBAA) show circuit in Texas and Louisiana,” said Board Chairman, Andrea Wilson. “And in addition to the Show Team, the Longhorn Project offers a 3.5-hour agriculture and STEM-based educational curriculum for 3rd – 12th grade students, that was championed by former Clear Creek ISD superintendent Dr. Sandra Mossman, that focuses on the interaction of agriculture, livestock and space exploration,” she added.