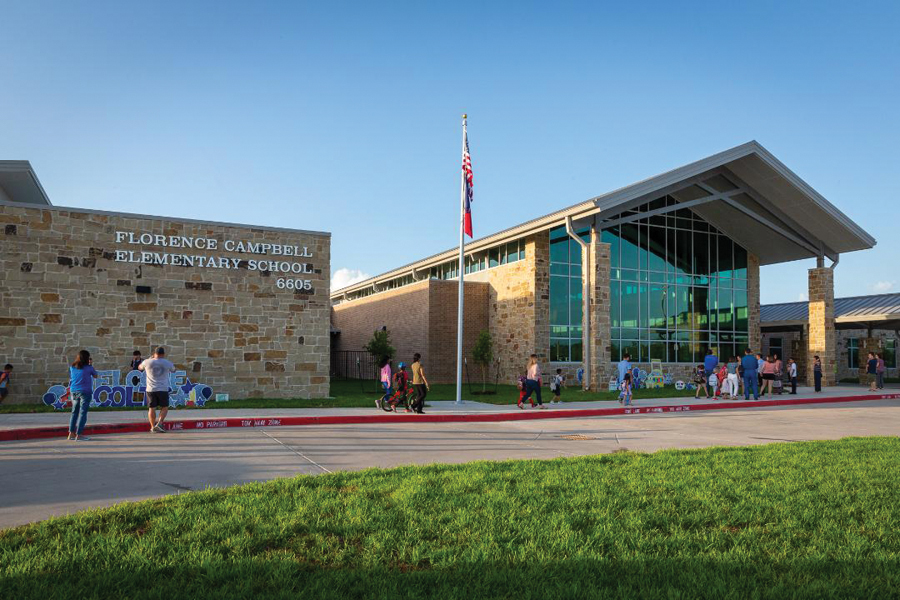 CCISD’s newest school is named for Florence Campbell, a longtime educator within the District, and the mother of Travis Campbell, whose family donated the land on which the campus was built in her honor.

District officials said the new $43 million school was built to address the extreme overcrowding conditions down the road at Hall Elementary and throughout the western part of League City. Although enrollment initially is 600, the school has a capacity for 1,000 students.

Galveston-Brazoria Cooperative for the Hearing Impaired (GBCHI) students, formerly housed at Gilmore Elementary, are being relocated to their brand-new building on the Campbell campus.

Along with the new GBCHI building, some of the other features of CCISD’s 27th elementary school include designated collaborative and creative spaces for each grade level and an expanded stacking lane for vehicles in an effort to move cars off the main thoroughfares.

“The soil on the land in which we stand today will really go about planting the seeds of the future of tomorrow,” Superintendent Dr. Greg Smith said at the groundbreaking for the new school April 18, 2018. “I am confident that the students who will attend Florence Campbell Elementary will in fact experience the critical virtues of a strong public education and chart new pathways for learning.”

VLK architects designed the new school, which was built by general contractor Drymalla Construction and was part of the 2017 CCISD Bond program.

Clear Creek ISD is forming a School Boundary Advisory Committee to develop and present new boundary recommendations to the District’s Board of Trustees for Florence Campbell Elementary, which is scheduled to open in August 2019 in League City.

Anyone interested in volunteering his or her time may submit information online here or visit www.ccisd.net.  CCISD employees are not eligible to serve on the committee. All members shall be selected by random drawing in accordance with CCISD policy, FC (Local).

The deadline to apply to be on the committee is Sept. 26. A random drawing, based on membership criteria of policy FC Local, will occur on Sept. 27 at 4:30 p.m.

Committee meeting dates will be: