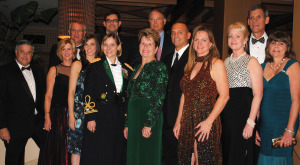 A number of outstanding community volunteers were honored when the Clear Creek Education Foundation hosted its annual gala at South Shore Harbour Resort in League City.

Among them were Jamieson Mackey, former CCEF chairman and immediate past chairman of the Clear Lake Area Chamber, who was named Citizen of the Year, and retired Clear Creek ISD Superintendent Dr. Sandra Mossman, who was presented the George Carlisle Distinguished Service Award – both for their visionary leadership.

Distinguished Alumni Award winners for 2014 were:

Other honorees included the winner of the Valor Award, U.S. Army Col. Eugenia K. Guilmartin, who earned her Ph.D at Stanford University after graduating from Clear Lake High in 1989 and became the first woman adjutant for the Corps of Cadets in the history of West Point; and Sharon and Tony Bloomfield, who won the Dennis Johnson Memorial Small Business Award for their strong support of both Clear Creek ISD and CCEF.

This year’s Superstar Award winners were:

Theme for this year’s gala was “You’ve Gotta Have Heart” and featured both live and silent auctions and dancing after dinner to Andy and the Dreamsicles.

Gala Co-Chairmen Katy Bastedo and Kay Lee Benoit hosted a reception in the Harbourview Room for the honorees and their escorts prior to the event, after which emcee Dr. Greg Smith welcomed the crowd of about 300 in the downstairs Crystal Ballroom.