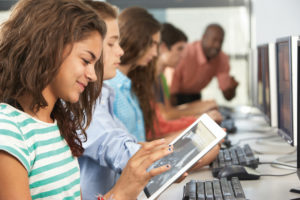 The Clear Creek School District got a resounding vote of confidence from the Bay Area community in its latest survey of parents, students and staff members with 89 percent saying they have a positive impression of the school district and 88 percent giving the district a grade of  A or B.

When those polled were questioned about the biggest challenge facing the school district, CCISD said “the community ranked testing and regulations as the top challenges, followed by overcrowded schools.” This contrasts with CCISD’s 2014 survey when school funding and parental involvement got top ranking.

Preparedness
Most parents seemed pleased about their children’s academic performance and preparedness with 88 percent saying they feel their children will do well in the next grade level, while 83 percent think their children are receiving instruction that is appropriate for his or her abilities and 72 percent think the level of homework difficulty is appropriate.
Student answers were similar with 88 percent saying they feel prepared to do well at the next grade level, 83 agreeing that they are receiving instruction appropriate for their abilities and 84 percent saying they get the support they need to be successful. Some 93 percent of the staff said they believe their campus does a great job of challenging students to their full potential. This compares with 87 percent in 2014.

Communication
The community’s satisfaction with CCISD’s communications rose from 89 to 91 percent between 2014 and 2016, the survey shows. Meanwhile, “80 percent of the parents think their children receive meaningful feedback from teachers, compared with 63 percent in 2014,” CCISD said, adding that “81 percent of students also agree that they receive helpful feedback about their work. Ninety-two percent of the staff says they communicate frequently with most parents of students.”

Technology
Most all seem pleased with the student tablets/laptops, which 84 percent of the teachers say they use in their instruction and 81 percent of the students agree their teachers effectively integrate technology into their teaching.
“The ability to use Microsoft Office applications and the ability to create projects were the two highest responses from students, staff and parents when asked which skills students are better at when using a district-issued laptop or tablet,” CCISD said. Eighty-five percent of the staff and 68 percent of students polled believe student learning is enhanced because of the Latitude-2-Learn program.”

Community results are based from a 2016 Baselice & Associates Phone Survey with a 4.9 percent (+) or (-) margin of error, the district said. “The parent, student and employee results are based from email surveys. The 2016 email survey respondents included 3,038 parents, 18,320 students and 2,270 staff.” To view all four surveys, visit www.ccisd.net/communications. For more information, contact the Office of Communications at 281-284-0020 or by email at information@ccisd.net