Many area schools getting major surgery

Don’t stand still for long at one of the dozen or so Clear Creek ISD schools where construction is under way. They might build over you – especially at the site where the new Challenger Columbia Stadium is going up.

Two campuses (Clear Lake High and McWhirter Elementary) or getting complete makeovers while several others are being readied for or undergoing major surgery.

The stadium site at 1955 W. NASA Blvd. in League City has been cleared, site utilities installed, the main loop road has been lime stabilized and the paving has been poured, Assistant Communications Director Janice Scott said. 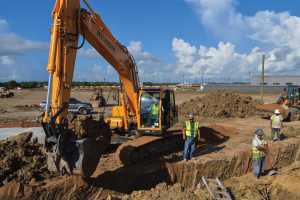 “The slab has also been poured for the field house and steel beams are going up,” she added.
The three projects are all part of the 2013 CCISD Bond, as are those at Clear Brook High and Seabrook Intermediate.

Not far away, Clear Brook High between Clear Lake and Friendswood is getting a $20.7 million renovation that includes a correcting a major foundation failure that Facility Services Director Paul Miller says caused a section of the building to separate.

The new school entryway will have an enclosed courtyard and offer an upgrade in security. Plans are to add additional classrooms and lab space, administrative space, a new auditorium and renovations in the library. Plus upgrades for athletes – more restrooms, additional parking and a traffic loop, new practice fields, new lockers and storage for football and renovations in the weight room.

The work includes the demolition of McWhirter Elementary School in Webster and construction of a new campus. A rebuild of Clear Lake High School, as well as a new gym for Clear Springs High and more science classrooms at Creekside Intermediate. Preliminary schematic layouts of athletics, dance, fine arts, ROTC and CTE spaces have been reviewed and approved by District staff for Clear Creek High School. 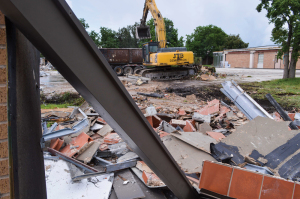 At Seabrook Intermediate portable buildings have been installed to accommodate the need for additional classrooms during construction.

Renovation at Seabrook Intermediate, which was built in 1966, will include the addition of seven classrooms, an art room, three science classrooms, a food lab, plus track and tennis court facilities.