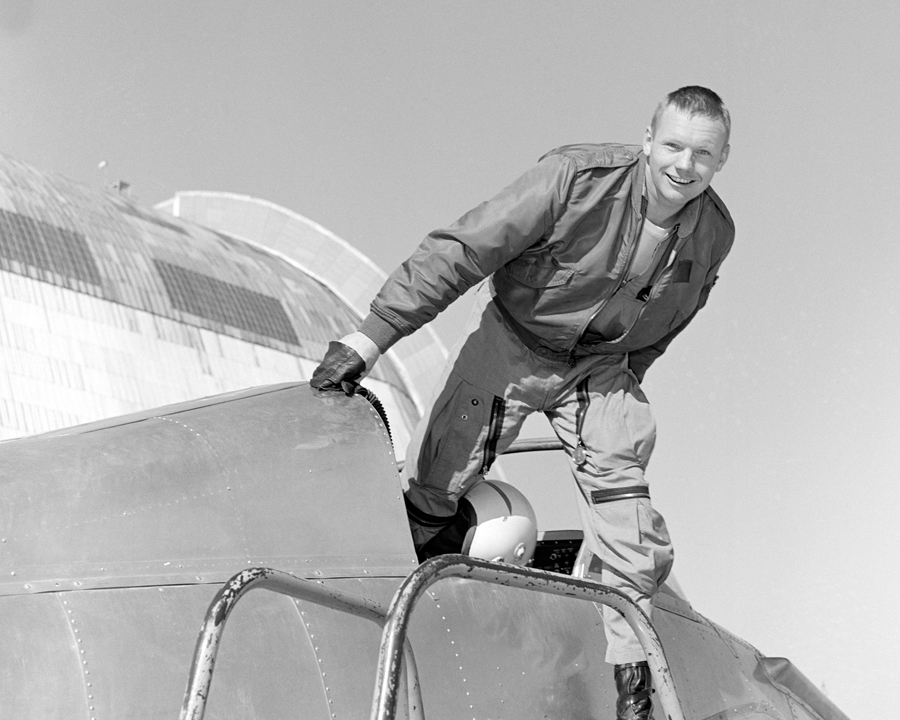 A young Neil Armstrong is photographed in the cockpit of the Ames Belt X-14 aircraft at NASA’s Ames Research Center. 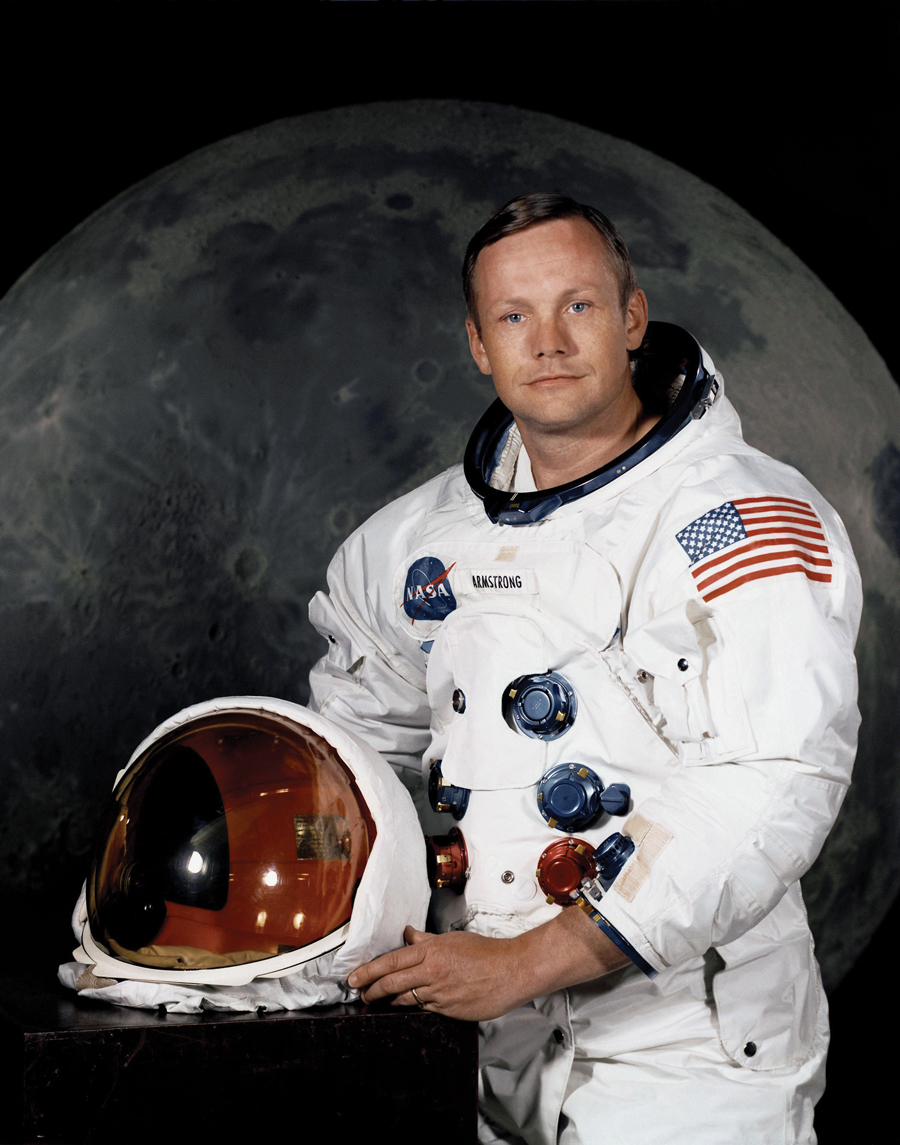 As the first man to walk on the Moon in July 1969, Neil Armstrong quickly became the most famous man in the universe, which, being the humble man he was, was not to his liking.
This was brought out at his funeral in August 2012. “You’ll never get a hero, in my view, like Neil Armstrong,” Apollo 8 astronaut Bill Anders said after the service, praising Armstrong for both his wisdom and humility in the way he handled becoming a global icon.

“America has truly lost a legend,” astronaut Eugene Cernan, the last man to walk on the moon, said.

“He was the embodiment of everything this nation is about,” then NASA Administrator and former astronaut Charles Bolden said about the famously shy, almost taciturn man, adding that Armstrong was a man with a courageous drive to explore, yet “incredibly humble.”

Neil Alden Armstrong was born Aug. 5, 1930 on his grandparents’ farm in Wapakoneta, Ohio and developed a love for flying early in life while becoming an Eagle Scout.

FLYING LESSONS
When he was just six, he made his first flight with his father, who worked for the state government, and formed a passion for flying that would last all his life. His hero was Charles Lindbergh. He took flying lessons and received his flying license on his 16th birthday — before he earned his driver’s license.

His education was interrupted when he was called to active duty in 1949 but continued after pilot training in Pensacola, Fla., and 78 combat missions over Korea, including one when his Navy fighter was severely damaged and he was forced to eject. However, he landed near a South Korean base and was safely rescued.

TEST PILOT
After graduating from Purdue, he became a test pilot for NASA’s forerunner, the National Advisory Committee on Aeronautics, serving as one of an elite group selected to pit technology against nature’s limitations.

In 1962, he became an astronaut, and after serving as a backup for Gemini 5, he was chosen to command Gemini 8. But shortly after he and David Scott conducted the first successful docking in space, the joined spacecraft began spinning out of control when a thruster failed. Armstrong finally regained control by using thrusters intended for reentry, saving their lives.

Armstrong’s successful action, averting disaster on Gemini 8, and his flying skills led to his selection as commander of Apollo 11.

OFF TO THE MOON
By 1969, the team was ready to fulfill President Kennedy’s promise to put a man on the moon in that decade. In a spacecraft reported to have had control systems with less than a thousandth of the computing power of a modern laptop, Armstrong and his colleagues Buzz Aldrin and Michael Collins made for the Moon.

People across the world bought television sets for the first time to witness their endeavor, and more than 500 million watched every moment of Apollo 11’s arrival on the lunar surface on July 20.

After steering to avoid large rocks, Armstrong had only 20 seconds of fuel left when he finally landed the module safely between boulders. From inside the capsule, he reported back to an emotional Mission Control in Houston that “the Eagle has landed.”

ONE SMALL STEP
And as he disembarked, he uttered his carefully prepared phrase, that what he was making was “one small step for man, one giant leap for mankind.” Then, as an awe-struck world watched, the humble man from Ohio, with Aldrin by his side, planted an American flag on the Sea of Tranquility. A little later, he talked by phone and received congratulations from President Nixon.

Back on Earth, the crew received global adulation, and were treated like movie stars wherever they went. But, after the initial celebrations, Armstrong refused to cash in on his celebrity.

The man who was revered as a hero by the American public and awarded the Presidential Medal of Freedom by President Richard Nixon for his work, shunned the limelight and the prospective fortune that came with it.

Instead, he lived in the seclusion of his Ohio farmhouse, taught engineering at the University of Cincinnati and later went into business. He refused to give interviews or sign autographs and disappointed many fans with his requests for privacy and gave only occasional speeches. He reportedly once said, “I don’t want to be a living memorial,” and remained happy to “bask in obscurity.”

HERE FOR 20TH
Only reluctantly did he join his fellow astronauts for anniversary celebrations of the Moon landing. In 1989, he came back Clear Lake for the 20th anniversary of the lunar landing, joining some 10,000 Johnson Space center employees for a picnic at JSC. Then, that evening he and Collins and Aldrin and their wives were honored at a big party at the Hilton Hotel in Nassau Bay, across the street from the space center.

All three astronauts mingled with the crowd and smiled for pictures.

In 1999, 30 years after the moon landing, he stood with Aldrin and Collins to receive the Langley medal for aviation from then Vice President Al Gore before returning to his quiet life, hoping to be forgotten.

Then in April 2004, Armstrong returned to the Bay Area when the Rotary National Award for Space Achievement Foundation honored him with the National Space Trophy at the annual Space Gala – believed to be the last large function he attended.

But, the millions around the world who sat glued to their television sets in July 1969 saw their most fantastic dreams made real. For them, the shy man from Ohio opened a fresh frontier and there will be no forgetting Neil Armstrong and his awe-inspiring achievement.