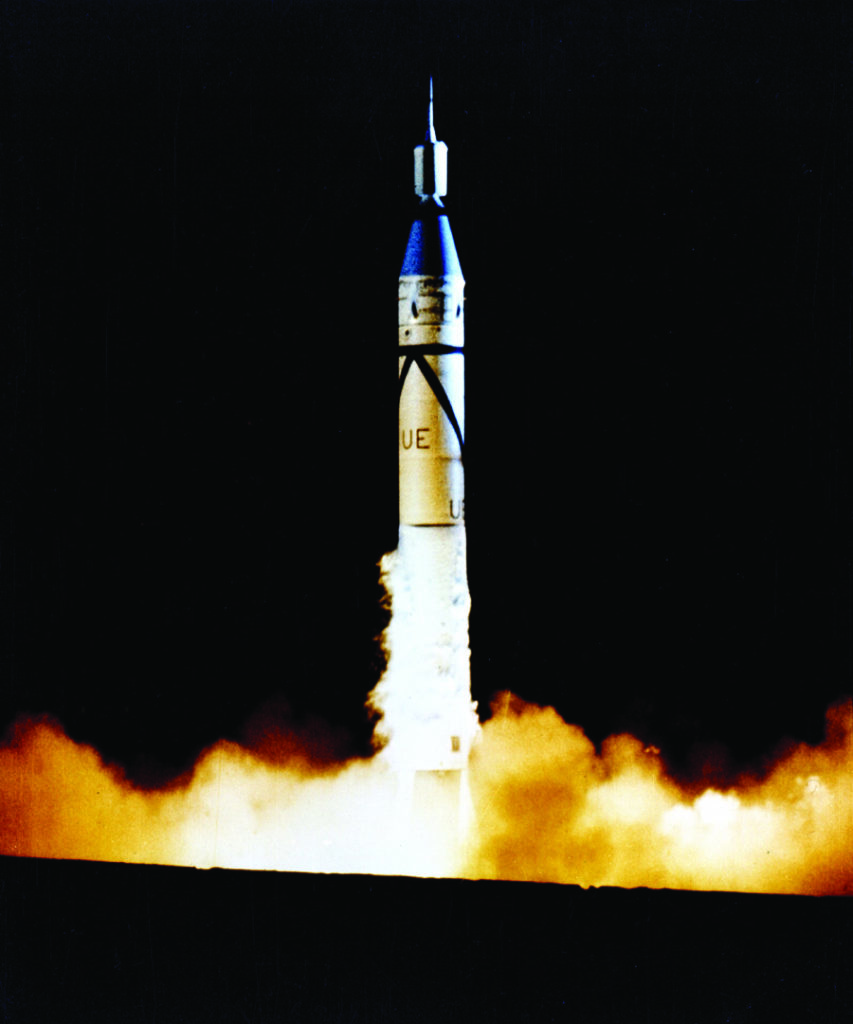 Launch of Explorer 1 on the Juno rocket. Photo: NASA

The year 1958 held much promise for the United States space program. Both the U.S. and the Soviet Union were preparing to orbit a satellite as part of the International Geophysical Year (IGY), a series of activities planned between July 1957 and December 1958, intended to allow scientists around the world to study the Earth and space through coordinated observations.

Given the Cold War competition between the two superpowers, the first to launch a satellite could claim technological pre-eminence. The Soviet Union leaped ahead of the U.S. and stunned the world when it orbited Sputnik, the world’s first artificial satellite, on Oct. 4, 1957.

The U.S. response to Sputnik was two-fold. The first was to accelerate the Vanguard program, a joint National Academy of Sciences/U.S. Naval Research Laboratory project, which unfortunately resulted in the spectacular and embarrassing launch failure of Vanguard TV3 on Dec. 6.  By that time, the Soviets had already achieved their second success with Sputnik 2, carrying a dog named Layka, the first live animal in space.

BUILT IN 84 DAYS
The ABMA and JPL completed the job of modifying the Jupiter-C to the Juno rocket and building Explorer 1 in 84 days, and it was hoped that 1958 would start off much better than 1957 had ended.

The Juno rocket could trace its ancestry back to the German V-2 rocket, which Von Braun had also designed. Once working in the U.S. after World War II, he used the V-2 to develop the Redstone intermediate range ballistic missile, from which he developed the Jupiter-C as a high-performance three-stage rocket. The addition of a fourth stage created the Juno rocket, capable of launching a satellite into orbit.

Explorer 1 successfully launched from Cape Canaveral’s Pad 26 on Jan. 31, 1958. A team of women mathematicians at JPL computed Explorer’s trajectory and were able to confirm that it was indeed in orbit around the Earth, although its orbit of 224 miles by 1,575 miles was somewhat higher than planned.

WEIGHED 30 LBS
Explorer 1 weighed 30 pounds of which more than 18 pounds were scientific instruments developed under the direction of James Van Allen of the University of Iowa. The instrumentation consisted of a cosmic-ray detector, five temperature sensors and two micrometeoroid detectors. The cosmic ray detector indicated a much lower cosmic ray count than expected.

Van Allen postulated that the instrument was giving these readings because it was actually saturated by energetic charged particles originating mainly in the Sun and trapped by Earth’s magnetic field. Explorer 1’s discovery of these trapped radiation belts, subsequently named after Van Allen, is considered one of the outstanding scientific discoveries of the IGY.

Explorer 1 continued to record and transmit data until its batteries died on May 23, 1958. By then it had been joined in orbit by Explorer 3, also launched on a Juno rocket on March 26 (Explorer 2 failed at launch). Although no longer active, Explorer 1 remained in orbit until March 31, 1970, when it burned up on reentry over the Pacific Ocean.

FIRST IN SERIES
It was not only America’s first satellite in orbit, but also the first of a long-running series of scientific satellites that returned a wealth of useful information about the Earth, its environment, and interactions with the Sun.

The competition between two separate groups to independently develop and orbit the first American satellite contributed to the recognition for the need of a single civilian space organization to plan future efforts. Following lengthy committee hearings, Congress passed the National Aeronautics and Space Act of 1958 on July 16, and President Dwight D. Eisenhower signed it July 29, establishing the National Aeronautics and Space Administration. NASA officially began operating on Oct. 1, 1958.