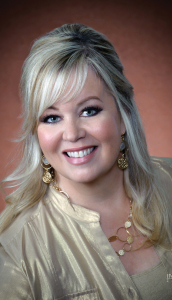 Jana Jacobs Miller has been selected as chairman of the 2015 Lunar Rendezvous Festival, “The Golden Jubilee,”celebrating 50 years of commitment to the Clear Lake-NASA area.

Jana was born in West Texas and in 1968 her family moved to Houston, where her father, now retired, was president of Seatex Corporation, a business that he started 50 years ago.

Raised in Champions in North Harris County, it was while attending Sam Houston State University she met her future husband, Clear Lake native Richard Miller. They have resided in League City since their marriage in 1987. Jana likes to say, “I wasn’t born in the Clear Lake area, but I got here as fast as I could!”

Jana and Richard have two children, Cameron Elizabeth and Trey. In 2006, Cameron was selected to reign as the Lunar Rendezvous Festival queen and in 2009, Trey was selected as captain of the Royal Court, distinguished honors they will always cherish.

Jana and her husband own AER Supply, a second generation global marine distribution company, founded in 1977 and located in Seabrook. AER has supported many local students and charities including Lunar Rendezvous Festival.

Jana is involved with the Bay Area Museum Guild as co-chairman of the Silver Tea this year and co-chairman of Toyland Fantasy in December. The Millers are also members of Lakewood Yacht Club, Bay Harbour United Methodist Church and Sam Houston State University Alumni Association.

Jana is excited to be selected as chairman of the 50th Anniversary Lunar Rendezvous Festival.

“I love Clear Lake and there is nothing that brings this community together like the Lunar Rendezvous Festival. I have loved every minute of my association with this amazing organization and have formed lifelong friendships. I encourage everyone to get involved, start small but start somewhere!”